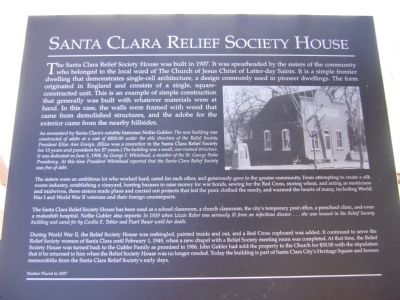 The Santa Clara Relief Society House was built in 1907. It was spearheaded by the sisters of the community who belonged to the local ward of The Church of Jesus Christ of Latter-day Saints. It is a simple frontier dwelling that demonstrates single-cell architecture, a design commonly used in pioneer dwellings. The form originated in England and consists of a single, square-constructed unit. This is an example of simple construction that generally was built with whatever materials were at hand. In this case, the walls were framed with wood that came from demolished structures, and the adobe for the exterior came from the nearby hillsides.

As recounted by Santa Clara's notable historian Nellie Gubler: The new building was constructed of adobe at a cost of $800.00 under the able direction of the Relief Society President Eliza Ann Ensign. (Eliza was a councilor in the Santa Clara Relief Society for 13 years and president for 27 years.) The building was a small, one-roomed structure. It was dedicated on June 5, 1908, by George F. Whitehead, a member of the St. George Stake Presidency. At this time President Whitehead reported that the 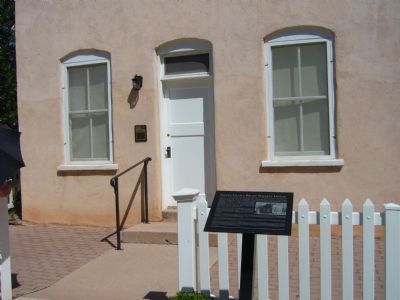 Click or scan to see
this page online
Santa Clara Relief Society was free of debt.

The sisters were an ambitious lot who worked hard, cared for each other, and generously gave to the greater community. From attempting to create a silk worm industry, establishing a vineyard, hosting bazaars to raise money for war bonds, sewing for the Red Cross, storing wheat, and acting as morticians and midwives, these sisters made plans and carried out projects that fed the poor, clothed the needy, and warmed the hears of many, including World War I and World War II veterans and their foreign counterparts.

The Santa Clara Relief Society House has been used as a school classroom, a church classroom, the city's temporary post office, a preschool clinic, and even a makeshift hospital. Nellie Gubler also reports: In 1939 when Lizzie Rebar was seriously ill from an infectious disease…she was housed in the Relief Society building and cared for by Cecilia E Tobler and Pearl Bauer until her death. 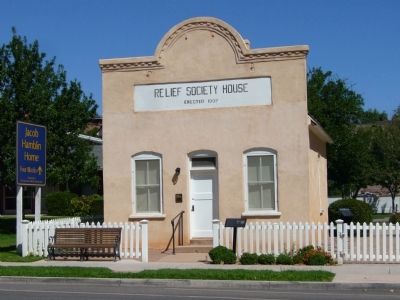 Topics. This historical marker is listed in these topic lists: Charity & Public Work • Churches & Religion • Women. A significant historical date for this entry is February 1, 1949.