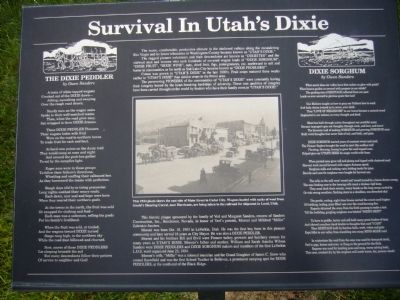 The warm comfortable productive climate in the sheltered valleys along the meandering Rio Virgin and its lower tributaries in Washington County became known as "Utah's Dixie".
The rugged pioneer colonizers and their descendants are known as "Dixieites" and the stalwart men and women who took hundreds of covered wagon loads of "Dixie sorghum", "Dixie fruit", "Dixie wine", nuts, dried fruits, figs, pomegranates, etc. northwards to sell and barter in communities as far north as Salt Lake City became known as "Dixie Peddlers".
Cotton was grown in "Utah’s Dixie" in the late 1800’s. Fruit crops matured three weeks earlier in Utah’s Dixie than similar crops in the Provo area.
The preserving pioneers of the communities of "Utah’s Dixie" were constantly having their integrity honed by the heartbreaking hardships or adversity. These rare qualities of integrity have been carried through out the world by leaders throughout the world by leaders who have their family roots in "Utah’s Dixie".

A Picture in the center.
This 1924 photo shows the east side of Main Street 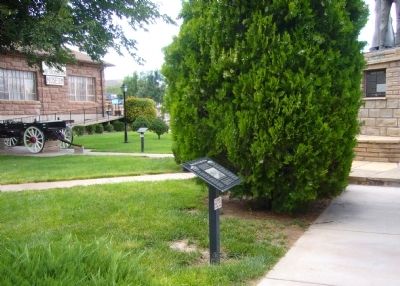 Click or scan to see
this page online
in Cedar City. Wagons loaded with sacks of wool from a sheering corral near Hurricane are being taken to the railroad for shipment in Lund, Utah.

This historic plaque is sponsored by the family of Verl and Margaret Sanders, owners of Sanders Construction of Henderson, Nevada, in honor of Verl’s parents, Moroni and Mildred (Millie) Zabriskie Sanders.
Moroni was born Oct. 18, 1903 in LaVerkin, Utah. He was the first boy born in this pioneer community and later served 16 years as City Mayor. He was also a Dixie peddler.
Moroni and his brothers, Bill and Ervil were pioneer turkey growers, and hatchery owners for many years in Utah’s Dixie. Moroni’s father and mother, were William and Sara Amelia Wilson Sanders, were Dixie peddlers and Dixie sorghum makers and members of the first LaVerkin LDS Ward organized in June 23, 1904.
Moroni’s wife, Mille, was a talented musician and granddaughter of James C. Snow who owns Snow Field and was the first school teacher in Belview, a prominent camping spot for Dixie peddlers, at the south end of the Black Ridge.

On the left a poem “The Dixie Peddler” by Owen Sanders.
“A train of white topped wagons creaked out at Dixie dawn, jolting, squeaking and swaying over the rough road drawn.
Sturdy men on the wagon seats Spoke to their well-matched teams; Then, when the road grew easy, Sat wrapped in their Dixie dreams.
These Dixie peddler pioneers, their wagons, filled with fruit, were on the road to northern towns to trade fruit for cash and boot.
At hard won points on the dusty trail They would camp at noon and night and around the grub box gather to eat by the campfire light.
Eager sons were in these groups to follow their fathers’ directions, whistling and scuffling; their calloused feet as they harnessed the teams with perfection.
Rough days slid by with tiring procession; long nights soothed their weary souls. Each dawn, new zeal and hope were born when they neared their northern goals.
At the towns in the north, the fruit was sold or swapped for clothing or food. -- Each man was a salesman selling, his goods for his family’s livelihood.
When the fruit was sold, or traded, and the wagons toward Dixie turned, songs rang high in the northern sky while the road dust billowed and churned.
Now scores of these Dixie peddlers lie sleeping beneath the sod, but many descendants follow their pattern of service to neighbor and God!

On the right a poem “Dixie Sorghum” by Owen Sanders.
“What secret does our valley have that makes us glow with pride? What beacon guides us on with purpose in our stride? The guiding star of heritage collected from our past leads us ever onward to goals that last!
Our mothers taught us how to pray, our fathers, how to work, and daily duty trained us to never shirk. Thus "Love of Neighbors" in our towns became a natural creed. Implanted in our actions; in every thought and deed.
Mem'ries built through action throughout our youthful years became impinged upon our thoughts through work, and love, and tears! The tiresome task of making sorghum and growing sorghum cane, built vivid thought that never fades of toil, and faith, and pain.
Dixie sorghum started years of constant sweat and moil; The Pioneer settlers brought the seed to start this endless toil! Planting, thinning, hoeing to grow the seed topped cane helped give our Utah’s Dixie its magic worldwide fame.
When jointed cane grew tall and plump and clustered seed, harvest work moved forward with urgent autumn speed. Sorghum mills and cooking vats; holding tanks for juice, and cans for sorghum ware brought for harvest use.
The rolls on the mill went around and around, turned by a horse drawn sweep; The men feeding cane to the turning rolls must a tireless vigil keep. They must duck their sweaty, weary hands as the long sweep circles by or risk seeing countless, flashing stars in a cloudless, sun drenched sky!
The gentle cooling night-time breeze carried the sweet smell higher, above the bubbling, boiling, juice filled vats, over the wood burning fire. Experts skimmed the scum from the froth, pausing to make a test of the bubbling, boiling sorghum that was labeled "Dixie’s best!"
To have to peddle, barter, and sell built many great leaders of man and altered countless timid doubts to thoughts that said, “I can.” Thus heritage built by fearless faith, work, vision, and guts kept folks in our valley from stumbling into many mind-made ruts!
In winter time the seed from the sorghum cane was used for farm yard stock; fed to pigs, horses, and cows or flung on the ground for the flock. Bagasse was used for lambing pens, and snug warm calving beds; This cane crushed dry by the sorghum mill made warm dry pioneer sheds.

Topics. This historical marker is listed in these topic lists: Agriculture • Settlements & Settlers. A significant historical month for this entry is June 1813.