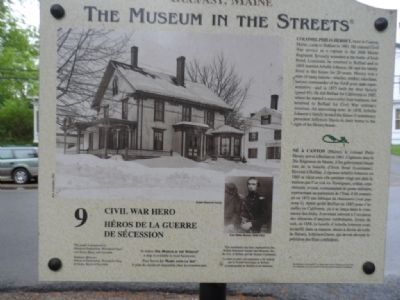 Photographed By James True, May 29, 2012
1. Civil War Hero Marker
Inscription.
, Colonel Philo Hersey, born in Canton, Maine, came to Belfast in 1861. He entered Civil War service as a captain in the 26th Maine Regiment. Severely wounded at the battle of Irish Bend, Louisiana, he returned to Belfast and in 1865 married Arabella Johnson. He and his family lived in this house for 20 years. Hersey was a man of many talents--teacher, soldier, merchant, lawyer, commander of the GAR post, state representative--and in 1875 built the shoe factory (panel #1). He left Belfast for California in 1885, where he started a successful fruit business, but returned to Belfast for Civil War veteran's reunions. An interesting note: In 1858, Arabella Johnson's family hosted the future Confederacy president Jefferson Davis in their home to the right of the Hersey house., . This historical marker was erected in 2004 by The Museum in the Streets®. It is in Belfast in Waldo County Maine