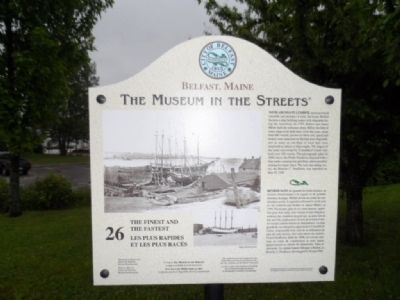 Photographed By James True, May 29, 2012
1. The Finest and the Fastest Marker
Inscription.
, The abundant lumber, steam-powered sawmills and stretches of wide, flat beach, Belfast became a ship building center with shipyards lining the waterfront. In 1793, Robert and James Miller built the schooner Jenny Miller, the first of many ships to be built here. Over the years, more than 600 vessels, known for their size, speed and beauty were launched by Belfast area shipyards, and as many as one-third of the local men were employed as sailors or shipwrights. The largest of the yards was owned by Columbia P. Carter who built over 100 vessels. This photograph, taken in 1908, shows the Fields Pendleton shipyard with a ship under construction and three others possibly waiting for repair., . This historical marker was erected in 2004 by The Museum in the Streets®. It is in Belfast in Waldo County Maine