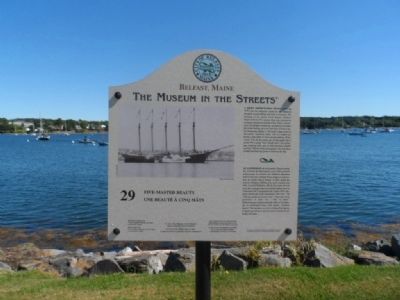 Photographed By James True, September 1, 2012
1. Five-Masted Beauty Marker
Inscription.
, A brief shipbuilding boom following world war one put the shipyard owned by the Mathews Brothers woodworking mill back in business. The building of the Jennie Flood Kreger, Belfast's largest and only five-masted ship, was overseen by company president Orlando Frost. Frost's eleven-year-old daughter, Katherine, recorded in her diary the events leading up to the festivities of launch day. On Wednesday March 5, 1919 with a large crowd in attendance, Katherine wrote, "All of a sudden we heard a man shout to some of the people getting off the vessel, 'Get off that plank, get off that plank! She's going! She's going!' Sure enough, there was a grinding, creaking noise and we were moving, actually moving!" Shown in this photograph is the steamboat Golden Rod ferrying guests to and from the ship., . This historical marker was erected in 2004 by The Museum in the Streets®. It is in Belfast in Waldo County Maine