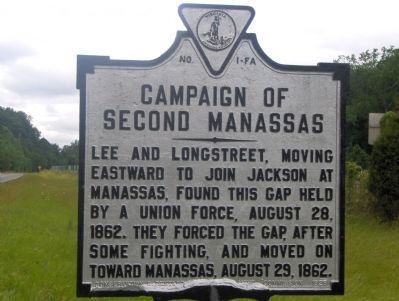 By Roger Dean Meyer, June 3, 2006
1. Campaign of Second Manassas Marker
Inscription.
Campaign of Second Manassas. . Lee and Longstreet, moving eastward to join Jackson at Manassas, found this gap held by a Union force, August 28, 1862. They forced the gap, after some fighting, and moved on toward Manassas, August 29, 1862. . This historical marker was erected in 1928 by Conservation & Development Commission. It is Near Broad Run in Fauquier County Virginia

Lee and Longstreet, moving eastward to join Jackson at Manassas, found this gap held by a Union force, August 28, 1862. They forced the gap, after some fighting, and moved on toward Manassas, August 29, 1862. 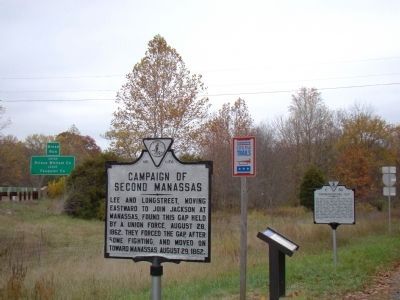 Additional commentary.
1. One Soldier’s Story
Transcription of text on interpretative sign on photo No. 3

W.H. Andrews of the Georgia Regulars described the fighting that took place at this spot on August 28, 1862:

“The [ridge] ... was covered with trees and bushes so that you could not see any distance ahead ... When within 50 fee of the [quarry] ... the air was so full of lead, I dropped on my hands and knees and crawled ... until I reached the ditch. I then poked my gun over the loose dirt and fired.

“I was near enough to the federal line to have touched bayonets with the man in front of me ... [The Federals were positioned along the far] edge of the ditch in a solid line of battle, 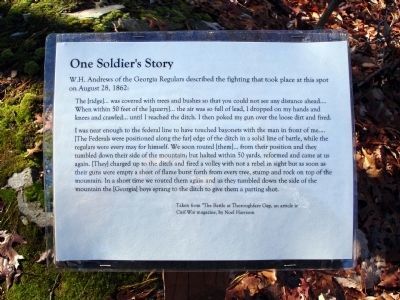 November 17, 2006
3. One Soldier's Story
Informational marker along the Bull Run Mountains Conservancy trail near Beverley's Mill.
while the regulars were every may for himself. We soon routed [them] ... from their position and they tumbled down their side of the mountain; but halted within 50 yards, reformed and came at us again. [They] charged up to the ditch and fired a volley with not a rebel in sight but as soon as their guns were empty a sheet of flame burst forth from every tree, stump and rock on top of the mountain. In a short time we routed them again and as they tumbled down the side of the mountain the [Georgia] boys sprang to the ditch to give them a parting shot.”

Taken from “The Battle of Thoroughfare Gap,” an article in Civil War magazine by Noel Harrison. Note To Editor only visible by Contributor and editor
— Submitted December 2, 2008. 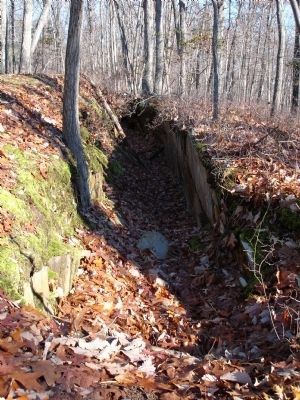 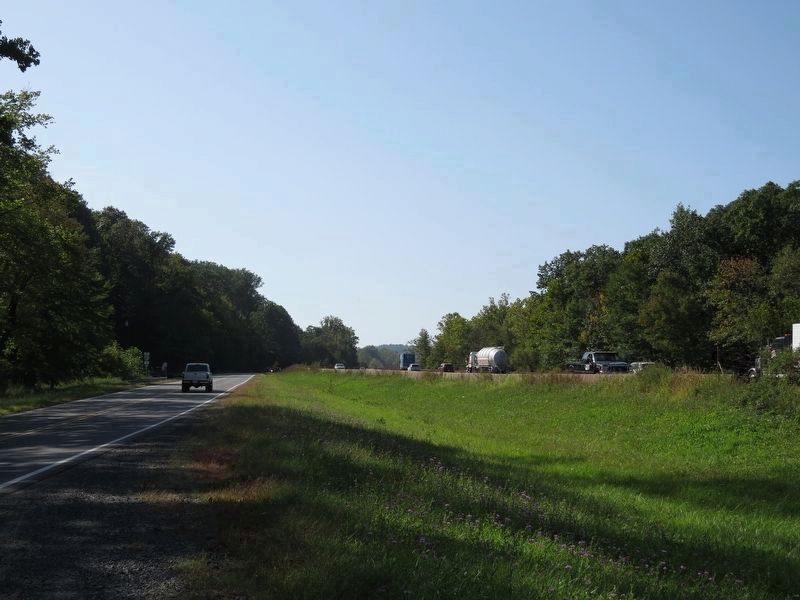