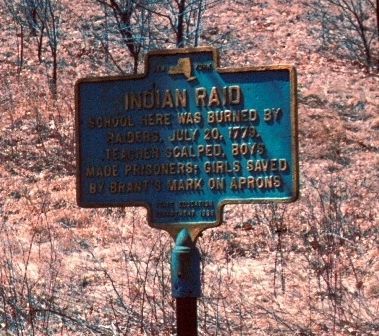 By Bruce T. Crandall, circa May 1965
1. Indian Raid Marker
Inscription.
Indian Raid. . School here was burned by raiders July 20, 1779. Teacher scalped, boys made prisoners; girls saved by Brant's mark on aprons. . This historical marker was erected in 1936. It is in Port Jervis in Orange County New York

Topics. This historical marker is listed in these topic lists: Native Americans • War, US Revolutionary. A significant historical date for this entry is July 20, 1985.