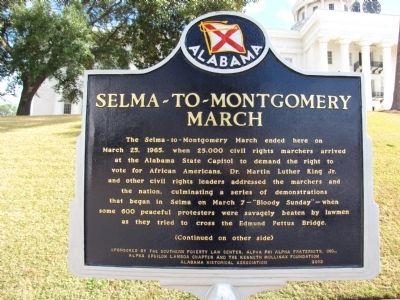 Side A
The Selma-to-Montgomery March ended here on March 25, 1965, when 25,000 civil rights marchers arrived at the Alabama State Capitol to demand the right to vote for African Americans. Dr. Martin Luther King Jr. and other civil rights leaders addressed the marchers and the nation, culminating a series of demonstrations that began in Selma on March 7 - "Bloody Sunday" - when some 600 peaceful protesters were savagely beaten by lawmen as they tried to cross the Edmund Pettus Bridge.
(Continued on other side)