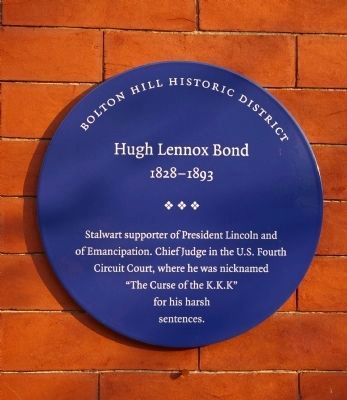 By Christopher Busta-Peck, March 22, 2008
1. Hugh Lennox Bond Marker
Inscription.
Hugh Lennox Bond. Stalwart supporter of President Lincoln and of Emancipation. Chief Judge in the U.S. Fourth Circuit Court, where he was nicknamed "The Curse of the K.K.K" for his harsh sentences. . This historical marker was erected by Bolton Hill Historic District. It is in Baltimore Maryland

Stalwart supporter of President Lincoln and of Emancipation. Chief Judge in the U.S. Fourth Circuit Court, where he was nicknamed "The Curse of the K.K.K" for his harsh sentences.

Additional comments.
1. Commentary on Judge Bond, Where He Lived, The Placement of This Marker, and His Sentences
First of all, please allow me to state that, as a lifelong admirer of Judge Bond as judge, humanitarian (he founded the Baltimore Association for the Moral and Educational Improvement 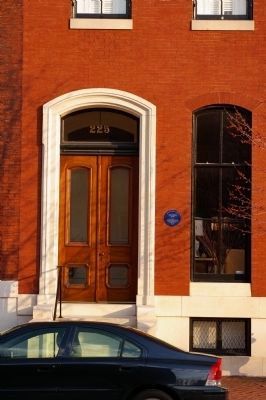 By Christopher Busta-Peck, March 22, 2008
2. Hugh Lennox Bond House with Marker
of the Colored People, which was a sort of Maryland Freedmen’s Bureau, thereby enabling freed slaves to be educated) and early civil rights leader, I deeply appreciate the fact that he is not altogether forgotten; I am very happy and grateful that a marker was erected in his memory.

That said, although it is true that Judge Bond, his wife, and their three small children did have a residence on Lanvale Street for several years and can be found there in the 1870 U.S. Census, his TRUE home (the place at which he was born, the place which he considered his primary residence, and the place where he died) was the Mount Royal estate, home of his maternal grandfather, Dr. Solomon Birckhead, and subsequently that of his mother, Mrs. Christiana Birckhead Bond. It is located at 2001 Park Avenue (northeast corner Park Avenue and Reservoir Street), Baltimore, Maryland, only a few blocks north of the Lanvale Street location deemed appropriate for this marker. I had offered to pay the fee for placement of the marker where it rightfully belongs, at the Mount Royal estate, but was told that it had already been paid for at the Lanvale Street location. I therefore ask the inscription be amended so that the viewer will be directed to 2001 Park Avenue as well.

The Mount Royal estate was built sometime during the 18th Century, date unknown. It is one of Baltimore's last surviving estates of that era and therefore is of historical significance aside from its link to the judge. Its previous owner, Dr. Birckhead, and his son-in-law, Dr. Thomas Emerson Bond, were eminent physicians and saved many Baltimoreans' lives in epidemics such as yellow fever, risking their own lives in the process.

It may be that since, at the time of the KKK trials, Judge Bond had a wife and three young boys, and since he had received hate mail and death threats for his unpopular championing 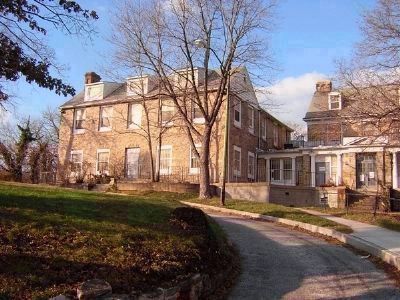 Courtesy Reservoir Hill Improvement Council
3. The Mount Royal Estate
It is at 2001 Park Avenue, a few blocks north of this historical marker. Home of his maternal grandfather, Dr. Solomon Birckhead, and subsequently that of his mother, Mrs. Christiana Birckhead Bond; it is the place at which he was born, the place which he considered his primary residence, and the place where he died. Today the offices of Reservoir Hill Improvement Council are located here.
of African-American causes, he considered it safer and more prudent for his family to take up residence on Lanvale Street, which was in the City of Baltimore, rather than in the then remote hilltop estate out in the county (North Avenue was the line separating city from county). When the children grew older, the family relocated to Mount Royal.

Possibly it was deemed “politically incorrect” to place the judge’s marker outside the limits of “Bolton Hill,” i.e., north of North Avenue, in adjacent “Reservoir Hill.” I lived on the north side of West North Avenue at Bolton Street in the Mount Royal area, consisting of both “Bolton Hill” and “Reservoir Hill,” from the age of two until fully grown, when I relocated from Maryland. The names of both districts are of relatively recent vintage and are misnomers; the area’s correct name is Mount Royal, named after the Birckhead/Bond estate. It is true that the portion south of North Avenue did have its great fabled estates, including Bolton and Rose Hill (they were maintained by slave labor), Sadly, neither exists today. The famous Mount Royal Garden Club Blue Book, published in 1937, makes it very clear that the neighborhood’s name is Mount Royal, and the Mount Royal house itself in that fine volume is called “beautiful.” Indeed, the association which so ably represents the interests of residents of “Bolton Hill” has seen fit to retain its original name: the Mount Royal Improvement Association, formerly the Mount Royal Protective Association (which I remember very well).

Secondly, while it is true that the Klan members feared Judge Bond because he was courageous and determined to end their reign of terror, and not even death threats would deter him from presiding over the “hot potato” trials, I respectfully protest 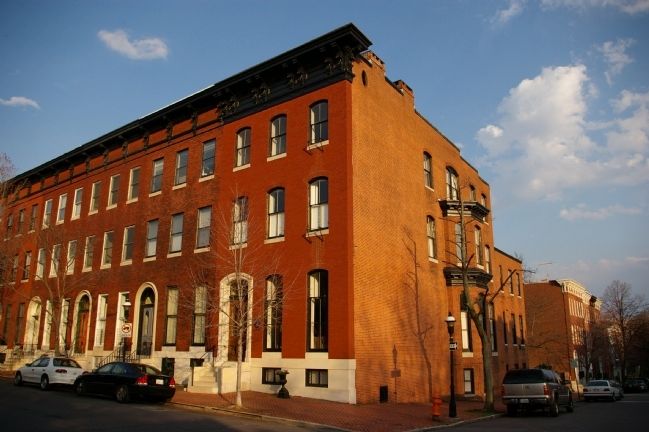 By Christopher Busta-Peck, March 22, 2008
4. Hugh Lennox Bond house
the description of his KKK sentences as “harsh.” If you read accounts of the trials themselves—and they are online as well as in bound books—you will see that he was as lenient as possible with the convicted youthful poor and uneducated farmer offenders, realizing that they were merely part of the southern feudal system, and were forced to do their terrible deeds out of intimidation by the wealthy plantation owners for whom they worked. This latter group received the “harsher” monetary and prison sentences. Judge Bond was a fair and compassionate judge. No doubt he surprised the prosecution by not always agreeing with them, that is, not taking the standard “Radical Republican” view but rather the states’ rights view of the constitutional issues involved. In his sentencing, he took each convicted person’s circumstances into consideration; some received short prison terms; some received light fines; some defendants were even acquitted. Note To Editor only visible by Contributor and editor
— Submitted September 20, 2008, by Rita Janice Traub of Atlanta, Georgia.