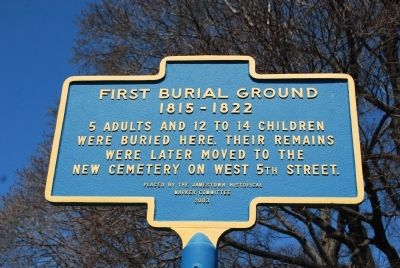 Photographed By Mike Wintermantel, April 21, 2013
1. First Burial Ground Marker
Inscription.
First Burial Ground. 5 adults and 12 to 14 children were buried here. Their remains were later moved to the new cemetery on West 5th Street. . This historical marker was erected in 2003 by Jamestown Historical Marker Committee. It is in Jamestown in Chautauqua County New York

5 adults and 12 to 14 children were buried here. Their remains were later moved to the new cemetery on West 5th Street.

Location. 42° 5.782′ N, 79° 14.839′ W. Marker is in Jamestown, New York, in Chautauqua County. Marker is at the intersection of West 4th Street and Clinton Street, on the right when traveling west on West 4th Street. Located on the southwest corner of Baker Park. Touch for map. Marker is in this post office area: Jamestown NY 14701, United States of America. Touch for directions. 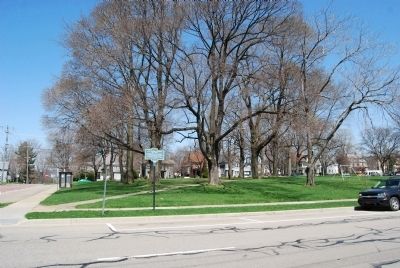 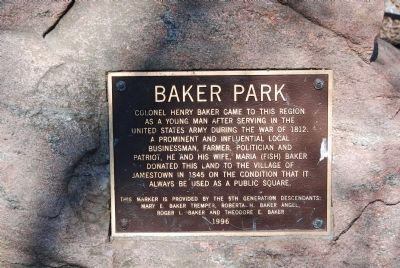 Photographed By Mike Wintermantel, April 21, 2013
3. Baker Park marker
Located on a rock in the center of Baker Park: Colonel Henry Baker came to this region as a young man serving in the United States Army during the War of 1812. A prominent and influential businessman, farmer, politician and patriot, he and his wife Maria (Fish) Baker donated this land to the Village of Jamestown in 1845 on the condition that it always be used as a public square. 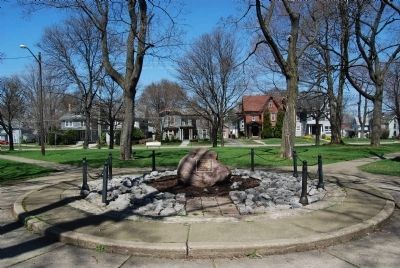