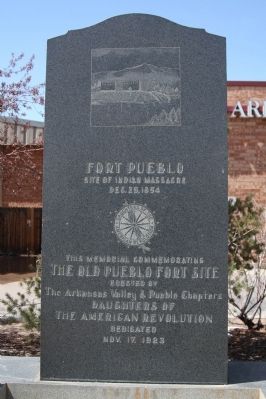 On Christmas Day, 1854, a massacre occurred at Fort Pueblo on the Arkansas. The fifteen men of the fort were killed and one woman (Chepita) and two boys carried away by the Indians.

Erected 1923 by The Arkansas Valley and Pueblo Chapters, Daughters of the American Revolution.

Topics and series. This historical marker is listed in these topic lists: Forts and Castles • Native Americans • Settlements & Settlers. In addition, it is included in the Daughters of the American Revolution series list. A significant historical date for this entry is October 17, 1923.

Other nearby markers. At least 6 other markers are within 13 miles of this marker, measured as the crow flies. Teresita Sandoval (about 300 feet away, measured in a 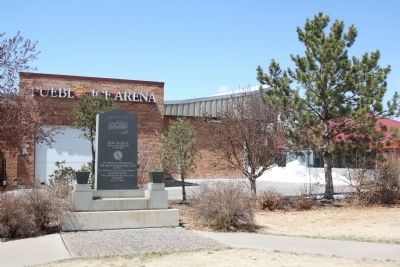 More about this marker. The current marker appears to be a new replacement of the 1926 marker and does not have the second paragraph text on it. The original stone monument and its full text is described on page 81 of the Junann Stieghorst’s 1978 Colorado Historical Markers.

Regarding Fort Pueblo. The entry in the 1978 book Colorado Historical Markers by Junann Stieghorst reports that this monument was originally located west of City Hall on City Hall Place, but was moved to this location because the original site was not the site of Fort Pueblo.

Also see . . .  The Massacre at Old Fort El Pueblo. F.W. Cragin’s 1908 account of the massacre. “On a spot now in the heart of the City of Pueblo, Colorado, and which was then just outside of the limit of the Republic of Mexico—a spot not far from the left bank of the Arkansas river, but whose close vicinity that fickle stream has now long since forsaken—a small colony of Americans, in 1842, built and occupied an adobe-walled fort, as a place of domicile, farming and trading. ...” (Submitted on April 24, 2013.) 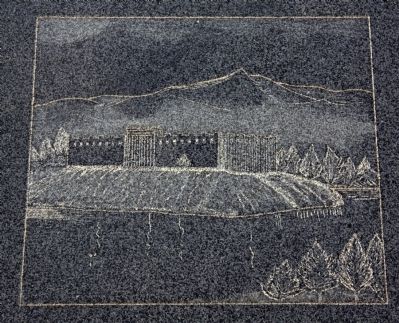 By J. J. Prats, April 18, 2013
3. Image of Fort Pueblo Etched on the Monument
Tragedy 1854”
Text of brass plaque in the lobby of the El Pueblo History Museum nearby. Plaque includes bas relief of the fort.

In MEMORY and RECOGNITION of those courageous Hispanics of Mejicano heritage, who along with Native Americans lost their lives on Christmas 1854.

Editor’s want-list for this marker. Photo of the original monument • Photo of the plaque quoted in Comment 1 and of its environs in the museum • Can you help?
Share This Page.