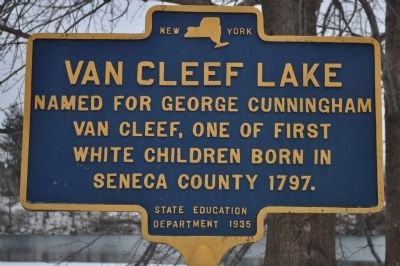 Named for George Cunningham Van Cleef, one of the first white children born in Seneca County 1797.

Topics. This historical marker is listed in these topic lists: Settlements & Settlers • Waterways & Vessels. A significant historical year for this entry is 1797. 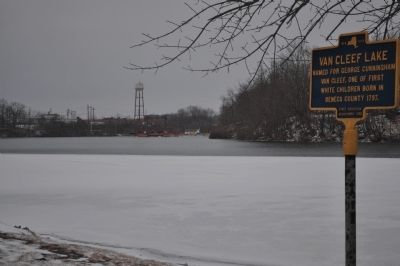 By Yugoboy, February 21, 2013
2. Van Cleef Lake Marker and Lake
If you look carefully in the far distance, the lock at Seneca Falls is just barely visible.

Click or scan to see
this page online
(about 700 feet away); The Albert Cook Memorial (approx. 0.2 miles away). Touch for a list and map of all markers in Seneca Falls.

Regarding Van Cleef Lake. Van Cleef Lake is a man-made lake created by damming the actual falls that gave Seneca Falls its name. The Seneca River no longer has falls, but does have a multi-stage lock constructed at the east end of the lake which allows for successful navigation of the river, connecting it to the Erie Canal, and thus the Atlantic Ocean. 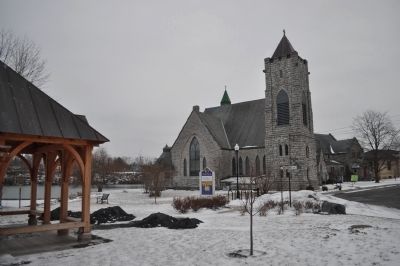 By Yugoboy, February 21, 2013
3. Van Cleef Lake Marker as seen from near Fall Street
If you look carefully between the supports of the pavilion at left, you'll see the marker. 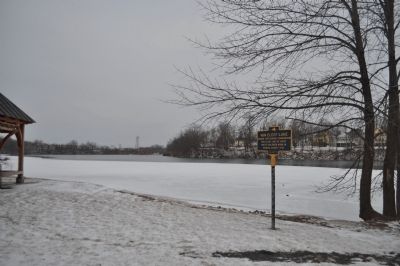