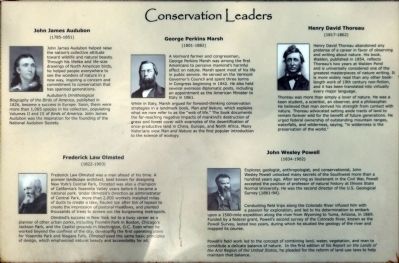 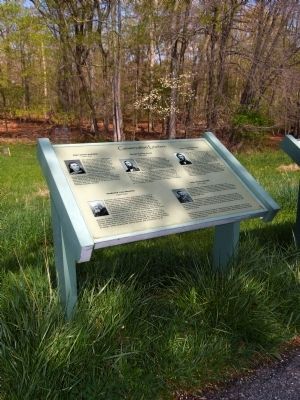 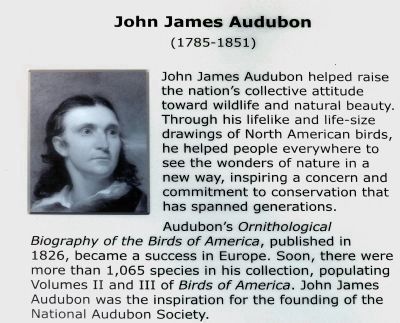 By Allen C. Browne, April 20, 2013
3. John James Audubon
(1785-1851)
John James Audubon helped raise the nation's collective attitude toward wildlife and natural beauty. Through his lifelike and life-size drawings of North American Birds, he helped people everywhere to see the wonders of nature in a new way, inspiring a concern and commitment to conservation that has spanned generations.

Audubon's Ornithological Biography of Birds in America, published in 1826, became a success in Europe. Soon, there were more than 1,065 species in his collection, populating Volumes II and III of Birds of America. John James Audubon was the inspiration for the founding of the National Audubon Society. 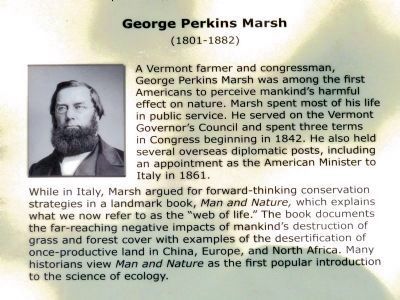 By Allen C. Browne, April 20, 2013
4. George Perkins Marsh
(1801-1882)
A Vermont farmer and congressman, George Perkins Marsh was among the first Americans to perceive mankind's harmful effect on nature. Marsh spent most of his life in public service. He served on the Vermont Governor's Council and spent three terms in Congress beginning in 1842. He also held several overseas diplomatic posts, including an appointment as the American Minister to Italy in 1861.

While in Italy, Marsh argued for forward-thinking conservation strategies in a landmark book Man and Nature, which explains what we now refer to as the "web of life." The book documents the far-reaching negative impacts of mankind's destruction of grass and forest cover with examples of the desertification of once-productive land in China, Europe and North Africa. Many historians view Man and Nature as the first popular introduction to the science of ecology. 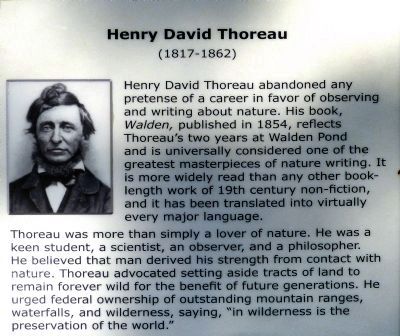 By Allen C. Browne, April 20, 2013
5. Henry David Thoreau
(1817-1862)
Henry David Thoreau abandoned any pretense of a career in favor of observing and writing about nature. His book, Walden, published in 1854, reflects Thoreau's two years at Walden Pond and is universally considered one of the greatest masterpieces of nature writing. It is more widely read than any other book-length work of 19th century non-fiction, and has been translated into virtually every major language.

Thoreau was more than simply a lover of nature. He was a keen student, a scientist, an observer, and philosopher. He believed that man derived his strength form contact with nature. Thoreau advocated setting aside tracts of land to remain forever wild for the benefit of future generations. He urged federal ownership of outstanding mountain ranges, waterfalls, and wilderness, saying "in wilderness is the preservation of the world." 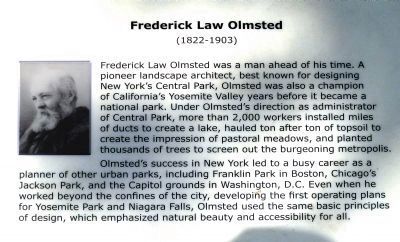 By Allen C. Browne, April 20, 2013
6. Frederick Law Olmsted
(1822-1903)
Frederick Law Olmsted was a man ahead of his time. A pioneer landscape architect, best known for designing New York's Central Park, Olmsted was also a champion of California's Yosemite Valley years before it became a national park. Under Olmsted's direction as administrator of Central Park, more that 2,000 workers installed miles of ducts to create a lake, hauled ton after ton of topsoil to create the impression of pastoral meadows, and planted thousands of trees to screen out the burgeoning metropolis.

Olmsted's success in New York led to a busy career as a planner of other urban parks, including Franklin Park in Boston, Chicago's Jackson Park, and the Capitol grounds in Washington D.C. Even when he worked beyond the confines of the city, developing the first operating plans for Yosemite Park and Niagara Falls, Olmsted used the same basic principles of design, which emphasized natural beauty and accessibility for all. 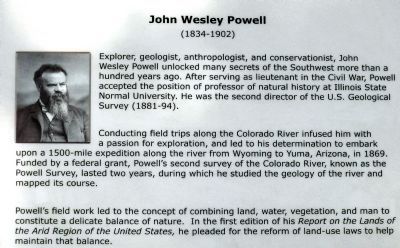 By Allen C. Browne, April 20, 2013
7. John Wesley Powell
(1834-1902)
Explorer, geologist, anthropologist, and conservationist, John Wesley Powell unlocked many secrets of the Southwest more than a hundred years ago. After serving as lieutenant in the Civil War, Powell accepted the position of professor of natural history at Illinois State Normal University. He was the second director of the U.S. Geological Survey (1881-94)

Conducting field trips along the Colorado River infused him with a passion for exploration, and led to his determination to embark upon a 1500-mile expedition along the river from Wyoming to Yuma, Arizona, in 1869. Funded by a federal grant, Powell's second survey of the Colorado River, known as the Powell Survey, lasted two years, during which he studied the geology of the river and mapped its course.

Powell's field work led to the concept of combining land, water, vegetation, and man to constitute a delicate balance of nature. In the first edition of his Report of the Lands of the Arid Region of the United States, he pleaded for the reform of land-use laws to help maintain that balance.
More. Search the internet for Conservation Leaders.