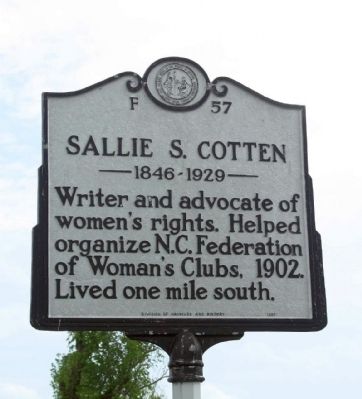 By Mike Stroud, April 19, 2013
1. Sallie S. Cotten Marker
Inscription.
Sallie S. Cotten.
Writer and advocate of women's rights. Helped organize N.C. Federation of Women's Clubs, 1902. Lived one mile south. . . This historical marker was erected in 1987 by Division of Archives and History. It is in Bruce in Pitt County North Carolina

Erected 1987 by Division of Archives and History. (Marker Number F-57.) 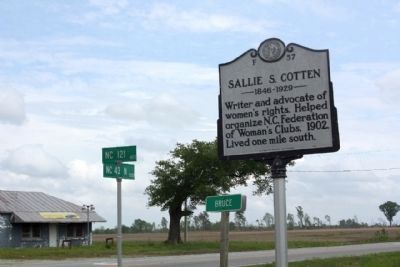 By Mike Stroud, April 19, 2013
2. Sallie S. Cotten Marker at the intersection of North Carolina Route 43 and North Carolina Route 121
Sallie Swepson Sims Southall Cotten (1846-1929) moved from her native Virginia to Murfreesboro, North Carolina, as a child. She was educated at Wesleyan Female College and Greensboro Female College, from which she was graduated in 1863. Three years later she married Robert Randolph Cotten, Confederate veteran and Edgecombe County native. Cotten operated a dry goods and grocery store in Tarboro for a short time but, by 1872, was in a similar business in Wilson. His true desire was to be a planter and he acquired two plantations, to be known as "Cottendale" and "Southwood," seven miles outside Greenville in the 1870s. Although the couple and their children remained in Wilson for ten years, it was in Pitt County that they spent the rest of their years.

Mrs. Cotten’s first twenty-seven years of married life were domestic, devoted to her home and her seven children. As she wrote in a letter to a friend, “No time for anything but stitch, stitch, stitch.” In 1893 their neighbor (and later governor) Elias Carr engineered her appointment as a “lady manager” for North Carolina at the Chicago World’s Fair. There she met women from across the country involved in the growing “woman movement.” The experience made her a public figure and she “never lost her statewide prominence thereafter,” according to her biographer William Stephenson. 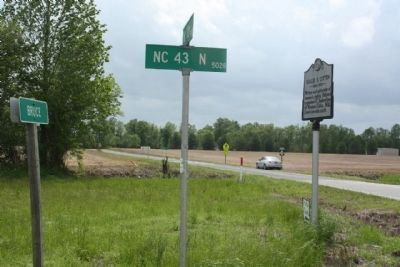 In 1902 Mrs. Cotten helped organize the North Carolina Federation of Women’s Clubs, and, for the rest of her life, was devoted primarily to that organization. In her history of the group published in 1925, she opened with these words: “What has been known as the Woman’s Movement was a revolution—bloodless but not purposeless.” Mrs. Cotten also belonged to the United Daughters of the Confederacy, the King’s Daughters, and the North Carolina Literary and Historical Association. She long maintained an interest in the Roanoke colonies and attempted to establish the Virginia Dare School of domestic sciences and occupational training for women. That effort failed, but her interest led to the publication of a long narrative poem about Virginia Dare called The White Doe (1901).

In 1928, at age eighty-two, Mrs. Cotten was introduced to a meeting of women in Boston as the “Julia Ward Howe of the South.” Anne Firor Scott in 1971 wrote that she “exemplified the evolution from the Southern lady of the old school to the new women’s leader who performed a vital role in Southern social and political history.” Dormitories at the University of North Carolina at Greensboro and East Carolina University are named for her and, during World War II, a Liberty freighter, commissioned at Wilmington by the North Carolina Shipbuilding Corporation, bore her name. (North Carolina Office of Archives & History — Department of Cultural Resources)