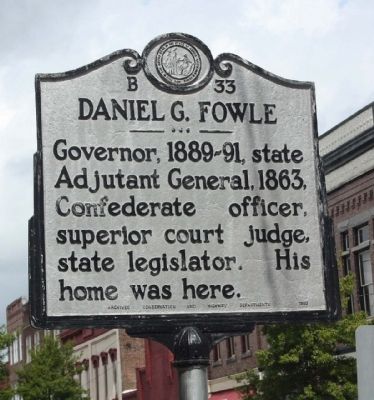 Erected 1953 by Archives Conservation and Highway Departments. (Marker Number B-33.)

Location. 35° 32.579′ N, 77° 3.434′ W. Marker is in Washington, North Carolina, in Beaufort County. Marker is on West Main Street near South Respess Street, on the right when traveling south. Touch for map. Marker is in this post office area: Washington NC 27889, United States of America. Touch for directions. 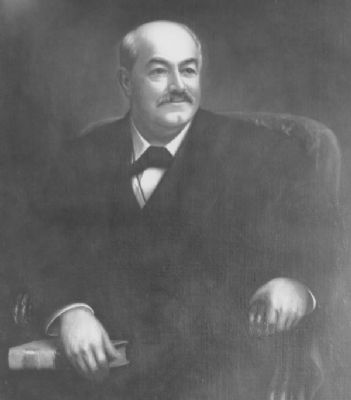 Regarding Daniel G. Fowle.   The first governor to occupy the new Executive Mansion, Daniel Gould Fowle (1831-1891) died just over two years into his term of office. The fourth child of Samuel Richardson and Martha Marsh Fowle, he was born in the Beaufort County town of Washington. Young Daniel, who loved the outdoors, attended Washington Academy until the age of fourteen and then traveled to Orange County to study at the Bingham School. After graduation from Princeton University in 1851, Fowle entered the law school of Judge Richmond M. Pearson. In 1854 he established a law practice in Raleigh. On April 15, 1856, Fowle married Ellen Brent Pearson, daughter of Judge Pearson. She died in 1862 leaving him two daughters. Fowle remarried in 1867; with his new bride, the former Mary E. Haywood of Raleigh, he had four more children. She did not live long enough to move into the mansion.

Fowle strongly opposed secession as the sectional crisis deepened, yielding only when it became an accomplished fact. Volunteering initially for the “Raleigh Rifles,” Fowle served as an officer in several regiments 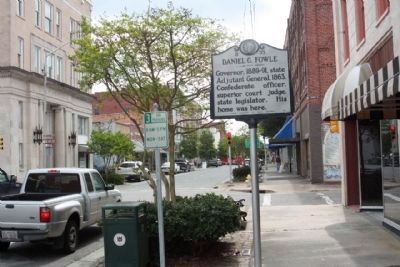 By Mike Stroud, April 19, 2013
3. Daniel G. Fowle Marker along West Main Street, looking south
before being captured at Roanoke Island in February 1862. He was paroled on the condition that he not engage in further hostilities against the United States government.

In October 1862 Wake County voters elected Democrat Fowle to the state House. Governor Zebulon B. Vance appointed him state adjutant general with the rank of major general on March 14, 1863, but he resigned that post four months later. He won election to a second term in the legislature in 1864, and three months after the completion of the session in 1865, Provisional Governor {William W. Holden, H-92] appointed him judge of the superior court. The General Assembly that convened in the fall of 1865 elected Fowle to the permanent position of superior court judge; he resigned in December of 1867 rather than rubber stamp decisions of the military commander during Reconstruction.

Fowle returned to his law practice and in 1880 lost to Thomas Jarvis in his bid for the governorship; in 1884 he lost a race for a seat in Congress. A split in the Democratic Party over favoritism to business and industry gave him an opportunity at the governor’s seat in 1888. Supported by the “Liberal Democrats,” he was elected on a platform that promised regulation of the railroad industry. Heavy rain forced his inauguration indoors, and on January 17, 1889, Daniel G. Fowle took the oath of office in 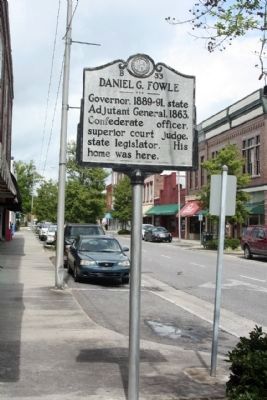 Fowle’s tenure as governor suffered a temporary setback when the 1889 General Assembly reversed promises of railroad reform by refusing to pass the railroad commission bill. Fowle found himself in the middle of a power struggle between industry interests that wanted protection from unfavorable legislation and a growing populist movement that demanded changes in the system. He could do little but try to smooth ruffled feathers. The “farmers” legislature of 1891 did establish a railroad commission over which the governor was to preside, but Fowle did not live to exercise his influence.

In educational endeavors, Fowle was more successful. He recommended a tax levy in counties unable to sustain the public schools for the required four months and proposed a state university for women. The legislature chartered the State Normal and Industrial School for Women (present University of North Carolina at Greensboro) in February 1891.