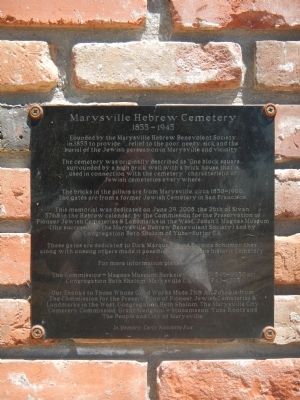 Founded by the Marysville Hebrew Benevolent Society in 1853 to provide “...relief to the poor, needy, sick and the burial of the Jewish persuasion in Marysville and the vicinity.”

The cemetery was originally described as “One block square... surrounded by a high brick wall with a brick house that is used in connection with the cemetery." characteristic of Jewish cemeteries everywhere.

The bricks in the pillars are from Marysville circa 1850-1900. The gates are from a former Jewish Cemetery in San Francisco.

This memorial was dedicated on June 29, 2008, the 26th of Sivan, 5768 in the Hebrew calendar, by the Commission for the Preservation of Pioneer Jewish Cemeteries & Landmarks in the West. Judah I. Magnes Museum (the successor to the Marysville Hebrew Benevolent Society) and by Congregation Beth Shalom of Yuba-Sutter CA.

These gates are dedicated to Dick Marguette and Bernice Schumer. They along with unsung others made it possible to restore this historic cemetery. 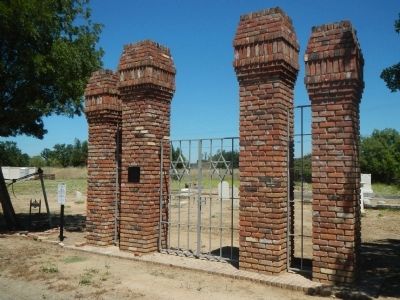 Our Thanks to Those Whose Good Works Made This Art Possible from The Commission for the Preservation of Pioneer Jewish Cemeteries & Landmarks in the West, Congregation Beth Shalom, The Marysville City Cemetery Commission, Grant Menghini – Stonemason. Yuba Roots and The People and City of Marysville.

Erected 2008 by Commission for the Preservation of Pioneer Jewish Cemeteries & Landmarks in the West.

Topics. This historical marker is listed in this topic list: Cemeteries & Burial Sites. A significant historical month for this entry is June 1856.