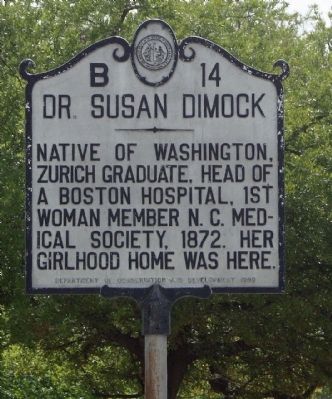 Erected 1939 by Department of Conservation and Development. (Marker Number B-14.)

Topics. This historical marker is listed in this topic list: Women.

Location. 35° 32.512′ N, 77° 3.267′ W. Marker is in Washington, North Carolina, in Beaufort County. Marker is on East Main Street near Market Street, on the left when traveling east. Touch for map. Marker is in this post office area: Washington NC 27889, United States of America. Touch for directions.

Other nearby markers. At least 8 other markers are within walking distance of this marker. John Gray Blount (within shouting distance of this marker); DeMille Family (about 300 feet away, measured in a direct line); Siege of Washington (about 500 feet away); Washington, North Carolina (about 600 feet away); Josephus Daniels (approx. 0.2 miles away); Daniel G. Fowle (approx. 0.2 miles away); USS Picket 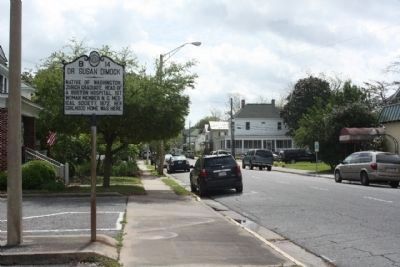 Regarding Dr. Susan Dimock.  Susan Dimock, a native of Washington, North Carolina, was the first female member of the North Carolina Medical Society. She was born in Beaufort County in 1847 and lived there through the beginning of the Civil War and the occupation by Union troops of Washington. Dimock moved to Boston after attending medical school in Europe, and became the resident physician at one of the earliest hospitals for women, the New England Hospital for Women and Children.

Dr. Dimock was the daughter of Henry and Mary Malvina Dimock. Henry Dimock, a native of Maine, was
the editor of the North State Whig. He married Mary Malvin, the daughter of the local sheriff, and they
purchased the Lafayette Hotel in Washington. Susan was raised in the hotel.

From a young age Dimock was associated with Solomon Samson Satchwell, who lived across the street. Dr. Satchwell was a very strong influence on Dimock, allowing her to attend to patients and make house calls with him, eventually inspiring Dimock to pursue the medical profession. 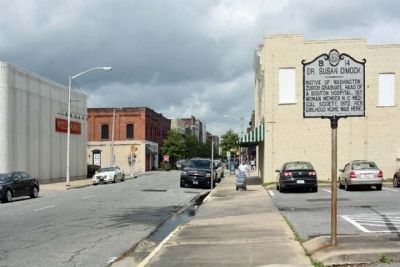 By Mike Stroud, April 19, 2013
3. Dr. Susan Dimock Marker, looking back, northwest along East Main Street
in the Lafayette Hotel when Union soldiers invaded Washington, and some of the troops stayed at the Lafayette with fellow New Englander Dimock. Henry Dimock died early in the war
though, at which time Susan and her mother moved to Sterling, Massachusetts, to live with Henry Dimock’s sister. Susan Dimock continued her education briefly in Sterling, having been taught previously by her mother and at a Washington girls school. At age seventeen she began teaching at an academy in Hopkinton. Susan Dimock also became close friends with Bessie Greene, whose father took a particular interest in Dimock’s professional aspirations.

Colonel Greene, a wealthy Bostonian, helped Susan Dimock begin studying medicine with one of the earliest female doctors practicing in America, Dr. Marie Zakrzewska, who in 1962 had founded the New England Hospital for Woman and Children. Dr. Zakrzewska, herself a Polish immigrant who was educated in Germany, encouraged Dimock, following continued denials of admittance to Harvard Medical School, to travel to Europe for schooling.

Dimock attended the University of Zurich with Greene funding her education, graduating in 1871 with
honors, and then studied briefly in Vienna and Paris before returning home. Dimock’s former mentor, Dr.
Satchwell, meanwhile submitted her credentials to the North Carolina Medical Society. Dr. Dimock 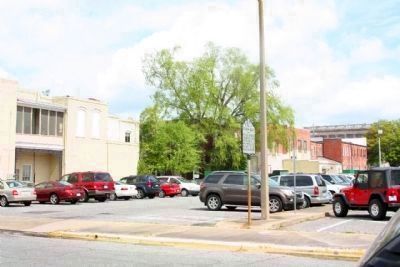 was
granted honorary admission to the Medical Society, to be given full admission after of her schooling could be verified.

Dr. Dimock returned to Boston after graduation, and was installed as resident physician at New England Hospital. She was the resident physician at the hospital from 1872 until 1875, at which time she took leave to travel and study further in Europe. In May 1875, her ship wrecked off the coast of England, killing everyone on board, including Susan Dimock and her friend Bessie Greene. Colonel Greene brought their bodies back to the United States, and Dr. Dimock was buried in the Forest Hills Cemetery in Boston. (North Carolina Office of Archives & History — Department of Cultural Resources)
Credits. This page was last revised on May 7, 2018. It was originally submitted on June 21, 2013, by Mike Stroud of Bluffton, South Carolina. This page has been viewed 440 times since then and 21 times this year. Photos:   1, 2, 3, 4. submitted on June 21, 2013, by Mike Stroud of Bluffton, South Carolina.
Share This Page.