The Race for Spotsylvania Court House

The Battle of Spotsylvania Court House 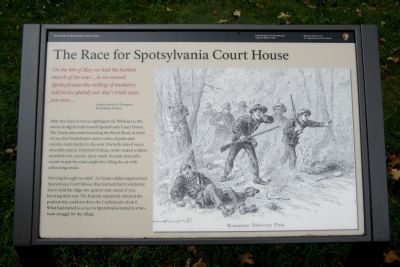 On the 8th of May we had the hardest march of the war….as we neared Spottsylvania the rattling of musketry told us too plainly our day’s trials were not over….
Sergeant James M. Thompson
6th Alabama Infantry

After two days of vicious fighting in the Wilderness, the armies trudged south toward Spotsylvania Court House. The Union army marched along the Brock Road, in front of you; the Confederates used a series of paths and country roads farther to the west. For both sides it was a miserable march. Deprived of sleep, sweat-soaked soldiers stumbled over narrow, dusty roads. In many places the woods beside the road caught fire, filling the air with suffocating smoke.

Morning brought no relief. As Union soldiers approached Spotsylvania Court House, they learned that Confederate forces held the ridge one-quarter mile ahead of you, blocking their way. The Federals repeatedly attacked the position but could not drive the Confederates from it. What had started as a race to Spotsylvania ended in a two-week struggle for the village. 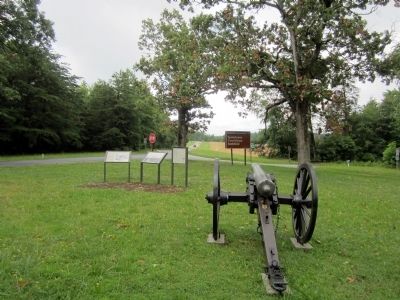 Click or scan to see
this page online
Department of the Interior.