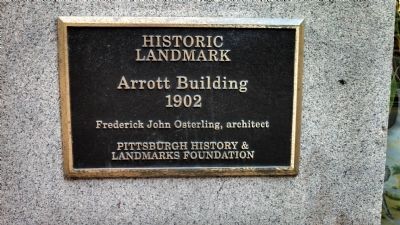 Location. 40° 26.365′ N, 80° 0.079′ W. Marker is in Pittsburgh, Pennsylvania, in Allegheny County. Marker is at the intersection of Wood Street and Fourth Avenue, on the right when traveling west on Wood Street. Touch for map. Marker is in this post office area: Pittsburgh PA 15222, United States of America. Touch for directions. 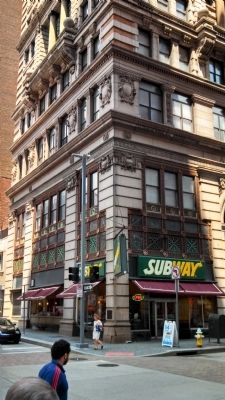 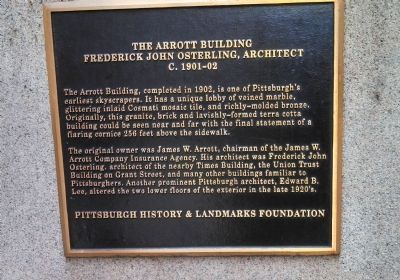 By Mike Wintermantel, July 31, 2013
3. Arrott Building Description plaque
The Arrott Building
Frederick John Osterling, Architect
C. 1901-02
The Arrott Building, completed in 1902, is one of Pittsburgh's earliest skyscrapers. It has a unique lobby of veined marble, glittering inlaid Cosmati tile, and richly-molded bronze. Originally, this granite, brick and lavishly-formed terra cotta building could be seen near and far with the final statement of a flaring cornice 256 feet above the sidewalk.
The original owner was James W. Arrott, chairman of the James W. Arrott Company Insurance Agency. His architect was Frederick John Osterling, architect of the nearby Times Building, the Union Trust Building on Grant Street, and many other building familiar to Pittsburghers. Another prominent Pittsburgh architect, Edward B. Lee, altered the two lower floors of the exterior in the late 1920's.
Credits. This page was last revised on June 16, 2016. It was originally submitted on July 31, 2013, by Mike Wintermantel of Pittsburgh, Pennsylvania. This page has been viewed 480 times since then and 8 times this year. Photos:   1, 2, 3. submitted on July 31, 2013, by Mike Wintermantel of Pittsburgh, Pennsylvania.
Share This Page.