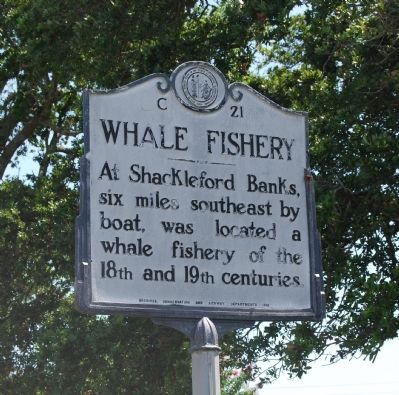 Photographed By Mike Wintermantel, August 10, 2013
1. Whale Fishery Marker
Inscription.
Whale Fishery. . At Shackleford Banks, six miles southeast by boat, was located a whale fishery of the 18th and 19th centuries. . This historical marker was erected in 1948 by North Carolina Archives, Conservation and Highway Departments. It is in Beaufort in Carteret County North Carolina

At Shackleford Banks, six miles southeast by boat, was located a whale fishery of the 18th and 19th centuries.

Topics and series. This historical marker is listed in these topic lists: Industry & Commerce • Waterways & Vessels. In addition, it is included in the North Carolina Division of Archives and History series list.

Other nearby markers. At least 8 other markers are within walking distance of this marker. Salt Works (here, next to this marker); Spanish Attack (a few steps from this marker); Old Burying Ground (about 700 feet away, measured in a direct line); Beaufort (approx. 0.2 miles away); Jacob Henry (approx. ¼ mile away); Dividing Line Between Old & New Town 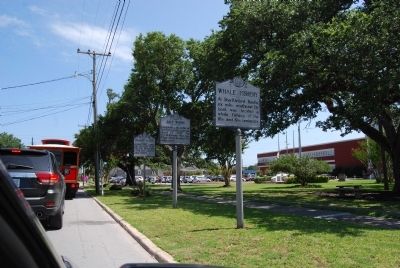