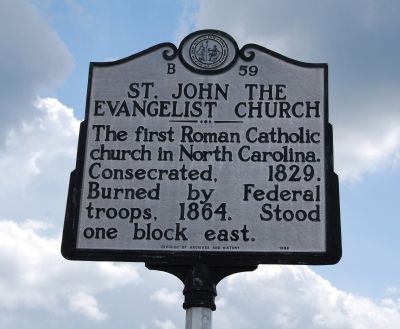 Erected 1996 by North Carolina Division of Archives and History. (Marker Number B-59.)

Topics and series. This historical marker is listed in these topic lists: Churches & Religion • War, US Civil. In addition, it is included in the North Carolina Division of Archives and History series list. A significant historical year for this entry is 1829. 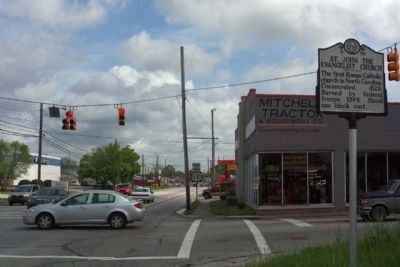 Regarding St. John the Evangelist Church.
Roman Catholic worship in Washington, North Carolina, had its beginnings in 1807 when Father Michael Lacy visited the homes of Walter Hanrahan and Lewis Leroy. In the 1820s John England, newly appointed bishop of the Diocese of Charleston, visited regularly. In 1823 Leroy contributed land in the southeast corner of the intersection of Third and Van Norden Streets for a church building. Construction was slow but services were held in the church by 1828. This, according to Stephen Worsley who conducted a study of Catholic activity in antebellum North Carolina, was the first Catholic church in the state.

Bishop England, who had organized the parish in 1821, consecrated St. John the Evangelist Church, on March 25, 1829, only days after dedicating St. Patrick Church in Fayetteville. The building served the local Catholic population until April 1864, when it was burned, along with much of Washington, 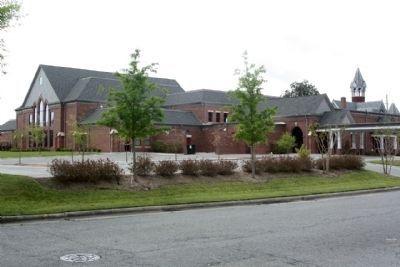 Photographed By Mike Stroud, April 19, 2013
3. St. John the Evangelist Church
by evacuating Union troops. The fire also caused much damage to grave markers in the Catholic cemetery. For over sixty years thereafter the town had no Catholic church and worship was held in private homes. The original site today is the site of the First Methodist Church of Washington.

In 1925 the Passionist Fathers, a Catholic order, established Mother of Mercy parish to serve as a mission church and school for blacks. A private home was purchased to serve as a convent for the sisters and a small chapel opened. The local white Catholics soon began attending mass in the chapel, but finding the need for more space, built St. Agnes Chapel in 1929. In 1963 the two Catholic parishes and separate black and white parochial schools were combined as Mother of Mercy parish. The Passionist Fathers withdrew and the parish became the responsibility of the Diocese of North Carolina. The school closed in 1973 following financial problems. Mother of Mercy Church today consists of about three hundred families.
Credits. This page was last revised on June 16, 2016. It was originally submitted on August 12, 2013, by Mike Wintermantel of Pittsburgh, Pennsylvania. This page has been viewed 529 times since then and 62 times this year. Photos:   1. submitted on August 12, 2013, by Mike Wintermantel of Pittsburgh, Pennsylvania.   2, 3. submitted on August 12, 2013, by Mike Stroud of Bluffton, South Carolina.
Share this page.