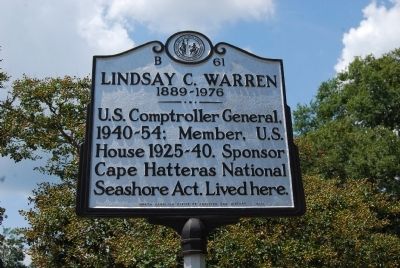 Erected 2003 by North Carolina Office of Archives and History. (Marker Number B-61.)

Location. 35° 32.732′ N, 77° 3.751′ W. Marker is in Washington, North Carolina, in Beaufort County. Marker is on West Main Street 0.1 miles west of Pierce Street, on the left when traveling east. Touch for map. Marker is in this post office area: Washington NC 27889, United States of America. Touch for directions.

Regarding Lindsay C. Warren. Named as one of the 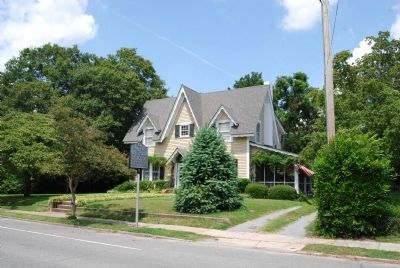 By Mike Wintermantel, August 10, 2013
2. Lindsay C. Warren Marker
nation’s ten ablest Congressmen by Life magazine in 1939, Lindsay Carter Warren left that post the following year to serve for 14 years as Comptroller General. Born in Washington, North Carolina, Warren studied at the Bingham School and at the University of North Carolina where he attended law school in 1911-12. His public service career began with election to the state senate in 1917. Reelected in 1919, he served as President Pro Tem. After a term in the State House, he was elected to the U.S. House in 1924. So successful was he in that position that he ran unopposed for eight terms. During his tenure he was chief sponsor for the Merchant Marine Act, Cape Hatteras National Seashore Act, Wright Brothers Memorial, Executive Reorganization Act of 1939, and Congressional Reappointment Act of 1940. He served as chairman of the House Accounts Committee. In 1940 Warren resigned to accept President Franklin Roosevelt’s appointment as Comptroller General, head of the General Accounting Office (GAO).

As the official watchdog of federal expenditures, Lindsay Warren is credited with returning well over $900 million to the government during his term. He managed the GAO in World War II, during which war contractors sought to take advantage of government agencies. So unflappable was Warren in this post that in 1949 he out-maneuvered Herbert Hoover, who attempted to make the Comptroller General more accountable to the executive branch. Sam Rayburn recognized Warren in 1953 for his “fine sense of justice and his fine judgment.”

Due to health concerns, Warren retired from the GAO in 1954, but not before reorganizing the office and redirecting its procedures to make it an effective bureaucracy. By 1959 Warren’s health had recovered enough for him to return to the state senate and subsequently he was touted as “the most powerful man in the 1961 legislature.” In 1962 he attended the dedication of the Lindsay Warren Bridge over the Alligator River, connecting the mainland to the Outer Banks. Failing health in 1966 kept him from the dedication of the Lindsay Warren Visitor Center at Fort Raleigh National Historic Site. He died in 1976 and is buried in Oakdale Cemetery in Washington, near his family home overlooking the Pamlico River.
(North Carolina Office of Archives & History — Department of Cultural Resources)