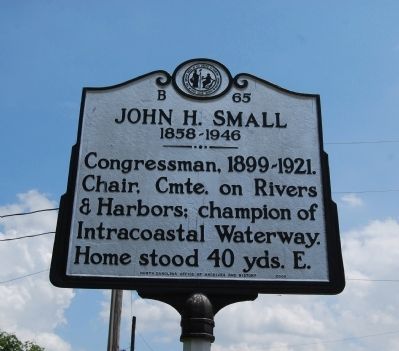 Erected 2008 by North Carolina Office of Archives and History. (Marker Number B-65.)

Topics and series. This historical marker is listed in this topic list: Waterways & Vessels. In addition, it is included in the North Carolina Division of Archives and History series list. 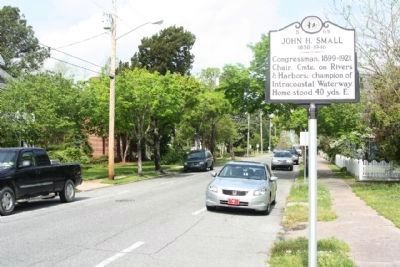 Regarding John H. Small. Washington, North Carolina, native John Humphrey Small served eleven terms in the U.S. House of Representatives, leaving his greatest legacy as an advocate, along with U.S. Sen. Furnifold Simmons of New Bern, for construction of the Intracoastal Waterway. Educated at Trinity College, Small left school to become a teacher and in 1881 took up the practice of law in his hometown. He held several local offices, including city councilman and mayor, before being elected in 1898 to represent the First Congressional District. There he remained through eleven terms, until 1921.

Sketches of the life of Small record that he long “dreamed” of a national transportation system by water, not surprising for someone raised alongside the Pamlico River. Early in his Congressional tenure, he sought and received an appointment to the Committee on Rivers and Harbors, a panel he chaired in during the 65th Congress, 1917-1919. Authorized 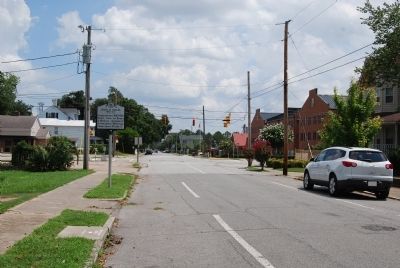 Photographed By Mike Wintermantel, August 10, 2013
3. John H. Small Marker
by Congress in 1919, the Intracoastal Waterway was completed from Norfolk to Wilmington by 1936. Political opponents derided the project as “Small’s Big Ditch.” The Congressman from an early age also took an interest in promoting education. Small declined to run for reelection in 1920 and returned to the practice of law, until 1931. He died in 1946 and is buried in the city’s Oakdale Cemetery. The house where he lived in Washington, prominently located at the junction of Bridge and Main streets, was demolished in 1954, the year after the death of Small’s widow Isabel. In recent years a vacant commercial building occupied the site. (North Carolina Office of Archives & History — Department of Cultural Resources)