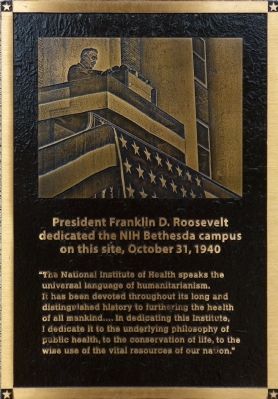 By Allen C. Browne, August 14, 2013
1. President Franklin D. Roosevelt Marker
Inscription.
President Franklin D. Roosevelt dedicated the NIH Bethesda campus on this site, October 31, 1940. . "The National Institute of Health speaks the universal language of humanitarianism. It has been devoted throughout its long and distinguished history to furthering the health of all mankind....In dedicating this Institute, I dedicate it to the underlying philosophy of public health, to the conservation of life, to the wise use of the vital resources of our nation." . This historical marker is in Bethesda in Montgomery County Maryland

"The National Institute of Health speaks the universal language of humanitarianism. It has been devoted throughout its long and distinguished history to furthering the health of all mankind....In dedicating this Institute, I dedicate it to the underlying philosophy of public health, to the conservation of life, to the wise use of the vital resources of our nation."

Location. 38° 59.947′ N, 77° 6.084′ W. Marker is in Bethesda, Maryland, in Montgomery County. Marker is on Center Drive 0.1 miles south of South Drive, on the right when traveling south. Marker is on a pilaster to the right of the front door of Building 1, the James A. Shannon Building on the NIH campus. Touch for map. Marker is at or near this postal address: 100 South Drive, Bethesda MD 20814, United States of America. Touch for directions.

Other nearby markers. At least 8 other markers are within walking distance of this marker. The Louis Stokes Laboratories (about 300 feet away, measured in a direct line); The Centennial Anchor (about 600 feet away); Tree of Hippocrates (approx. 0.3 miles away); Raven and the Sun 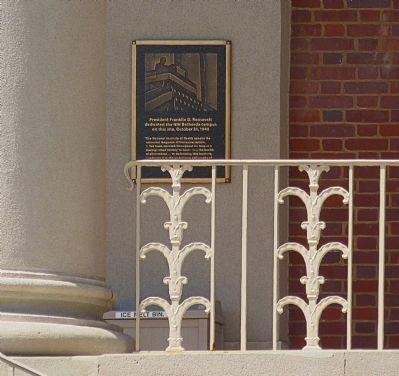 Additional comments.
1. The Dedication
Lyons in her 2006 book Acres of Science describes the dedication of the Bethesda campus this way:

[O]n October 31, 1940, Roosevelt stood between the white columns on the front porch Building 1 to dedicate the campus. An estimated 3,000 public and private doctors, Public Health Service (PHS) employees, and Montgomery County residents attended the ceremony on the warm afternoon. Roosevelt’s brief speech made three points. First, with the United States closely watching the war in Europe, Roosevelt stressed that total defense meant not only guns and airplanes, but mobilization of health and medical resources. He stated that the NIH had been devoted to “furthering the health of all mankind.” 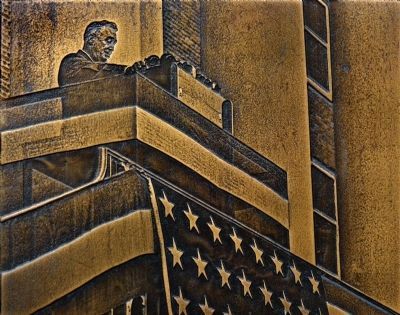 By Allen C. Browne, August 14, 2013
3. President Franklin D. Roosevelt
Close-up of bas relief on marker
Its new mission, he declared, must be to “recruit not only men and materials but also knowledge and science in the service of national strength.”

Second, Roosevelt emphasized that “neither the American people nor their government intend to socialize medical practice any more than they plan to socialize industry.” This was Roosevelt’s strongest statement up until that time trying to calm the organized medical profession. Some feared that Roosevelt would establish a national health care system administered by the federal government. The American Medical Association strongly opposed any such plan. “No one has a greater appreciation than I of the skill and self-sacrifice of the medical profession. And there can be no substitute for the personal relationship between doctor and patient which is characteristic and a source of strength of medical practice in our land,” Roosevelt assured his audience.

And third, Roosevelt lauded the Public Health Service, saying, “it is only recently in the past few years that the Federal Government has indicated that it can do infinitely more–that disease disregards state lines as well as national–that among the States there is inequality of opportunity for health–that in such cases the Public Health Service is helping, and must continue to help, man greatly.” Roosevelt 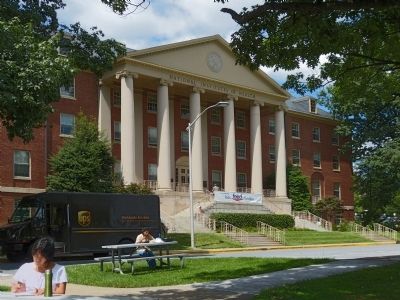 By Allen C. Browne, August 14, 2013
4. Building 1, The James A. Shannon Building
highlighted the establishment of the National Cancer Institute and warned that better transportation around the world meant more exposure to all kinds of disease.

At the end of his speech, Roosevelt turned to Helen Wilson and thanked her family for the donation of their land for the NIH. He told her, “I voice for America, and for the stricken world, our hopes, our prayers, our faith, in the power of man’s humanity to man.”
— Submitted August 16, 2013, by Allen C. Browne of Silver Spring, Maryland. 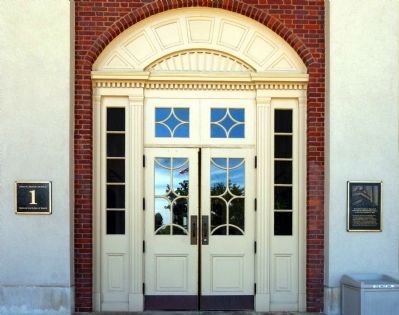 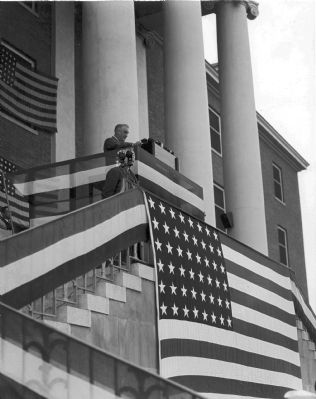 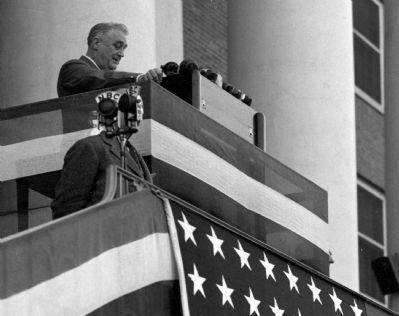 By NIH Almanac
7. President Franklin D. Roosevelt October 31, 1940
Detail as used in on the marker 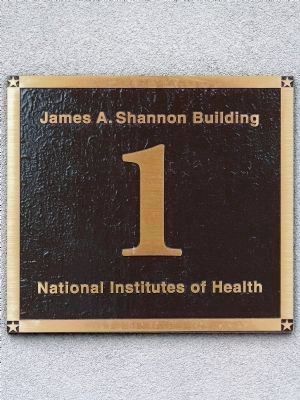 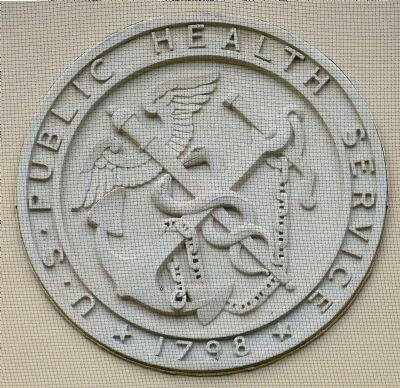 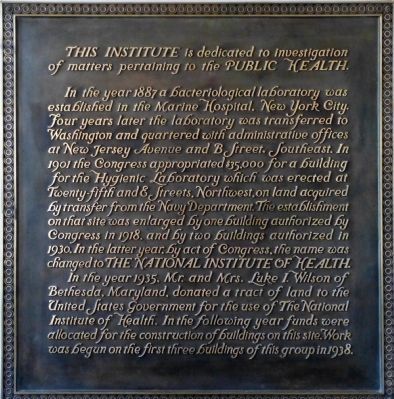 By Allen C. Browne, August 15, 2013
10. Plaque in the front foyer on Building 1
This Institute is dedicated to the investigation of matters pertaining to the Public Health.

In the year 1887 a bacteriological laboratory was established in the Marine Hospital. New York City. Four years later the laboratory was transferred to Washington and quartered with administrative offices at New Jersey Avenue and B Street, Southeast. In 1901 the Congress appropriated $35,000 for a building for the Hygienic Laboratory which was erected as Twenty-fifth and E Streets, Northwest, on land acquired by transfer from the Navy Department. The establishment on that site was enlarged by on building authorized by Congress in 1918, and two buildings authorized in 1930. In the latter year, by act of Congress, the name was changed to The National Institute of Health.

In the year 1935,Mr. and Mrs. Luke I. Wilson of Bethesda, Maryland. donated a tract of land to the United States Government for the use of the National Institute of Health. In the following year funds were allocated for the construction of buildings on this site. Work was begun on the first three buildings of this group in 1938. 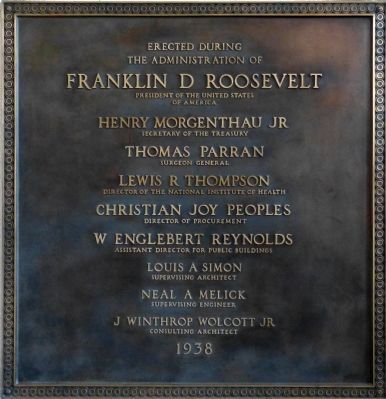 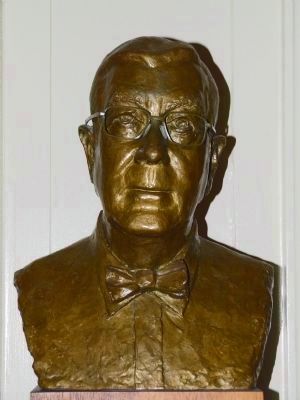 James Shannon is remembered as the NIH director under whom there was a rapid expansion in federally funded biomedical research. In 1983, Building 1 itself was renamed in Shannon's honor.
Bust inside Building 1 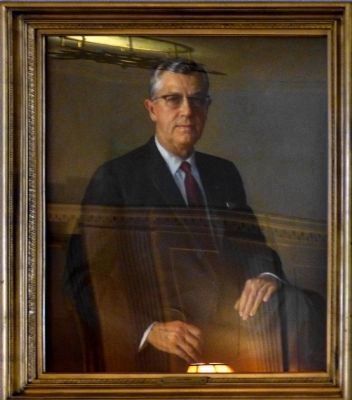 Widely recognized for his original research in kidney function, James Shannon led a project during World War II to develop antimalarial drugs at Goldwater Memorial Hospital in New York City. In 1949 he came to NIH as the first intramural director of the National Heart Institute, bringing many future NIH scientific leaders with him. During his NIH directorship, Shannon presided over rapid expansion of the NIH often remembered as "the Golden Years." In 1983, Building 1 was named the James A. Shannon Building to commemorate his many contributions to NIH.
Portrait inside Building 1 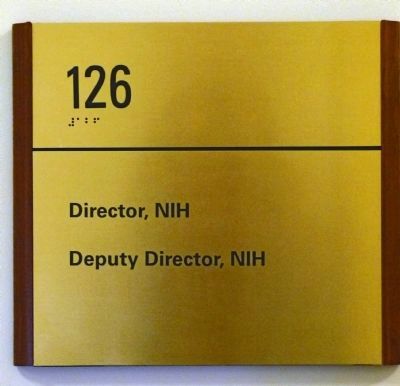 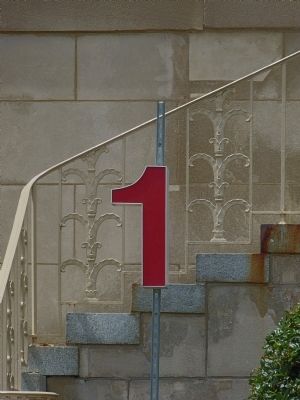