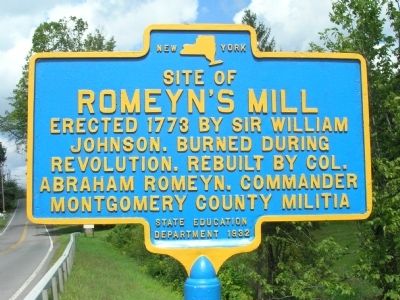 Topics. This historical marker is listed in these topic lists: Colonial Era • Industry & Commerce • War, US Revolutionary. A significant historical year for this entry is 1773.

Location. 43° 5.85′ N, 74° 15.407′ W. Marker is in Mayfield, New York, in Fulton County. Marker is on School Street, on the right when traveling north. The Romeyn's Mill Marker is at the north end of the bridge that spans the spill way that seperates Mayfield Little Lake Outlet and the Great Sacandaga Reservoir. Marker also overlooks the nearby Mayfield Marina. Touch for map. Marker is in this post office area: Mayfield NY 12117, United States of America. Touch for directions.

Other nearby markers. At least 8 other markers are within 2 miles of this marker, measured as the crow flies. Dutch Reformed Church of Mayfield (approx. half a mile away); Anthonyville (approx. one mile away); Burying Ground (approx. 1.1 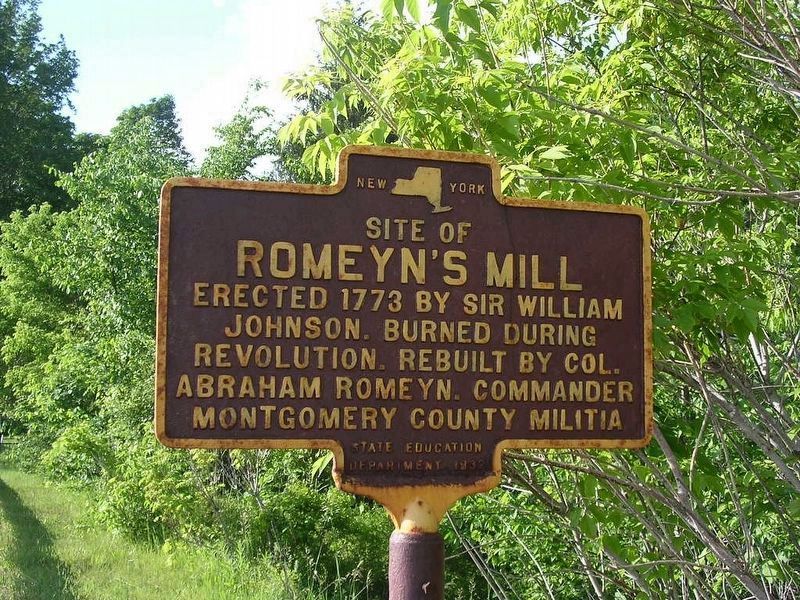 Regarding Romeyn's Mill. "The site of the first grist or flour mill in the town is that now occupied by the grist and saw-mill of Edward A. Elphie on Mayfield creek at Shawville. It was erected under the direction of Sir William Johnson in 1773, but was burned during the revolution. The mill was confiscated with other tory property, and at the close of the war was sold to a son of Rev. Mr. Romeyn, who rebuilt it and carried on business there for a number of years. It was known at that time as Romeyn's Mills, and the creek upon which it was located was called Romeyn creek, but in 1795 the property came into the possession of a man named Bogert, who conducted it for a few years and then sold to William A. Wells. He operated it for a time and then sold it to Robert Zule. The mill passed from his hands into the possession of Horace Stanley, 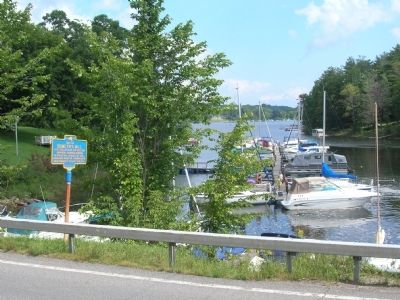 By Howard C. Ohlhous, August 30, 2009
3. Romeyn's Mill Marker
The Mayfield Marina and the Great Sacandaga Reservoir can be seen beyond the marker.
during whose ownership it was rebuilt. About forty-five years ago it was purchased by Sidney Chase, and from him the property came into the possession of Mr. Elphie, its present owner. The mill has an excellent water power and is fully equipped with modern machinery." - HISTORY of MAYFIELD, N.Y. FROM HISTORY OF FULTON COUNTY REVISED AND EDITED BY: WASHINGTON FROTHINGHAM PUBLISHED BY D. MASON & CO. PUBLISHERS, SYRACUSE, NY 1892 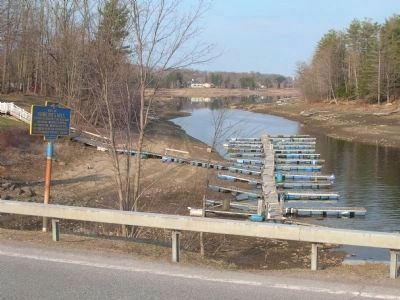 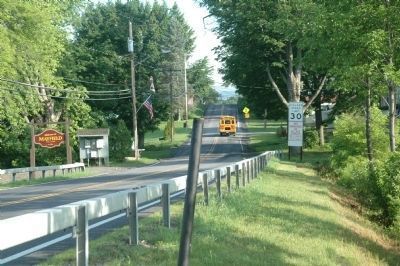