"As long as I have any choice in the matter, I shall live only in a country where civil liberty, tolerance, and equality of all citizens before the law prevail," Albert Einstein.

Albert Einstein, probably best known for his theory of relativity, revolutionized scientific thought with new concepts of space, time, mass, motion, and gravitation. His statement that energy and matter are interchangeable was the key to the development of atomic energy.

Born in Ulm, Germany, in 1879, Einstein grew up in Munich. Unable to find a teaching job after graduating from a technical institute in Zurich, Switzerland, he accepted a post as examiner in the Swiss patent office. He worked there from 1902 in 1909, devoting only his spare time to his own scientific interests.

The year 1905 was a turning point in Einstein's life. He received a doctorate in physics 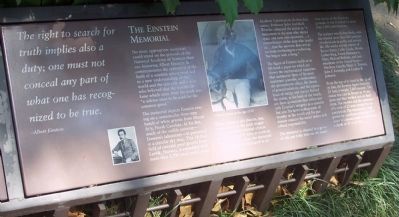 Click or scan to see
this page online
from the University of Zurich and published three scientific papers, each of which became the basis for a new branch of physics.

The first paper described light as a stream of energy particles called "quanta." It explained the already observed photo-electric effect--that beams of light cause metals to release electrons that can be converted into electric current. It was for this work that, in 1921, Albert Einstein received the Nobel Prize in physics.

The second paper, on the electrodynamics of moving bodies, contained Einstein's special theory of relativity. The famous equation E=mc2 related mass directly to energy. (A manuscript copy of the paper is housed in the Library of Congress in Washington, D.C.) The third paper explained Brownian motion--the irregular movement of particles suspended in a liquid or a gas--and showed that such motion is the consequence of fundamental nature of matter.

These papers earned for Einstein a series of professorships in Switzerland and Prague. Then, in 1914, he moved to Berlin as a member of the Prussian Academy of Sciences and director of the Kaiser Wihelm Physical Institute. He was free to teach at the University 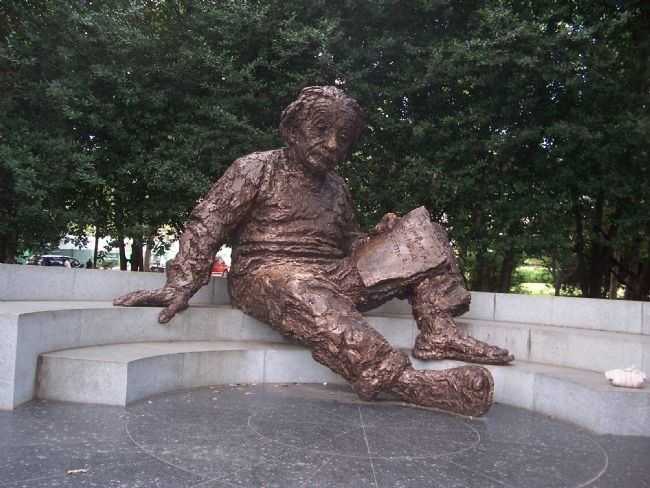 Photographed By Richard E. Miller, circa July 2005
3. Albert Einstein Memorial
of Berlin. Despite anti-Semitism which grew steadily after World War I, Einstein held these positions until Hitler came into power.

In 1933, Einstein came to the United States and joined the newly formed Institute for Advanced Studies at Princeton, New Jersey. He became a citizen of the United States in 1940, was elected to membership in the National Academy of Sciences in 1942, and remained affiliated with the Institute at Princeton until his death in 1955.

In his later years, Einstein worked actively on behalf of world government and world peace. But he kept his allegiance to science. In a discussion of his political activities, he once said, "... politics is for the present, but an equation ... is ... for eternity."

[Photo caption]: Albert Einstein at the age of 53.

"The right to search for truth implies also a duty; one must not conceal any part of what one has recognized to be true," Albert Einstein.

No more appropriate memorial could stand on the grounds of the National Academy of Sciences than one honoring Albert Einstein. It commemorates the centennial of the 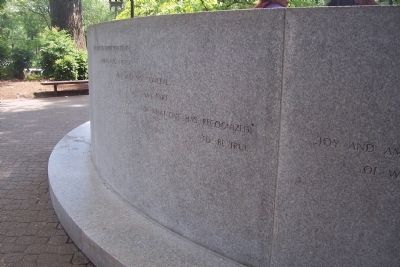 Photographed By Richard E. Miller, June 08
4. Albert Einstein - The Einstein Memorial Marker
birth of a scientist whose work led to a new understanding of this world and the universe and a man who believed that the worldwide fame which came from his work was "a solemn trust to be used for the common good."

The memorial depicts Einstein resting on a semicircular three-step bench of white granite from Mount Airy, North Carolina. At his feet, much of the visible universe--Einstein's laboratory--is portrayed in a circular sky map. This 28-foot field of emerald pearl granite from Larvik, Norway, is embedded with more than 2,700 small metal studs.

These represent the planets, sun, moon, stars (to the sixth magnitude), and other celestial objects positioned as they were at noon on April 22, 1979, when the memorial was unveiled and dedicated at an Academy Convocation. At that dedication, Professor John Archibald Wheeler eulogized the status as "a monument to the man who united space and time into spacetime...a remembrance of the man who taught us...that the universe does not go on from everlasting to everlasting, but begins with a bang." 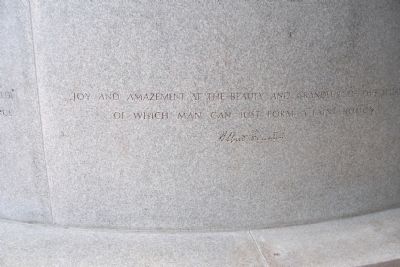 Photographed By Richard E. Miller, June 08
5. Albert Einstein - The Einstein Memorial Marker
three of his most important scientific contributions: the photoelectric effect, the theory of general relativity, and the equivalence of energy and matter. Behind the status, at the back of the bench, are three quotations that reflect not only Einstein's integrity as a scientist but also his never-ending sense of wonder at the world and his passionate concern for social justice and ethical responsibility.

The memorial is situated in a grove of elm and holly trees on the southwest corner of the Academy grounds. It was financed by more than 5,000 contributions.

The sculptor was Robert Berks, who has created more than 300 portraits of individuals in public and private life. His works include statues of Enrico Fermi, Pablo Casals, Martin Luther King, Ernest Hemingway, Mary McLeod Bethune, and four presidents of the United States--Abraham Lincoln, Harry S. Truman, John F. Kennedy, and Lyndon B. Johnson.

From the top of its head to the tip of its feet, the Einstein figure measures 21 feet; it weighs 7,000 pounds. The statue was cast in bronze in 19 sections and then welded into its final form. Ten months and the assistance of a crew of 25 were needed for 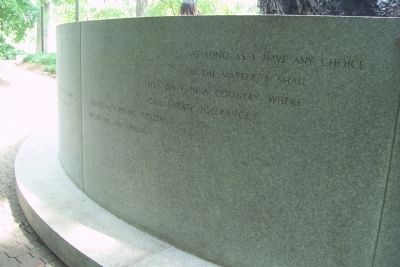 Photographed By Richard E. Miller, June 08
6. Albert Einstein - The Einstein Memorial Marker
its completion. The monument is supported by a subbase consisting of 3 concrete caissons sunk to bedrock at a depth of 23 to 25 feet.

[Photo caption]: Albert Einstein at the age of 60.

[Einstein's quotations inscribed on the back of the Memorial statue's bench:] "As long as I have any choice in the matter, I shall live only in a country where civil liberty, tolerance, and equality of all citizens before the law prevail."

"Joy and amazement of the beauty and grandeur of this world of which man can just form a faint notion."

"The right to search for truth implies also a duty; one must not conceal any part of what one has recognized to be true."

Erected 1979 by National Academy of Sciences.

Topics. This historical marker and memorial is listed in these topic lists: Education • Science & Medicine. A significant historical date for this entry is March 14, 1886. 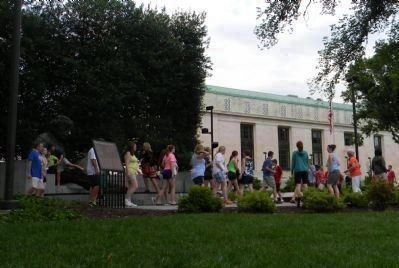 Photographed By Richard E. Miller, June 9, 2013
7. Albert Einstein - The Einstein Memorial - in the shadows of the grove to the far left
with the National Academy of Sciences building behind the throng of tourists, middle right.
, on the right when traveling west. The Einstein Memorial and the marker panels are across the street from the National Mall, on the grounds of the National Academy of Sciences (southwestern corner), in a wooded area accessible to pedestrians from Constitution Avenue Northwest. Touch for map. Marker is at or near this postal address: 2101 Constitution Avenue Northwest, Washington DC 20418, United States of America. Touch for directions.

Other nearby markers. At least 8 other markers are within walking distance of this marker. The Celestial Map (here, next to this marker); National Academy of Sciences (a few steps from this marker); a different marker also named National Academy of Sciences (within shouting distance of this marker); Pharmacists' War Memorial (about 400 feet away, measured in a direct line); Vietnam Veterans Memorial (about 700 feet away); A Legacy of Healing and Hope (about 800 feet away); Braddock’s Rock (approx. 0.2 miles away); Department of State (approx. 0.2 miles away). Touch for a list and map of all markers in Foggy Bottom.