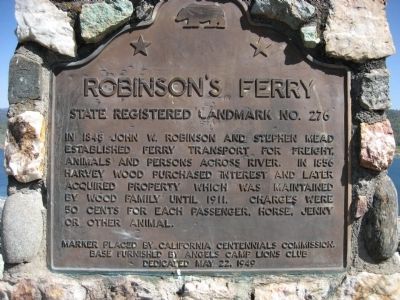 By Richard Wisehart, March 21, 2008
1. Robinson's Ferry Marker
Inscription.
Robinson's Ferry. . In 1848 John W. Robinson and Stephen Mead established ferry transport for freight, animals and persons across river. In 1856 Harvey Wood purchased interest and later acquired property which was maintained by Wood family until 1911. Charges were 50 cents for each passenger, horse, jenny or other animal. . This historical marker was erected in 1949 by California Centennial Commission with base furnished by Angels Camp Lions Club.. It is Near Angels Camp in Calaveras County California

In 1848 John W. Robinson and Stephen Mead established ferry transport for freight, animals and persons across river. In 1856 Harvey Wood purchased interest and later acquired property which was maintained by Wood family until 1911. Charges were 50 cents for each passenger, horse, jenny or other animal.

Topics and series. This historical marker is listed in these topic lists: Notable Places • Waterways & Vessels. In addition, it is included in the California Historical Landmarks series list.

Location. 38° 0.545′ N, 120° 30.285′ W. Marker is near Angels Camp, California, in Calaveras County. Marker is on State Highway 49, on the left when traveling south. Marker is 5.6 miles south of Angels Camp and 0.3 miles north of New Melones Reservoir. Touch for map. Marker is in this post office area: Angels Camp CA 95222, United States of America. Touch for directions.

Other nearby markers. At least 8 other markers are within 3 miles of this marker, measured as the crow flies. Archie D. Stevenot (here, next to this marker); The Story Under the Lake 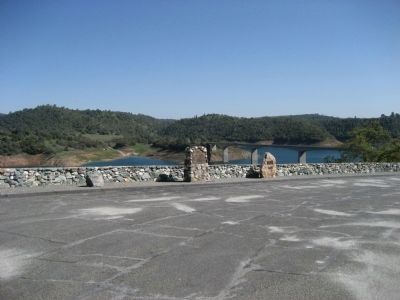 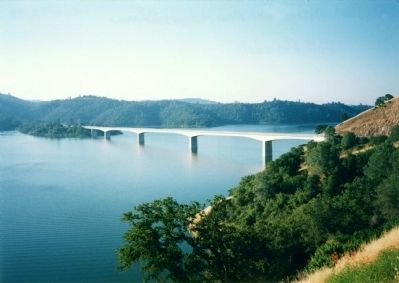 By Richard Wisehart, March 9, 2002
3. New Melones Reservoir
View is southerly. The Stevenot - Stanislaus River Bridge, seen in this photo, is in the approximate location of where John Robinson and Stephen Mead operated their ferry. The Robinson's Ferry monument is just off the right edge of photo. 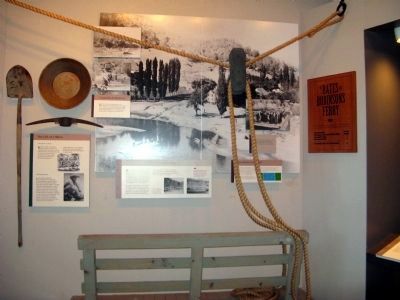 June 13, 2010
4. Information on Display at the New Malones Reservoir Visitor Center
Crossing the River on Robinsons Ferry
During the height of the gold rush, a constant stream of mule trains, freight wagons, stagecoaches, and pack-laden miners paraded through the Sierra foothills. All these travelers depended on ferries to cross the Sierra rivers. For someone looking to capitalize on the rush of miners, one of the best strategies was to find a calm portion of the river with easy access to the surrounding hills, and set up a ferry service. In August 1849, John W. Robinson and Stephan Mead began operating Robinson’s Ferry at the foot of Carson Hill on the Stanislaus River. This was one of the best sites on the Stanislaus, with plenty of flat surrounding land and relatively calm waters (although floods carried the ferry off more times than once). The service survived until 1914, keeping the town of Robinsons Ferry alive in the years between the first gold rush and the second gold boom at the turn of the century.
Credits. This page was last revised on June 16, 2016. It was originally submitted on April 2, 2008, by Richard Wisehart of Sonora, California. This page has been viewed 2,423 times since then and 52 times this year. Photos:   1, 2, 3. submitted on April 2, 2008, by Richard Wisehart of Sonora, California.   4. submitted on June 18, 2010. • Kevin W. was the editor who published this page.
Share This Page.