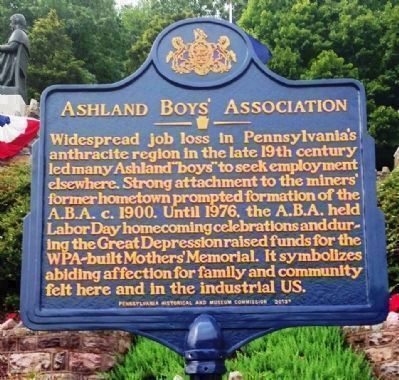 1. Ashland Boys' Association Historical Marker
Inscription.
Ashland Boys’ Association. . Widespread job loss in Pennsylvania’s anthracite region in the late 19th century led many Ashland “boys” to seek employment elsewhere. Strong attachment to the miners’ former hometown prompted formation of the A.B.A. c. 1900. Until 1976, the A.B.A. held Labor Day homecoming celebrations and during the Great Depression raised funds for the WPA-built Mothers’ Memorial. It symbolizes abiding affection for family and community felt here and in the industrial US . This historical marker was erected in 2013 by Pennsylvania Historical and Museum Commission. It is in Ashland in Schuylkill County Pennsylvania

Widespread job loss in Pennsylvania’s anthracite region in the late 19th century led many Ashland “boys” to seek employment elsewhere. Strong attachment to the miners’ former hometown prompted formation of the A.B.A. c. 1900. Until 1976, the A.B.A. held Labor Day homecoming celebrations and during the Great Depression raised funds for the WPA-built Mothers’ Memorial. It symbolizes abiding affection for family and community felt here and in the industrial US

Topics and series. This historical marker is listed in these topic lists: Fraternal or Sororal Organizations • Industry & Commerce. In addition, it is included in the Pennsylvania Historical and Museum Commission series list. A significant historical year for this entry is 1900.

Other nearby markers. At least 8 other markers are within 8 miles of this marker, measured as the crow flies. Whistler Mother Painting in Bronze (a few 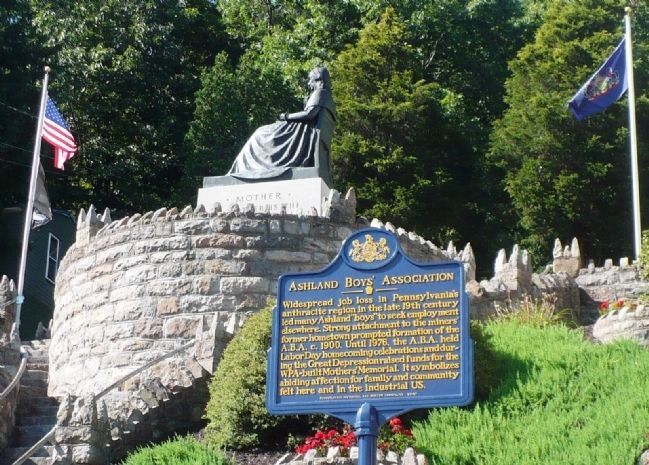 More about this marker. Ashland Area Historic Preservation Society is around the corner located at 318 Centre Street. The Pioneer Tunnel Coal Mine and Steam Train, and the Museum of Anthracite Mining is a mile away.

Also see . . .  MarkerQuest - Ashland Boys' Association. Information about the A.B.A. and the construction of their Mothers' Memorial. (Submitted on October 7, 2021, by Laura Klotz of Northampton, Pennsylvania.) 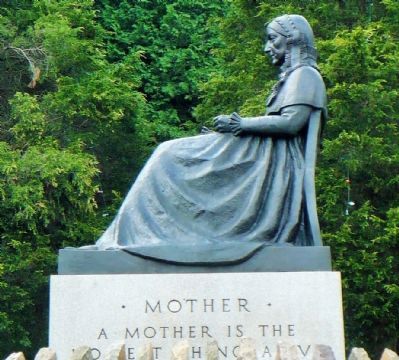 Many of these men lost their jobs, and left behind their cultural identity, and the roots of their anthracite heritage. This prompted the formation of a unique homecoming organization, the Ashland Boys Association, circa 1900. Their membership was made up of Ashland men and boys,regardless of their color, creed, nationality, or position in life. Ashland men decided they wanted to come back to reminisce and share their childhood memories. They wanted to keep nostalgia for their old hometown, and stay in touch with their old coal mining friends and family. The A.B.A. was an archetype of a poignant Pennsylvania story—successive waves of industrialization and economic development created and then destroyed industries and communities.

Large groups of people were left longing for past associations, and the comforts of mother, friends, and home. The pattern effected anthracite then bituminous miners, garment workers, and steel and electrical workers to name a few. Ashland, however, was the only Pennsylvania town to respond in this unique way. Ashland established a homecoming celebration as an annual event every Labor Day. The “sentimental impact” of this event was felt throughout the state and nation.

While many Ashland residents moved to the Philadelphia 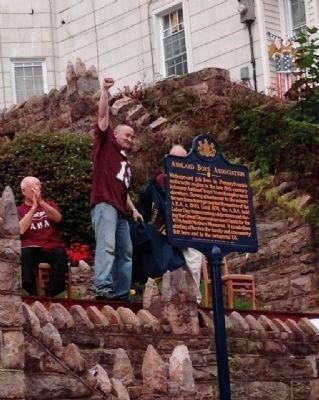 4. Ashland Boys' Association Historical Marker Unveiling
On August 31, 2013, during the 75th Anniversary celebration of the A.B.A. Mothers' Memorial, a celebration parade and dedication was held to unveil the Ashland Boys' Association State Historical Marker. The historical marker was unveiled by Adam J. Bernodin, III, Jim Klock, and Dr. William Lewis, Jr., official from the Pennsylvania Historical and Museum Commission. The historical marker dedication also included an address by 2013 Miss Pennsylvania Annie Rosellini.
area because of easy access to railroad transportation and a variety of job opportunities, former Ashland residents dispersed throughout the U.S. in search of work. The Ashland Boys’ Association of Philadelphia officially chartered in 1912. The Philadelphia chapter was the backbone of the A.B.A. While other A.B.A. chapters were organized, no official records have been found. Mostly, former Ashland men participated as individuals. The Philadelphia contingent, coming home via train to Ashland was greeted by a proud coal mining hometown, and it evolved into the annual Mummers Parade. The parade brought thousands of non-Ashland residents into the borough for almost a century.

The sentiment of coming home and love of mothers began a legacy project. A committee was formed in 1937 to erect a statue to honor mothers – the Mothers’ Memorial. They chose as a subject James McNeill Whistler’s famous painting, An Arrangement in Grey and Black, No. 1, commonly known as, “Whistler’s Mother.” The committee felt that the memorial would be the symbol of the very foundation of the Ashland Boys’ Association. The motto of the A.B.A. is ‘Come on Home’ and the word home for Ashland men evoked thoughts of their mothers. 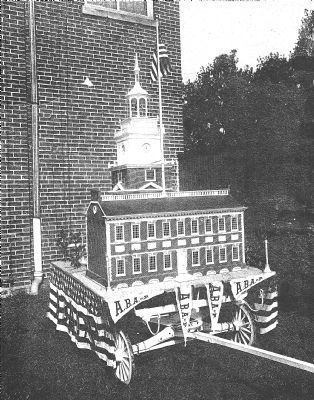 5. Ashland Boys' Association of Philadelphia
The Ashland Boys' Association of Philadelphia Chapter coming home via train to Ashland was greeted by a proud coal mining hometown. This was a Independence Hall float that was made and it represented the Philadelphia contingent. This float was pulled by the Philadelphia Ashland boys in early homecoming parades.
a whole community to come together to support the project. This homecoming organization disbanded in 1976, and this Pennsylvania State Historical Marker commemorates a truly unique organization that lasted for three quarters of a century.
— Submitted September 7, 2013, by Adam J. Bernodin, III of Ashland, Pennsylvania. 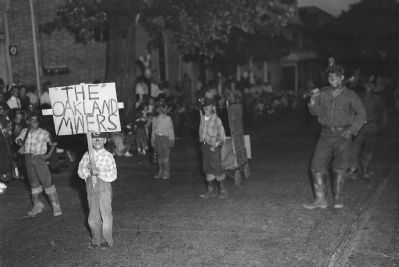 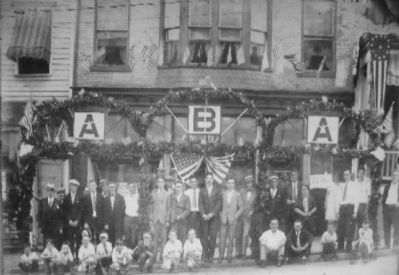 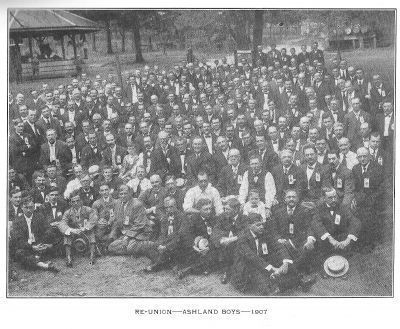 8. Re-Union — Ashland Boys — 1907
The annual homecoming reunions were held on Labor Day at Washington Park. Later years, the reunions were moved to Eureka Park in Ashland. 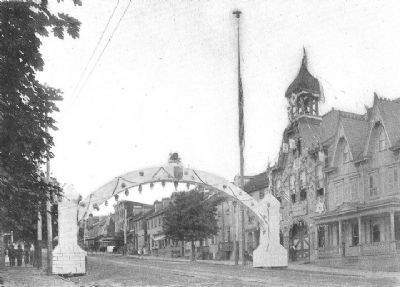 9. Arch Used In Ashland Boys' Association Scheme
The decorated arch shown above, in front of the Washington Fire Company No. 1 (Hookies), was placed across Centre street in the early 1900's. One arch stood here at the 13th and Centre Street location, and the other near 7th and Centre Street. The decoration arch lasted a couple years over the Ashland Boys' Association Homecoming weekend. 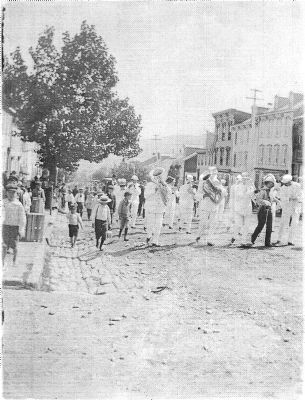 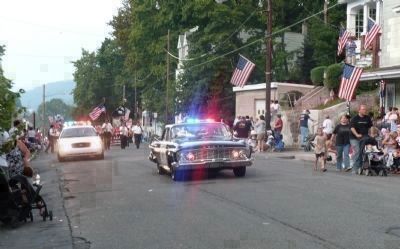 Ashland was a proud community greeting the Philadelphia contingent with a celebration. The following organizations were in line to greet the Philadelphia Branch of ABA in a informal parade: Ashland Boys Band, Philadelphia Branch of A.B.A., German Catholic Knights, Centralia Band, American Hose Company, Knights of Golden Eagle, Emmett Band, Washington Fire Company, Woodman of the World, Improved Order of Redman, Washington Light Infantry, the German Catholic Knights, a splendidly drilled organization formed the letters "A.B.A." in perfect accord and thrilled the spectators. The Ashland community all had roman candles and torches in there hands to greet the informal processions as it grew bigger.

Ashland was the only town to respond in this unique way of sentiment and pride while walking all the returnees home. The independent Ashland A.B.A. Mummers Club finally formed in 1928 according to the Ashland Daily News and at this point, everything was an organized parade. Curley Lentz from Ashland Boys' Association of Philadelphia faithfully carried an Olympic torch in the mummers parade. This was the symbol of the Philadelphia contingent and he carried the torch until he couldn't walk anymore. The parade was an anthracite coal region showcase that brought thousands of non-Ashland residents into Ashland for almost a century. The Saturday night before Labor Day will always be remembered in the hearts and minds of Ashland residents.

This is a photo of the beginning of the last mummers parade back in 2008. 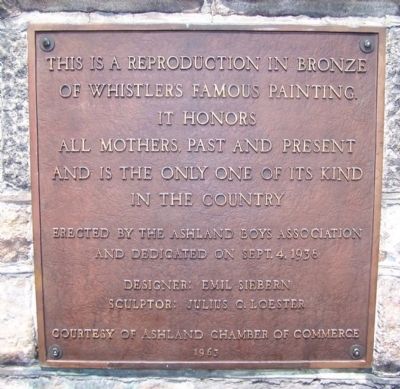 12. “This is a Reproduction in Bronze of Whistler’s Famous Painting.”
Inscription on brass plaque, visible in Photo 13, at base of Welcome Home Plaza. “It honors all mothers, past and present and is the only one of its kind in the country. Erected by the Ashland Boys Association and dedicated on Sept. 4, 1938. 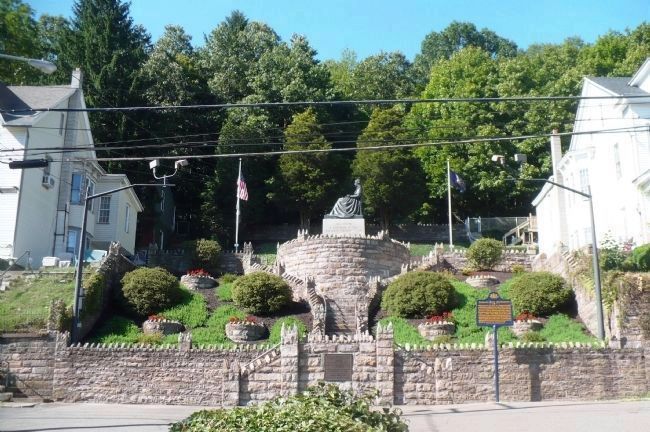 13. Mothers' Memorial at Welcome Home Plaza With Ashland Boys' Association Historical Marker
At an A.B.A. Homecoming Reunion in 1933, it was proposed to honor all Ashland mothers by erecting a monument or memorial. Members felt that such a memorial would represent the very foundation of the organization, because their motto was, “Come on home” and home evoked thoughts of one’s mother. A committee was formed in 1936 to investigate and plan the memorial. Some A.B.A. members, as well as many residents of the town, advocated the establishment of a library instead, but the memorial was decided upon and eventually gained the full support of the organization and the town. The idea of commissioning a sculpture based on the painting known as “Whistler’s Mother” was a unique one. The A.B.A. responded enthusiastically and raised over $6000 for the project. The seven foot high three-dimensional sculpture was designed by Emil Siebern and sculpted by Julius Loester. Both artists were sculptors from New York who specialized in public art—funerary decoration, memorials, park statuary, etc. Although they did not routinely work together, both participated in several projects overseen by the Works Progress Administration (WPA). The completed Ashland monument was made of bronze and placed atop an impressive stonework terrace built by the WPA in 1938. 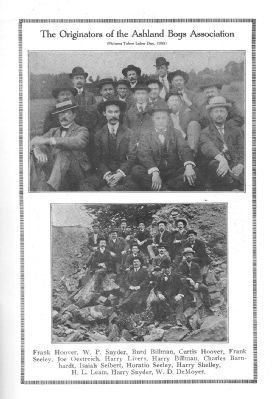 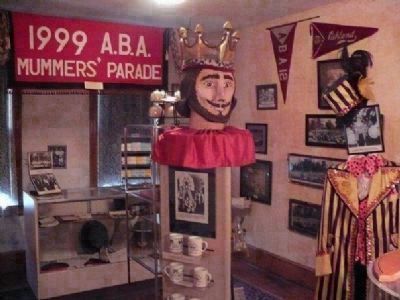 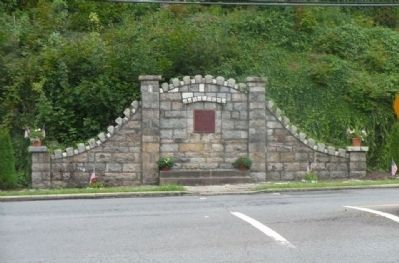