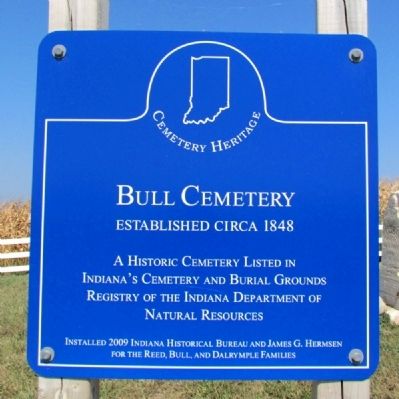 Topics and series. This historical marker is listed in this topic list: Cemeteries & Burial Sites. In addition, it is included in the Indiana Cemetery Heritage series list. A significant historical year for this entry is 1848. 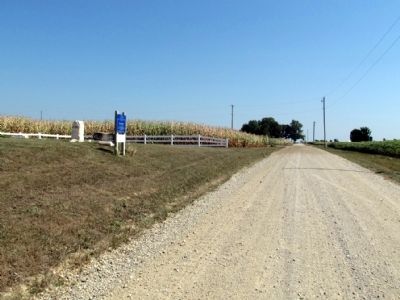 1. Indiana Cemetery Heritage Sign Initiative. A program of the Indiana Historical Bureau to mark cemeteries that are over fifty years old. (Submitted on September 11, 2013.)

2. Bull Cemetery at FindAGrave.com. (Submitted on September 18, 2013, by Mike Wintermantel of Pittsburgh, Pennsylvania.)

Additional commentary.
1. Reclaming the Cemetery
Dave Overton wrote an article back in 1978 and was republished in 2006 (Volume 38, Number 2) of the Michiana Searcher about the rural cemetery named Bull in Union Township. In his article he profiled Bull as one of the nearly lost cemeteries of Elkhart County. Now since that reprint, there is an update to Bull Cemetery that needs to be recorded.

Prior to Dave Overton’s reprint, I had been in search for the final resting place of my ancestor, William S. Reed who had married Christianna Wenger. For some time these were only names in a family history booklet my mother kept with her most important papers. About seven years ago while speaking to my cousin; she remembered that William S. Reed was buried in Bull Cemetery. Looking into the Cemeteries of Elkhart County Vol. II, p. 356, we noted that his stone was turned over and was too heavy to lift. My cousin’s husband offered to go to Bull Cemetery and together we would try to turn the stone over for verification. But when we got there, the cemetery was gone. All that was left was a pile of stones, mostly broken and crops planted over portion of the cemetery. This discovery began a long journey to reclaiming the cemetery.
This story is not about how the cemetery came to its sad condition. 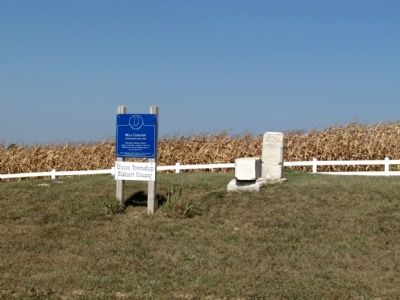 By Duane Hall, September 10, 2013
3. Bull Cemetery
View from roadside
I think in all cases, the same reason exists, and that is the interest and concern for the cemetery and all who may be buried there was lost long before the cemetery itself became lost. Lost from the memories of the descendants who are buried there, lost from the interest of the community in which they live. A recent comment made about Bull Cemetery by Dean Martin is very fitting and that is “I wish someone had shown interest in this cemetery a long time ago.”
My efforts to reclaim the cemetery began long before Mr. Overton’s reprint. When it was published, it gave me all the more reason to continue with the often frustrating efforts of being in Indianapolis, and having to direct all my requests remotely.
The restoration of Bull Cemetery has taken about seven years from my first discovery to the placing of the Historical Marker at the cemetery on August 22, 2009. I am appreciative of the hard work that the local agents performed, including the Union Township Trustee and his board and staff, who had the patience to bear my impatience. There were a lot of steps that needed to be done in a proper and orderly sequence that obviously took time. It has never been truer as in this case, “if it is worth doing, it is worth doing it right.”

Bull Cemetery is now shown on the books of recorded cemeteries both in Elkhart County as well as at the Department of Natural Resources in Indianapolis, who ultimately oversees abandoned cemeteries. The DNR and the Indiana Historical Bureau have been most helpful providing guidance as to how to proceed. Along with the Cemetery being recorded, the full quarter-acre has been reclaimed, fenced in with an attractive 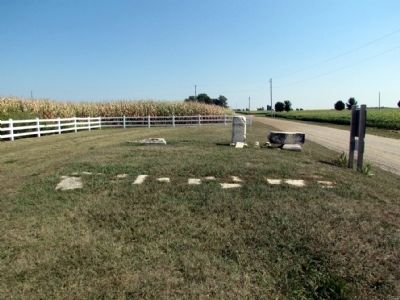 By Duane Hall, September 10, 2013
4. Bull Cemetery
View of entire cemetery
white rail, and the broken stones have been reassembled as best as possible in the order in which it was recorded for the 1990 Cemeteries of Elkhart County.
Dave Overton identifies Israel R. Dalrymple, as one of the first burials. He was the first schoolteacher in Union Township. Stephen Bull who is also buried there was a justice of the peace in 1857. William S. Reed owned more than 200 acres including the land surrounding the cemetery and was the postmaster in Southwest, IN. It is for these families and their descendants that the Historical Bureau Cemetery Sign was erected. Now that the community has re-established a lost cemetery, the important job for all of us is to convey that oral and written heritage that makes a community proud of its ancestors and what they did before us. If that happens, there would be no need for cemetery restorations, just preservations. This success story I pray will encourage and inspire others who see neglected or lost cemeteries to act now while there is still time. It is often quoted (from who I know not who to give credit), that a people who know not where they have come from, never will know where they are going.”

Information about William S. Reed
William S. Reed b. April 8, 1799 in Fauquier County, VA and died May 18, 1874. He married Christianna Wenger, born June 5, 1785 at Edom, Rockingham Co., VA and died December 22, 1850. She is buried at Old Yellow Creek Cemetery, Harrison Township. Together they had five children all who remained in the county:
Abraham I. Reed born July 1, 1818 in Rockingham Co., VA and died March 2, 1897. He is buried at Yellow Creek Frame Cemetery. He married Mericha “Mary” 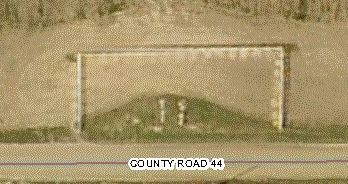