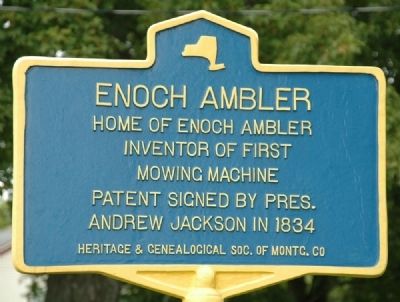 Topics. This historical marker is listed in these topic lists: Agriculture • Man-Made Features.

Other nearby markers. At least 8 other markers are within 4 miles of this marker, measured as the crow flies. This Vicinity Raided (about 700 feet away, measured in a direct line); Fort Lewis (approx. 0.2 miles away); Currytown Reformed Church (approx. ¼ mile away); Canagere (approx. 2.8 miles away); This Is Mohawk Country 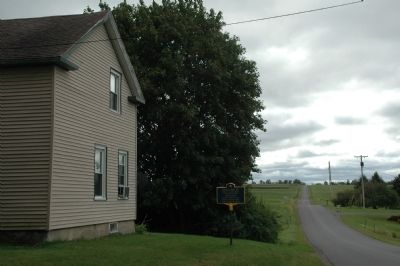 Regarding Enoch Ambler.
Enoch Ambler, Inventor of the Mowing Machine.
Enoch Ambler, formerly a resident of the town of Root, has in his possession letters patent granted December 23, 1834, and executed by Andrew Jackson, President of the United States, securing to him the sole right to a machine of his invention for "cutting hay and grain. " His discovery embraced nearly all the most important principles embodied in the machines now sold. The driving-wheel, crank-movement and guards protecting the knife were as now produced, but the knife itself was a straight edged blade, instead of the more efficient saw-toothed scythe of the modern machines. Mr. Ambler unfortunately had less success in introducing his machine than in constructing it, and, himself hardly aware of its immense value, allowed his patent to expire without availing himself of it. The invention was revived, and the great fortune and grater fame which the inventor deserved went to another than Mr. Ambler, who is now a humble resident of Fulton county. - History of Montgomery 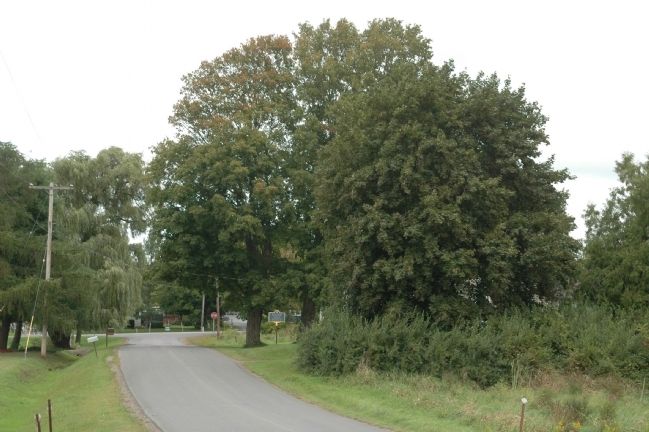 Reportedly Ambler’s original mowing machine was put on trial at a farm near his home in the hamlet of Currytown by a noted and prominent farmer, William P. Dievendorf, “He (Dievendorf) mowed something over an acre of grass, but the scythe being straight and smooth and no guards being used, the work was but imperfectly done. The machine was condemned as useless.” In an area newspaper, the Gloversville Intelligencer, dated March 18, 1873, it's reported that “Ambler sold out all his right and title (to his invention) to Mr. (Cyrus) McCormick, the “original” mowing machine man for $250.”

Ambler later moved from the town of Root to Bleecker, which is north of Gloversville, becoming a shingle maker there. According to Root Historian Bill Maring, Amber died of an accidental gunshot wound after a friend's new gun went off while the friend was showing it to Ambler. Ambler, being a man of little means, was buried in the Bleecker Cemetery at the town's expense.

On July 22nd, 2011 the Enoch Ambler marker was dedicated in the presence of Root Town Historian Bill Maring, as well as members of the Root Historical Society and members of the Montgomery County Heritage and Genealogical Society. Special guests also in attendance where Enoch Ambler’s great-granddaughter Jane Ambler, of 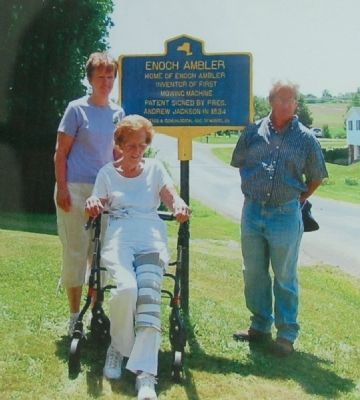 By Howard C. Ohlhous, September 14, 2013
4. Enoch Ambler Marker Unveiling
On July 22nd, 2011 the Enoch Ambler marker was unveiled. Present for the ceremony and pictured here are, left to right, Enoch Ambler’s great-great- granddaughter Nancy Ambler Weinberg, of Washington, D.C. his great-granddaughter Jane Ambler, of Schenectady, and Root Town Historian, Bill Maring. This photo is on display at the Root Historical Society, which is located in the hamlet of Flat Creek, Montgomery County.
Schenectady, and his great-great-granddaughter Nancy Ambler Weinberg, of Washington, D.C.

There is an example of Ambler's 1836 Patent Mowing Machine on display at the Henry Ford Museum in Dearborn, Michigan.