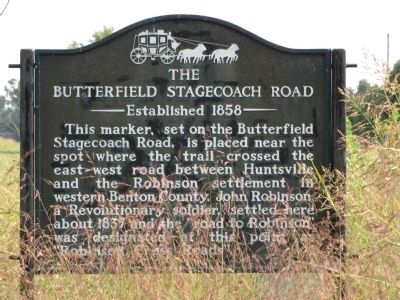 This marker, set on the Butterfield Stagecoach Road, is placed near the spot where the trail crossed the east-west road between Huntsville and the Robinson settlement in western Benton County. John Robinson, a Revolutionary soldier, settled here about 1837 and the "road to Robinson" was designated at this point as "Robinson Cross Roads".

Topics and series. This historical marker is listed in these topic lists: Patriots & Patriotism • Roads & Vehicles • Settlements & Settlers • War, US Revolutionary. In addition, it is included in the Butterfield Overland Mail series list. A significant historical year for this entry is 1837.

Other nearby markers. At least 8 other markers are within 2 miles of this marker, measured as the crow flies. Original Site of Bloomington (Mudtown) Arkansas (here, next to this marker); Evaporator Near Railroad Track (within shouting distance 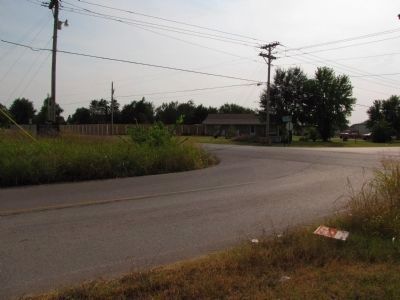 Editor’s want-list for this marker. Photo of the marker at its new location. • Can you help?
Share this page.