Bernard Whitehurst and the Whitehurst Case / Montgomery: Learning From the Past 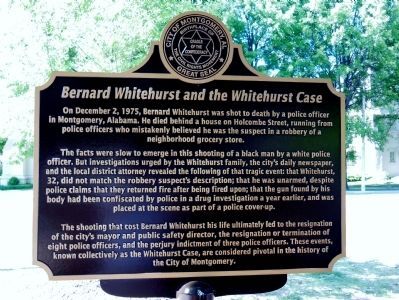 On December 2, 1975, Bernard Whitehurst was shot to death by a police officer in Montgomery, Alabama. He died behind a house on Holcombe Street, running from police officers who mistakenly believed he was the suspect in a robbery of a neighborhood grocery store.

The facts were slow to emerge in this shooting of a black man by a white police officer. But investigations urged by the Whitehurst family, the city’s daily newspaper, and the local district attorney revealed the following of that tragic event: that Whitehurst, 32, did not match the robbery suspect’s description; that he was unarmed, despite the police claims that the returned fire after being fired upon; that the gun found by his body had been confiscated by police in a drug investigation a year earlier, and was placed at the scene as a part of a police cover-up.

The shooting that cost Bernard Whitehurst his life ultimately led to the resignation of the city’s mayor and public safety director, the resignation or termination of eight police officers, and the perjury indictment 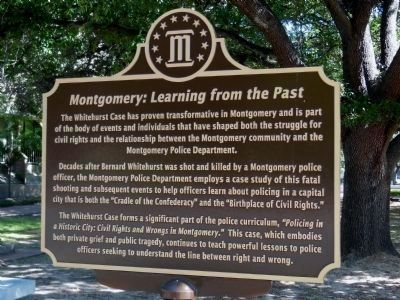 Click or scan to see
this page online
of three police officers. These events, known collectively as the Whitehurst Case, are considered pivotal in the history of the City of Montgomery.

(side 2)
Montgomery: Learning from the Past

The Whitehurst Case has proven transformative in Montgomery and is part of the body of events and individuals that have shaped both the struggle for civil rights and the relationship between the Montgomery community and the Montgomery Police Department.

Decades after Bernard Whitehurst was shot and killed by a Montgomery police officer, the Montgomery Police Department employs a case study of this fatal shooting and subsequent events to help officers learn about policing in a capital city that is both the “Cradle of the Confederacy” and the “Birthplace of Civil Rights.”

The Whitehurst Case forms a significant part of the police curriculum, “Policing in a Historic City: Civil Rights and Wrongs in Montgomery.” This case, which embodies both private grief and public tragedy, continues to teach powerful lessons to police officers seeking to understand the line between right and wrong.

Erected 2013 by City of Montgomery.

Topics. This historical marker is listed in these topic lists: African Americans • Civil Rights. A significant historical month for this entry is December 1865. 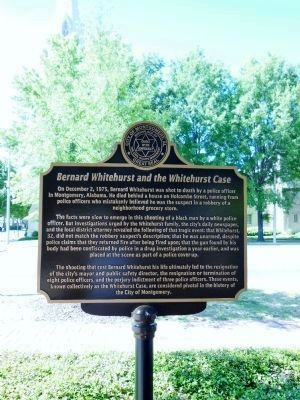 Also see . . .  Resolution expresses regret for Whitehurst shooting. The Montgomery City Council adopted a resolution that formally expressed regret for the shooting death of Bernard Whitehurst and voted to place this historical marker describing the incident. (Submitted on October 15, 2013, by Cosmos Mariner of Cape Canaveral, Florida.) 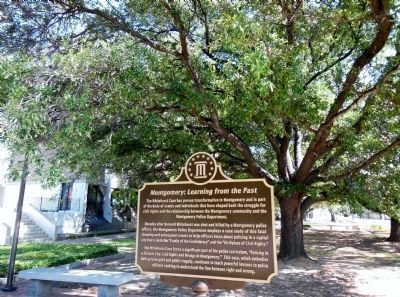