King of the Road! 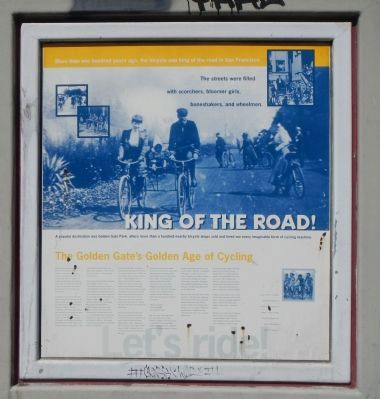 More than one hundred years ago, the bicycle was king of the road in San Francisco.

The streets were filled with scorchers, bloomer girls, bone shakers, and wheelmen.

More than one hundred years ago, the bicycle was king of the road in San Francisco. It was the Golden Age of Cycling – everybody rode a bike. The whole city, the state, the country – it seemed even the whole world had gone bicycle mad. The streets were filled with scorchers, bloomer girls, boneshakers and wheelmen from the working class to aristocrats.

The bicycle craze of the 1890s began with the introduction of the safety bicycle. Unlike the earlier fixed gear model, these new safety bicycles, as the name implies, easy to handle. They were considerably safer than the high wheeler which only the adventurous few had dared to mount, Speedy, accessible to the masses and affordable with two equal sized wheels, new chain drive technology and pneumatic tires, these safety bicycles immediately became wildly popular. It was reported that during the 1890s nearly half of the city’s population – that’s sixty-five thousand bicyclists – 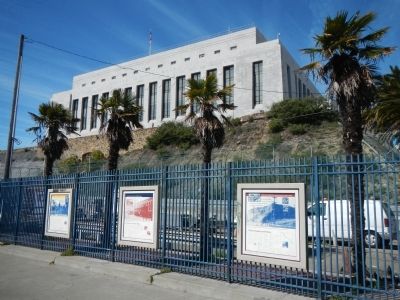 Photographed By Barry Swackhamer, March 16, 2014
2. King of the Road! Marker, on the left
The San Francisco Mint is in the background.

Click or scan to see
this page online
ruled the streets of San Francisco.

Piano sales plummeted, theaters slumped and shoemakers sat idle, as San Franciscans were to busy bicycling. A popular destination was Golden Gate Park, were more than a hundred nearby bicycle shops sold and hired out every imaginable form of cycling machine: velocipedes, big wheels, sociables, tricycles, penny farthings, tandems, and safety bicycles. Bicycle clubs with names like the Pathfinders, Bay City Wheelmen, and Ramblers met up at the “Cycler Rest” inside the park or headed over to the track race in the Velodrome near the Panhandle. There wasn’t a single car to be found on San Francisco streets – the teeming masses of bicyclists shared the roads with streetcars and horses!

During the Golden Age of Cycling, the bicycle made a huge impact on the social and economic life of the city. In 1892 the most popular song of the day was “Daisy Daisy – A Bicycle Built for Two.” A regular column in the San Francisco Examiner, “Cycling Up to Date,” kept pedalers informed about track racing, club rides, riding tips, and bicycle outings. The Examiner also organized the “Yellow Fellow Transcontinental Bicycle Relay,” 3,500 mile SF-NY bike ride. Teams of yellow-clad bicyclists rode fifteen-mile relays across the country to complete the ride in only thirteen days and twenty-nine minutes

Yet bicycling proved to be much more than a mere social pastime. Bicycles came to the rescue as an emergency mail service during the turbulent Pullman Railway Strike of 1894. Loaded down with sixty pounds of mail, eight bicyclists relayed in shifts for eighteen hours to complete the 210 mile Fresno-SF Bicycle Mail route.

Pressure from bicyclists also helped create decent paved asphalt roads. More than five thousand bicyclists paraded down Market Street in the “Good Roads Rally” of 1896. The two-mile long nighttime parade featured wildly decorated bicycles, whose riders struggled along deeply rutted and potholed roads. Enthusiastic spectators lined the route in sympathy with the wheelmen and their movement. One poetic cyclist described the condition of the roads as:

Men and women, both young and old, were passionate about bicycling. However, for ladies in particular, bicycles or “freedom machines” represented newfound independence and contributed immensely to the emancipation of women.

Instead of long skirts and corsets, many women opted for bloomers – ankle-length puffy pants – as their bicycle suit of choice. Bloomers girls (though scandalous at first) led the ultimately successful ‘rational dress’ movement. Suffragettes freely pedaled through the streets of San Francisco a full fifteen years before they won the right to vote!

More and more women took off on cycling adventures, often without chaperones. Wearing a skirt and packing a pistol, Miss Margaret Valentine LeLong rode her bicycle, by herself from Chicago to San Francisco. For two months in 1896, she pedaled along the railroad tracks for several thousand miles on her one-speed safety bicycle!

Emotionally charged debate continued to rage across the county as to the appropriateness of women astride two wheels – it was even illegal in some states for women to ride. At least in San Francisco it became socially acceptable and common to see women on wheels. In fact, for many women, the bicycle was seen as “deliverance, revolution, salvation.”

However, all good things come to an end. The first bicycle bust occurred in the early 1900s. Slowly the newfangled automobile began its reign on the freshly paved streets of San Francisco. The rest is history.

Recently, a new Golden Age of Cycling has begun and our charming, indomitable “freedom machine” is back! To join in, contact the San Francisco Bicycle Coalition at www.sfbike.org or (415) 431-BIKE.

Topics and series. This historical marker is listed in these topic lists: Roads & Vehicles • Sports. In addition, it is included in the Women's Suffrage series list. A significant historical year for this entry is 1892.

More about this marker. This portion of Duboce Avenue is a biycle-way.