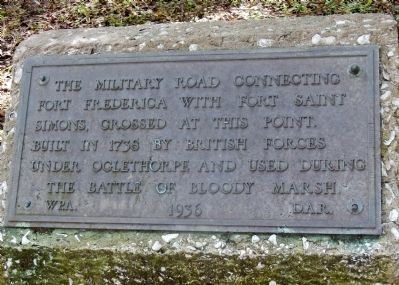 The Military Road connecting Fort Frederica with Fort Saint Simons, crossed at this point. Built in 1738 by British forces under Oglethorpe and used during the Battle of Bloody Marsh.
W.P.A. 1936 D.A.R.

Erected 1936 by Works Progress Administration and the Daughters of the American Revolution.

Topics and series. This historical marker is listed in these topic lists: Colonial Era • Forts and Castles • Roads & Vehicles • Settlements & Settlers. In addition, it is included in the Daughters of the American Revolution (DAR), and the Works Progress Administration (WPA) projects series lists. A significant historical year for this entry is 1738.

Location. 31° 12.629′ N, 81° 22.531′ W. Marker is in St. Simons Island, Georgia, in Glynn County. Marker is on Frederica Road, 0.2 miles north of South Harrington Road, on the right when traveling north. The marker is short and somewhat hidden by trees and undergrowth making it difficult to see from the street, even though only a few feet off Frederica Road. Touch for map. Marker 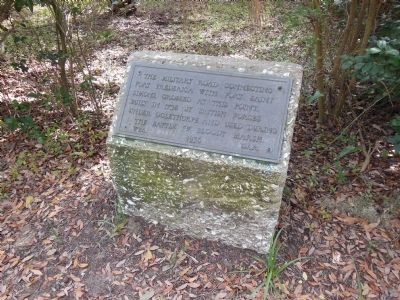 Click or scan to see
this page online
is in this post office area: Saint Simons Island GA 31522, United States of America. Touch for directions.

Also see . . .
1. Battle of Bloody Marsh. On July 7, 1742, English and Spanish forces skirmished on St. Simons Island in an encounter later known as the Battle of Bloody Marsh. This event was the only Spanish attempt to invade Georgia during the War of Jenkin's Ear. (Submitted on March 30, 2014, by Cosmos Mariner of Cape Canaveral, Florida.)

2. The Battle of Bloody Marsh. The Battle of Bloody Marsh took place on July 18, 1742 between Spanish and British forces on St. Simons Island, part of the Province of Georgia, resulting in a victory for the British. Part of a much larger conflict known as the War of Jenkins' Ear, the battle was for the British fortifications of Fort Frederica and Fort St. Simons, with the strategic goal the sea routes and 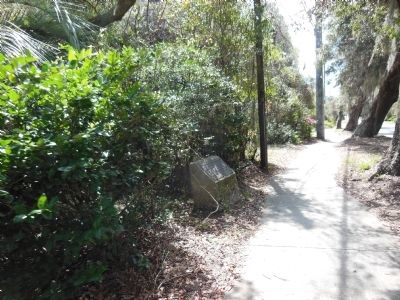 Photographed By Cosmos Mariner, March 21, 2013
3. The Military Road Marker (sidewalk view)
Wide view of marker, sidewalk, and Frederica Road looking south. The marker is somewhat hidden from the road by trees and undergrowth. The marker is more likely to be noticed by pedestrians and cyclists than by vehicle drivers.
inland waters they controlled. (Submitted on March 30, 2014, by Cosmos Mariner of Cape Canaveral, Florida.) 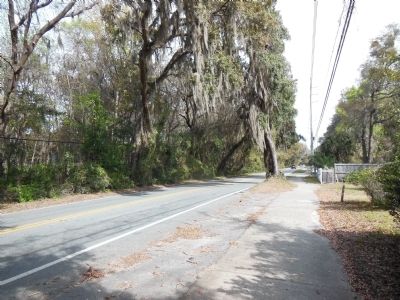