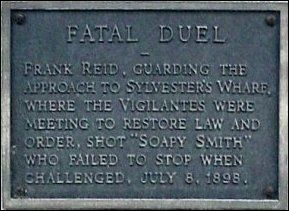 Photographed By Jeff Smith, July 8, 1998
1. Fatal Duel Marker
Inscription.
Fatal Duel. . Frank Reid, guarding the approach to Sylvester's Wharf, where the vigilantes were meeting to restore law and order, shot "Soapy Smith" who failed to stop when challenged, July 8, 1898. . This historical marker was erected in 1998. It is in Skagway Alaska

Frank Reid, guarding the approach to Sylvester's Wharf, where the vigilantes were meeting to restore law and order, shot "Soapy Smith" who failed to stop when challenged, July 8, 1898.

Topics. This historical marker is listed in this topic list: Notable Events. A significant historical date for this entry is July 8, 1901. 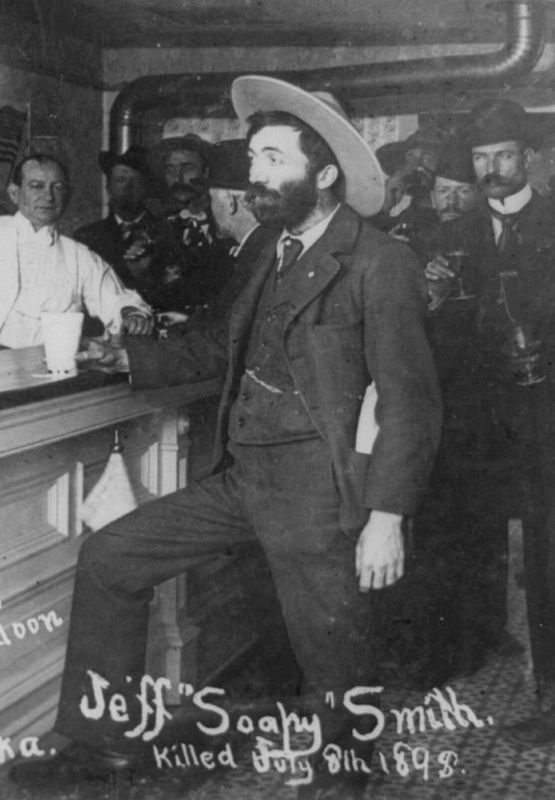 Source: US Library of Congress via Wikipedia Commons
2. Jefferson “Soapy” Smith standing at bar in saloon in Skagway, Alaska. July 1898

2. The port of Skagway. Wikipedia entry:
Between 1897-1898, Skagway was a lawless town, described by one Canadian Mountie as "little better than a hell on earth." Fights, prostitutes and liquor were ever-present on Skagway's streets. The most colorful resident of this period was bad man Jefferson Randolph "Soapy" Smith. He was a sophisticated swindler who liked to think of himself as a kind and generous benefactor to the needy. He had gracious manners and he gave money to widows and stopped lynchings, while at the same time operating a ring of thieves who swindled prospectors with cards, dice, and the shell game. His telegraph office charged 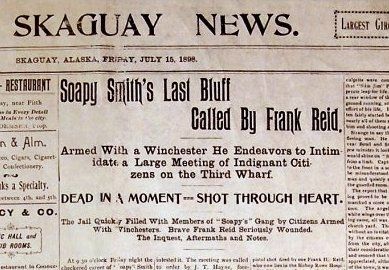 Source: The Skagway News via Wikipedia Commons
3. The Skaguay News, Friday, July 15, 1898
“Soapy Smith’s Last Bluff Called by Frank Reid. Armed with a Winchester he endeavors to intimidate a large meeting of Indignant Citizens on the Third Wharf. Dead in a moment — shot through heart. The jail quickly filled with members of “Soapy’s” Gang by citizens armed with Winchesters. Brave Frank Reid seriously wounded. The inquest, aftermaths and notes.”
five dollars to send a message anywhere in the world. [$5 in 1898 is the equivalent of more than $2700 today.] (Submitted on December 22, 2008, by Mike Stroud of Bluffton, South Carolina.)

3. The Shootout on Juneau Wharf. Wikipedia entry
: “The duel ended with both Smith and Reid being fatally shot – Smith was shot in the heart and died shortly afterwards, and Reid dying 12 days later due to injuries from the fight. The fight was the result of a power struggle for control of the town of Skagway, which at the time was booming during the Klondike Gold Rush.” (Submitted on July 23, 2011, by Jeff Smith of Corona, California.) 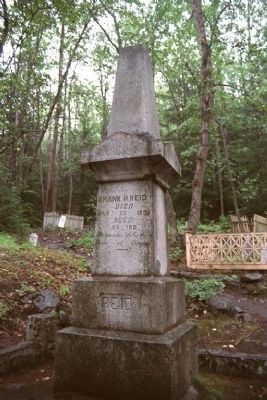 Photographed By Mike Stroud, 1996
4. Gravesite of Frank Reid - Hero of Skagway
Reads, "He gave his life for the honor of Skagway" 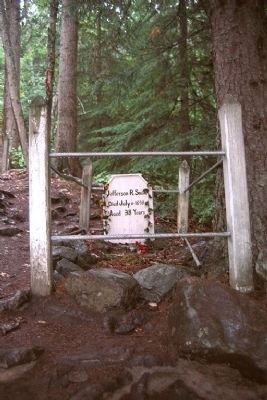 Editor’s want-list for this marker. Wide shot of the marker and its surroundings. • Can you help?
Share this page.