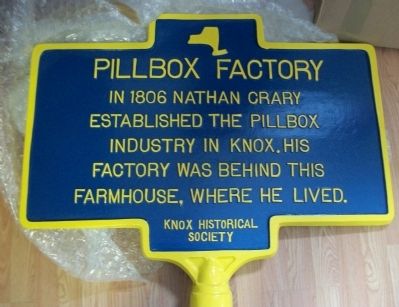 Photographed By Howard C. Ohlhous, May 3, 2014
1. Pillbox Factory Marker
Inscription.
Pillbox Factory. . In 1806 Nathan Crary established the pillbox industry in Knox. His factory was behind this farmhouse, where he lived. . This historical marker was erected in 2014 by Knox Historical Society. It is in Knox in Albany County New York

In 1806 Nathan Crary established the pillbox industry in Knox. His factory was behind this farmhouse, where he lived.

Topics. This historical marker is listed in these topic lists: Industry & Commerce • Science & Medicine. A significant historical year for this entry is 1806. 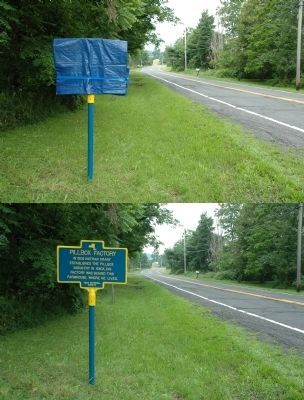 Photographed By Howard C. Ohlhous, July 13, 2014
2. Pillbox Factory Marker - Before and After Unveiling

The following is taken from a presentation by Miss Leslie W. Brower and Mr. Arthur Quay at the Annual Meeting of the Early American Industries Association at the Albany Institute of History and Art on October 14, 1939, as reported in the Association’s 1940 newsletter, The Chronicle. The relevant portion of The Chronicle was attached to Mr. Ogden Brower’s June 1, 1955 letter to Mr. Albert B. Corey, NYS Historian, requesting that a historic marker be placed at the site of Nathan Crary’s pill box factory (at Ogden Brower’s farmhouse). The letter and attachments are preserved at the NYS Museum.

Nathan Crary organized the Knox pill box industry in 1806. According to Miss Brower, the industry continued until 1906 (however, her brother, Ogden Brower argues in his letter, based on reliable authority, that wooden pill boxes were still made in Knox in 1926).

The boxes were made from basswood, and were made nowhere else in the country or the world. Three families were prominent in the manufacture of the boxes: the Crarys, the Quays and the Champions. Aside from these concentrated groups, work was “lent out” to women in nearly all the homes in the hamlet. When completed the boxes were packed in “tierces” of over 10,000 boxes. The average daily product of one pair of hands was from 1600 to 1800 boxes. 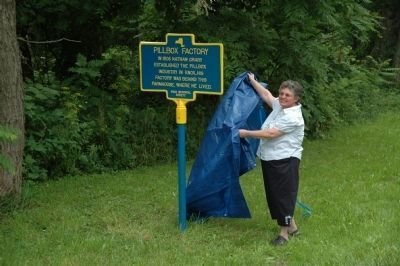 Miss Brower reports that life in the little Town of Knox was primitive in the early 1800’s. “It was heavily wooded with narrow dirt roads, full of stones over which wagon wheels would glance and slide down, with steep ascents and declines where squeaky brakes would be applied. Imagine stepping to one side to let a hay-rick rumble by, piled to the ridge poles with tierces, filled with wooden pill boxes and bound, not for Albany, but for Rensselaer by ferry boat to the freight office and hence down the Hudson. These were pioneer days and this a pioneer industry. The invention of machinery to turn out glass vials and tin boxes and the scarcity of basswood trees were the chief causes for the end of the industry.”

According to Arthur Quay, the best basswood trees in the forest were selected, and a large chip was chopped from the base of the tree to see whether or not the wood would split freely, as straight-grained timber was especially required. The trees were sawed by hand into blocks, and the blocks were then split into four, six or eight pieces, depending on the size of the blocks. After splitting, the timber was allowed to dry or “cure.” For many 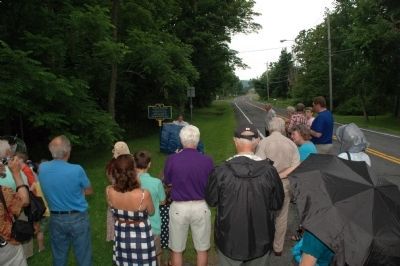 Photographed By Howard C. Ohlhous, July 13, 2014
4. Pillbox Factory Marker
The dedication of the pillbox marker was well attended by Knox Historical Society members, guests and well wishers.
years, the shavings known as the “winding” or “hoop” shavings, which formed the sides of the boxes, and the heavier shavings known as “stamp” shavings, from which the tops and the bottoms of the boxes were made, were cut by hand. Later, this work was done by horse power. 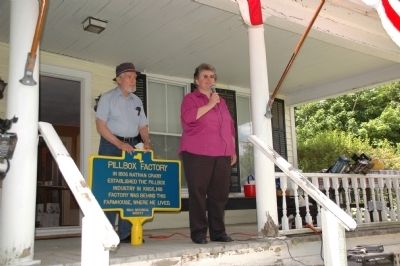 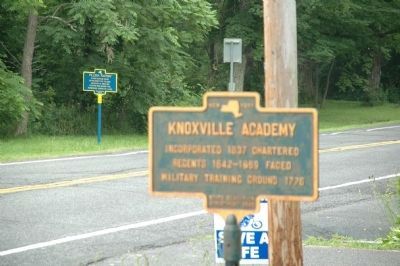 Photographed By Howard C. Ohlhous, July 13, 2014
6. Pillbox Factory Marker
The Pillbox Factory marker, in the background, is not too far from the Knoxville Academy marker, both on Route 156 in the hamlet of Knox. 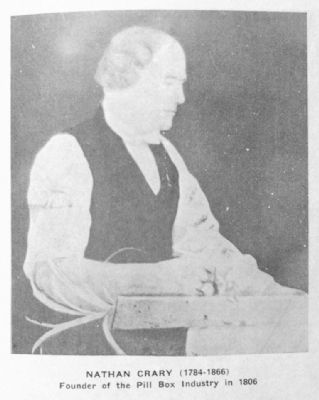 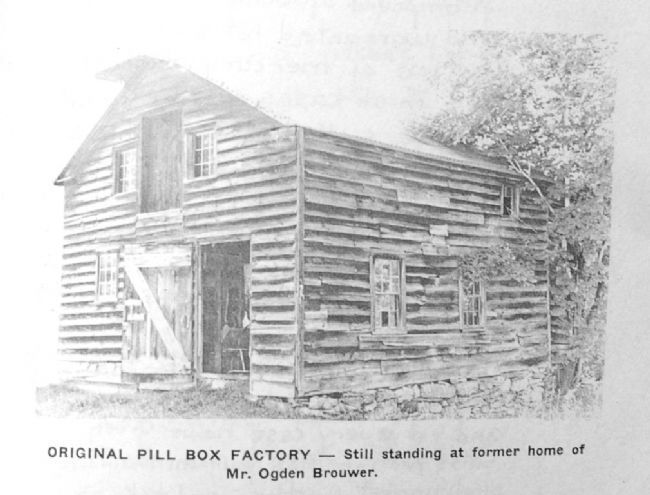 Photographed By Howard C. Ohlhous, May 6, 2014
8. The Orginal Pillbox Factory in Knox
The original pillbox factory no longer exists.