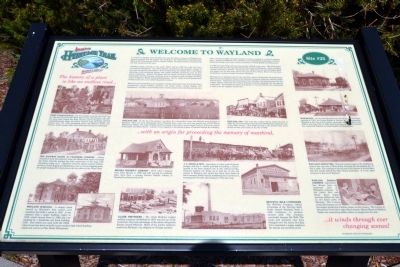 It is hard to imagine now, but 200 years ago, the place we know as Wayland was densely forested and the people who lived here, the Match-E-Be-Nash-She-Wish Band of the Pottawatomi, lived in settled villages, farming, hunting, and gathering the rich resources of the area.

Outsiders began arriving in the early 1800's and by 1826 the land had been surveyed for settlement. Col. Isaac Barnes, attracted by the extensive forests of pine and hardwoods, purchased a tract of land along the Rabbit River and began operating a mill producing lumber and wooden shingles, giving the area its first name, Lumberton. Nelson Chambers and his family arrived in 1837 and began clearing the land for farming, using the trees he cleared to make shingles which he sold to markets in Battle Creek and Kalamazoo. By the 1840's several families had settled in the ara, now called Chamber’s Corners.

Wayland would probably have remained a sleepy backwater town if it hadn’t been strategically placed halfway between two larger towns, Grand Rapids and Kalamazoo. In 1855 a road of thick-sawn wooden planks was built between the two cities, running straight through 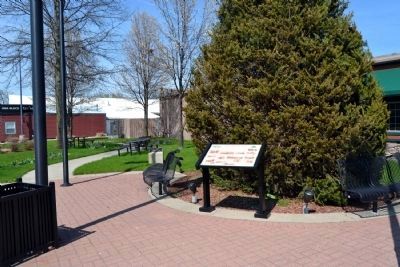 By Duane Hall, May 6, 2014
2. Welcome to Wayland Marker
Located in a small city park at the
northeast corner of Main Street and Superior Street

Click or scan to see
this page online
Chamber’s Corners, making it a natural stopping place. Almost immediately, new industries were established in Chamber’s Corners, taking advantage of the easy access to markets in Grand Rapids and Kalamazoo.

In 1868 the name Wayland was permanently affixed to the town. The Plank Road was short-lived, but the railroad arrived with service to Wayland in 1870, providing another stimulus to growth. Eventually, the right-of-way for the old Plank Road was taken over by the state and by the turn of the century Route 131 had been established, running through downtown Wayland.

Wayland was a bustling town by the mid 20th century. Businesses stretched along Main Street and Superior Street with factories clustered along the railroad tracks west of town. Numerous denominations built churches and organizations like the Ladies Library club and the various fraternal societies organized for the general social good. Surrounded by farms and dairies, it was the hub for the countryside, a place to go for supplies and for fun.

First Nation People - The first people to occupy this land were the Match-E-Be-Nash-She-Wish Band of the Pottawatomi, who still live here today. People like Kelly Church and her daughter Cherish, nationally-known black ash basket weavers, keep the language and culture alive. The 1919 photograph shows the 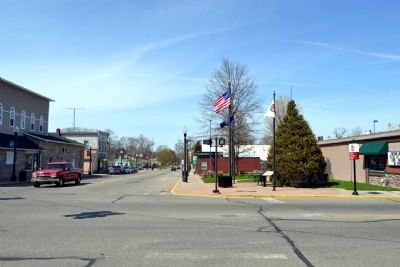 By Duane Hall, May 6, 2014
3. View to North along N. Main Street
Medawis sisters and relatives, basket makers from whom Kelly and Cherish are descended.

The Halfway House at Chambers Corners -
Nelson Chambers built this hostelry when the Plank Road pushed through the forest, literally putting the little community on the map, with Chamber’s name on it. Chambers Corners, almost exactly halfway between Grand Rapids and Kalamazoo, was a natural stopping place for people making the trip between the two cities on the Plank Road.

Wayland Schools - A shingle shack served as Wayland’s first school until residents had built a school in 1862. It was replaced with a larger building (right) in 1872, which burned down in 1896 and was replaced by a handsome red brick building (left). This school was used until the 1950s when it was torn down to build a more modern high school building which now serves as Pine Street Elementary.

Wayland 1869 - By the time this picture was taken, the community’s name had officially been changed to Wayland. This very early photograph shows Wayland from a spot very near the present site of Pine Street Elementary School. The large building with the steeple is the town’s second school built in 1872 at the corner of Sycamore and Main Street. A group of boys appears to be playing a game of baseball behind the building. 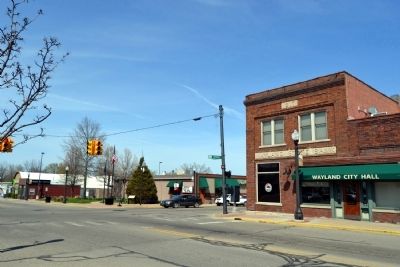 By Duane Hall, May 6, 2014
4. Wayland State Bank (1917), now used as City Hall
Located across Superior Street from the marker
Street, before the fire of 1883, one of several blazes that devastated Wayland around the turn of the 20th century. This block burned to the ground once more, almost twenty years later, in the fire of 1902.

J.L. Smith & Son - Agriculture is what made Wayland prosper and Jay L. Smith provided everything a farmer needed in his store located next to the railroad tracks. Pictured, farmers are lining up to load hay at the rail station in Wayland, just across the street from Smith & Son’s business. Smith was the middleman for local farmers, arranging for the sale and transport of the hay-crop.

Clark Brothers - The Clark Brothers lumber milling company, established in 1878 was just one of the businesses that took advantage of the dense old growth forests around Wayland. Much of the lumber milled in southwest Michigan was shipped to Chicago markets.

Helvetia Milk Condenser - The Helvetia Company, taking advantage of the thriving dairy herds around Wayland, built a milk condenser to produce canned milk. The company eventually became Pet Milk. The name and products may have changed over the years, but they have remained a major employer 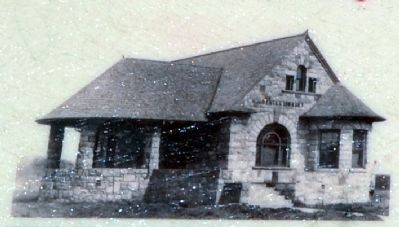 By Duane Hall, May 6, 2014
5. Henika Library Then
Close-up of image on marker
for almost one hundred years.

Wayland’s Great Fire - Wayland residents gape at the smoldering ruins of the west side of Main Street following the devastating fire of July 2, 1902. The building on the left end of the picture is the red barn that still stands behind the Main Street businesses. It is the oldest structure in downtown Wayland.

Wayland Dahlia Gardens - Agriculture has always been an important part of Wayland’s economy. In the 1940's Earl and Hazel Ryno began growing dahlias for sale on two farms north of Wayland. The business eventually became one of the largest producers of dahlia tubers in the country. The women in this picture (from left to right, Hazel Jensen, Myrtle Moore & Mildred Zupan) are separating dahlia tubers in preparation for sale.

Erected by City of Wayland.

Topics. This historical marker is listed in these topic lists: Disasters • Industry & Commerce • Native Americans • Settlements & Settlers. A significant historical month for this entry is July 1843. 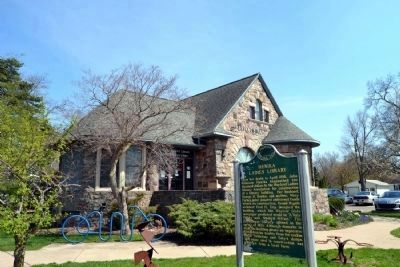 More about this marker. Marker is at Site #25 of the Allegan County Heritage Trail.