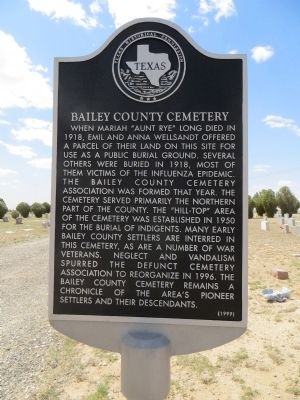 When Mariah “Aunt Rye” Long died in 1918, Emil and Anna Wellsandt offered a parcel of their land on this site for use as a public burial ground. Several others were buried in 1918, most of them victims of the influenza epidemic. The Bailey County Cemetery Association was formed that year. The cemetery served primarily the northern part of the county. The “hill-top” area of the cemetery was established in 1950 for the burial of indigents. Many early Bailey County settlers are interred in this cemetery, as are a number of war veterans. Neglect and vandalism spurred the defunct cemetery association to reorganize in 1996. The Bailey County Cemetery remains a chronicle of the area's pioneer settlers and their descendants.

Topics. This historical marker is listed in this topic list: Cemeteries & Burial Sites. A significant historical year for this entry is 1918. 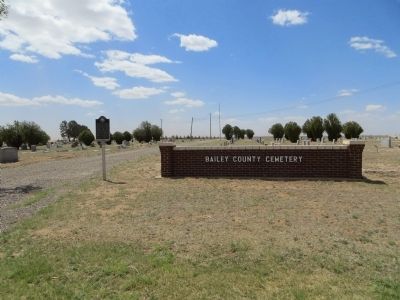 Click or scan to see
this page online
1018, half a mile east of Farm to Market Road 2079, on the right when traveling east. Touch for map. Marker is in this post office area: Muleshoe TX 79347, United States of America. Touch for directions.