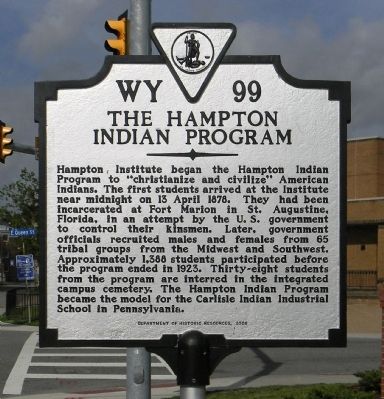 Hampton Institute began the Hampton Indian Program to “christianize and civilize” American Indians. The first students arrived at the Institute near midnight on 13 April 1878. They had been incarcerated at Fort Marion in St. Augustine, Florida, in an attempt by the U.S. government to control their kinsmen. Later, government officials recruited males and females from 65 tribal groups from the Midwest and Southwest. Approximately 1,388 students participated before the program ended in 1923. Thirty-eight students from the program are interred in the integrated campus cemetery. The Hampton Indian Program became the model for the Carlisle Indian Industrial School in Pennsylvania.

Topics and series. This historical marker is listed in these topic lists: Education • Native Americans. In addition, it is included in the Historically Black Colleges and Universities, and the Virginia Department of Historic Resources series lists. A significant historical date for this entry is April 13, 1878. 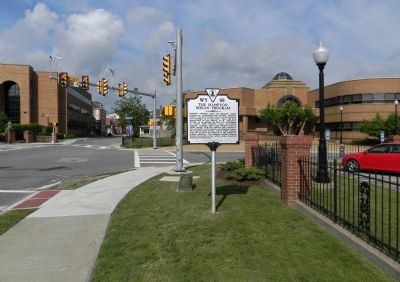 Photographed By PaulwC3, May 15, 2014
2. Wide view of The Hampton Indian Program Marker

Click or scan to see
this page online
1.332′ N, 76° 20.246′ W. Marker is in Hampton, Virginia. Marker is at the intersection of East Tyler Street and East Queen Street, on the right when traveling south on East Tyler Street. The marker is located on the grounds of Hampton University adjacent to Parking Lot 21. Touch for map. Marker is in this post office area: Hampton VA 23668, United States of America. Touch for directions.

Related marker. Click here for another marker that is related to this marker. To better understand the relationship, study The Carlisle Indian Industrial School marker shown.