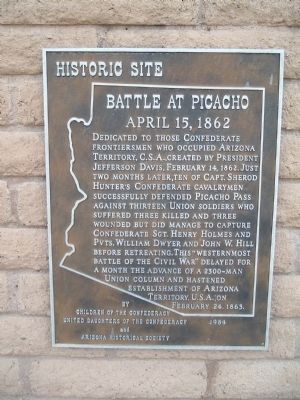 Photographed By Bill Kirchner, January 16, 2010
1. Battle at Picacho Marker
Inscription.
Battle at Picacho. April 15, 1862. Dedicated to those Confederate frontiersmen who occupied Arizona Territory, C.S.A., created by President Jefferson Davis, February 14, 1862. Just two months later, ten of Capt. Sherod Hunter's Confederate Cavalrymen successfully defended Picacho Pass against thirteen Union soldiers who suffered three killed and three wounded but did manage to capture Confederate Sgt. Henry Holmes and Pvts. William Dwyer and John W. Hill before retreating. This 'westernmost battle of the Civil War' delayed for a month the advance of a 2300-man Union column and hastened establishment of Arizona Territory, U.S.A. on February 24, 1863. . This historical marker was erected in 1984 by Children of the Confederacy United Daughters of the Confederacy and Arizona Historical Society. It is Near Picacho in Pinal County Arizona

Topics and series. This historical marker is listed in this topic list: War, US Civil. In addition, it is included in the United Daughters of the Confederacy series list. A significant historical date for this entry is February 14, 1934. 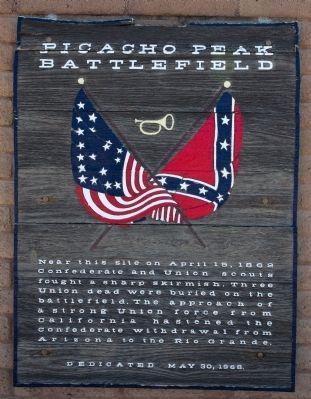 Photographed By Harold Colson, April 5, 2014
2. Adjoining wooden Picacho Peak Battlefield marker.
This marker has been removed as of July 25th, 2020.

Click or scan to see
this page online
W. Marker was near Picacho, Arizona, in Pinal County. Marker could be reached from Interstate 10. Marker is just to the south of the Picacho Peak State Park visitor's center. Touch for map. Marker was in this post office area: Picacho AZ 85141, United States of America. Touch for directions.

Related markers. Click here for a list of markers that are related to this marker. The Battle of Picacho Pass

Also see . . .  Picacho Peak. State Park site, with details on the battle and a video. Note the park will close in June 2010 due to budget cuts. (Submitted on January 28, 2010, by Craig Swain of Leesburg, Virginia.)

Additional commentary.
1. Park closes in summer
Picacho Peak State Park closes during the summer months (typically from around mid-May to mid-September); it is open the rest of the year.
— Submitted 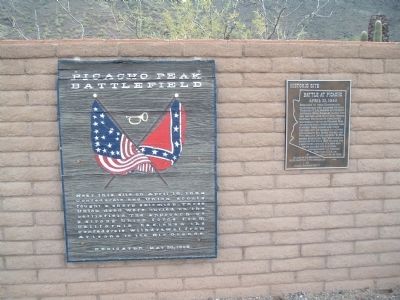 Photographed By Bill Kirchner, January 16, 2010
3. Battle at Picacho Marker
April 11, 2014, by Harold Colson of San Diego, California.
2. Marker stolen in June 2020.
According to a spokesperson for the Arizona State Parks and Trails Park, this plaque was stolen in June. Officials notified authorities and the Arizona Historical Society at the time. It has not been recovered. In July the nearby wooden marker was removed.
— Submitted July 26, 2020, by Mark Hilton of Montgomery, Alabama. 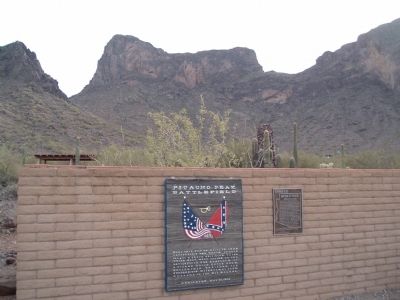