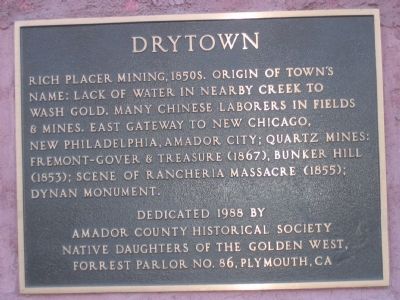 Topics and series. This historical marker is listed in this topic list: Cemeteries & Burial Sites. In addition, it is included in the Native Sons/Daughters of the Golden West series list.

Location. 38° 26.462′ N, 120° 51.312′ W. Marker is in Drytown, California, in Amador County. Marker is on Hanford Street (State Highway 49), on the right when traveling south. Marker is on a building now used as an antique store. Touch for map. Marker is in this post office area: Drytown CA 95699, United States of America. Touch for directions.

Other nearby markers. At least 8 other markers are within 3 miles of this marker, measured as the crow flies. Early Day Butcher Shop (a few steps from this marker); Salute to Early Amador Miners 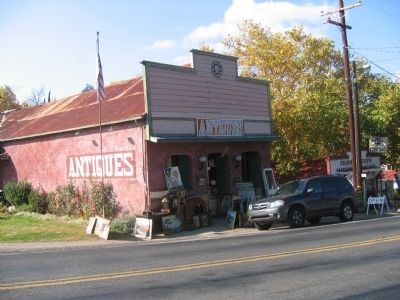 Also see . . .  The Last Californian: An Historical Novel of the Rancheria Massacre. This book, originally published in 1987, is an historical novel regarding the 1855 Rancheria Massacre. A Joaquin Murietta outlaw band killed several local residents, including some from the Dynan family who operated a hotel in nearby Lower Rancheria.

A roadside granite marker, near the Rancheria Massacre site, marks the graves of Dynan family members, including Mary who was one of those killed by bandits on Aug 6, 1855. This work of remembrance was erected in 1941 R. H. Dynan, a grandson of Michael Dynan. (Submitted on August 19, 2008, by Kevin W. of Stafford, Virginia.)

Additional comments.
1. Dynan Family
Norma McCabe (granddaughter of R.H. Dynan and contributor of photos #3 and #4) supplied the following information:
“The Last Californian” publication states that John was the proprietor of the Dynan 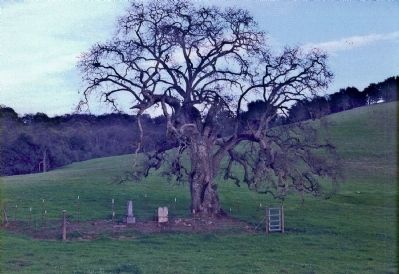 By N. McCabe, May 2000
3. The "Parsons Plot" Cemetery Near the Dynan Monument
Hotel. This information is incorrect. John was the son of Michael Dynan and his second wife, Ann.
— Submitted February 16, 2009, by Syd Whittle of El Dorado Hills, California.
2. The Dynan Monument
Rancheria Massacre: Not many monuments recall the racial animosity of California's Gold Rush history.
One that does is virtually impossible to find, and only obliquely refers to the tragic episode associated with it.
It rises from a long, convex slab of concrete high on a slope of private cattle land east of Drytown in Amador County.
The lonely monument overlooks the site of Lower Rancheria, the setting for the start of perhaps the bloodiest encounter between California Mexicans and immigrant gringos who disrupted their lives.
In 1855, about a dozen displaced Californians, most of them Mexicans, revolted.
In one day they killed six people and robbed several Chinese mining camps in and about Lower Rancheria.
That was just the start of a virtual race war along the foothills, with innocent Mexicans killed, the Chilean neighborhood of Drytown burned, and Amador County's first sheriff, William Phoenix, mortally wounded in a gunbattle.
Before calm was restored to the area, as many as 17 Mexicans may have been killed and all others had been expelled from 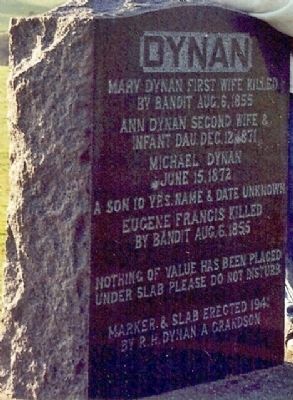 
Marker and Slab Erected 1941
by R. H. Dynan, a Grandson
Note: Marker is located on private property on Turner Road between New Chicago and Mayflower Roads.
the county.
The tombstone pays tribute to two of the victims, Mary Dynan and Eugene Francis, both "killed by bandit" on Aug. 5, 1855.
Source:
http://www.calgoldrush.com/lb_sets/01maptopast.html
— Submitted February 28, 2009, by Syd Whittle of El Dorado Hills, California.
3. "Parsons Plot" Cemetery Site Seen in Photo No. 3
Captain Nathaniel Parsons was an early resident of Lower Rancheria and was present at the August 1855 “incident”. He was the proprietor of the Rancheria House sometime after 1855. He owned the land, having homesteaded it in 1864, where the cemetery is located. This cemetery is referred to by descendants as the "Parsons Plot".

Upon Nathaniel’s death in 1886, the land was occupied by his son-in-law John Howe Miller (husband of Harriet who had passed in 1878) and his family.

Subsequent family members are also at rest in this cemetery. Maude (1871 – 1911) daughter of John and Harriet Miller, Thomas Dynan, Sr. (1861 – 1923), Mary T. (Miller) Dynan (1873 – 1904, wife of Thomas Dynan, Sr. and daughter of John H. and Harriet Miller.) These are descendants of the Dynan Family that were present at the “incident” on August 6, 1855. As far as I know, the folks that were victims of the 1855 tragedy were buried in the vicinity of the Dynan Monument, which is located Northeast of the cemetery.