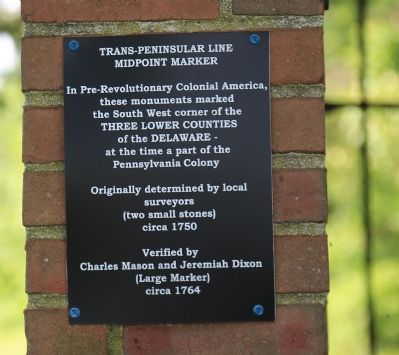 Photographed By J. J. Prats, May 17, 2014
1. Trans-Peninsular Line Midpoint Marker
Inscription.
Trans-Peninsular Line Midpoint Marker. . In Pre-Revolutionary Colonial America, these monuments marked the South West corner of the Three Lower Counties of the Delaware, at the time a part of the Pennsylvania Colony. , Originally determined by local surveyors (two small stones) circa 1750. , Verified by Charles Mason and Jeremiah Dixon (Large Marker) circa 1764. . This historical marker is Near Delmar in Wicomico County Maryland

In Pre-Revolutionary Colonial America, these monuments marked the South West corner of the Three Lower Counties of the Delaware—at the time a part of the Pennsylvania Colony.

Verified by Charles Mason and Jeremiah Dixon (Large Marker) circa 1764.

Topics. This historical marker is listed in these topic lists: Colonial Era • Political Subdivisions • Settlements & Settlers. A significant historical year for this entry is 1750.

Location. 38° 27.604′ N, 75° 41.62′ W. Marker is near Delmar, Maryland, in Wicomico County. Marker is on Delmar Road (Maryland Route 54) west of the state line with Delaware. Maryland Route 54 continues as Delaware Route 54 a few hundred feet east of this location. Marker is between Delmar, Delaware, and Mardela Springs, Maryland. Touch for map. Marker is in this post office area: Delmar MD 21875, United States of America. Touch for directions.

Other nearby markers. At least 8 other markers are within 4 miles of this marker, measured as the crow flies. "Old Spring Hill" (approx. 2.3 miles away); The Four Immortal Chaplains (approx. 2.4 miles away); Mason-Dixon Stone 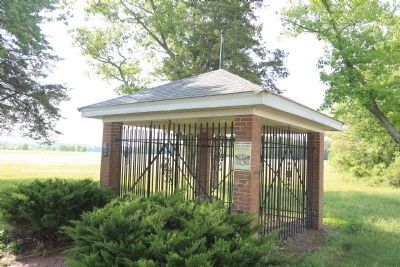 Photographed By J. J. Prats, May 17, 2014
2. Trans-Peninsular Line Midpoint Marker
This historical marker is on the left column of this caged gazebo. On the right column is a sign for the Delaware History Trail. This is stop S9858.

More about this marker. There is a nice little roadside pullout parking area for this marker.

Also see . . .
1. Wikipedia Entry for Transpeninsular Line. “In 1751, a line was surveyed straight across the Delmarva Peninsula beginning at what at least some early Swedish settlers called Cape Hinlopen, which was to be the southern boundary of Delaware. This place is better known as Fenwick Island. Twenty-four miles north is another cape named Cape Henlopen near Lewes, Delaware. Various spellings of henlopen mean "entering in" or "approaching." The confusion of the names was the crux of a long standing dispute between the Penns (Delaware) and the Calverts (Maryland), the latter claiming that the Lewes' cape should have been the start of the boundary line. Ironically, it was a map commissioned by Charles Calvert in 1732, which showed Cape Hinlopen at Fenwick Island, that was used to decide the matter. Calvert had intended the Lewes' cape to be so named, but he only discovered the mistake after 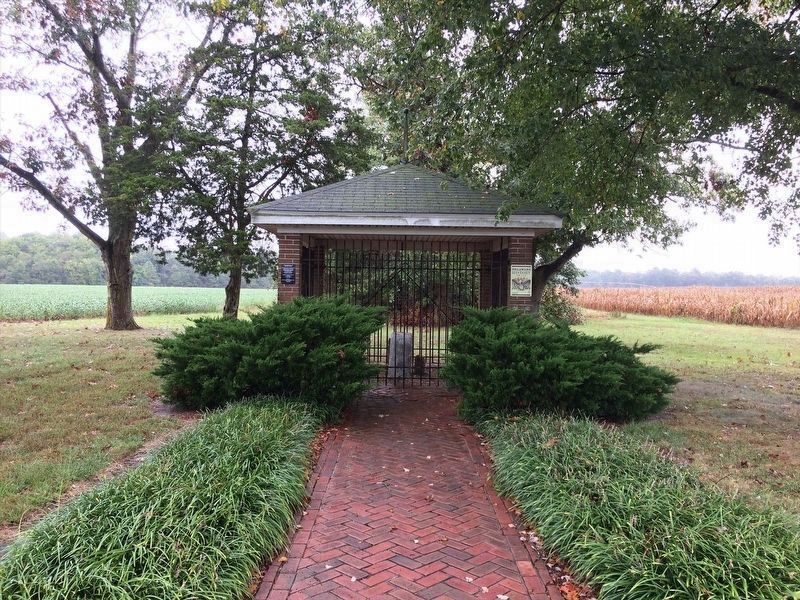 Photographed By Adam Margolis, September 15, 2019
3. Trans-Peninsular Line Midpoint Marker Marker
Looking north, directly along the Mason Dixon line. Note, the line does not officially begin until you are north of the Mason-Dixon marker that is inside this "building". Therefore, the line is directly behind this building from the photo's POV. Delaware territory is located on the right and includes the entire field on the right. Nearly everything else is Maryland territory, including where I am standing.
he had submitted it to the English court deciding the case. He failed in his later attempts to have the court reject his own map. If the actual Cape Henlopen near Lewes had been used as the start of the line, Delaware would be about one thousand square miles smaller, over a third of its current area. The line was accepted by Charles Mason and Jeremiah Dixon (of Mason–Dixon line fame) in 1763 when they were engaged to survey the borders between Maryland and the grants to William Penn (Pennsylvania and Delaware).” (Submitted on June 1, 2014.)

2. Wikipedia Entry for Mason-Dixon Line. “The disputants engaged an expert British team, astronomer Charles Mason and surveyor Jeremiah Dixon, to survey what became known as the Mason–Dixon line. It cost the Calverts of Maryland and the Penns of Pennsylvania £3,512/9 s to have 244 miles (393 km) surveyed with such accuracy. To them the money was well spent, for in a new country there was no other way of establishing ownership.” (Submitted on June 1, 2014.) 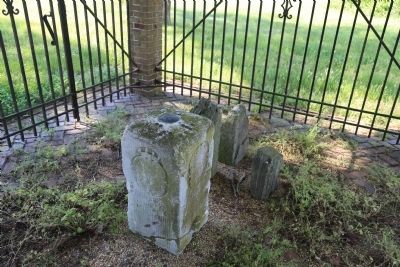 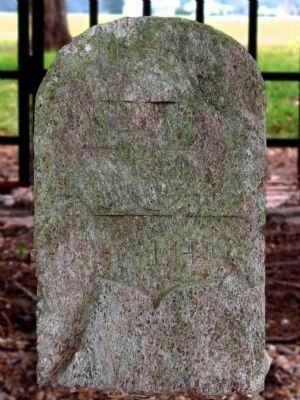 Photographed By Allen C. Browne, December 28, 2007
5. Original Middle Point Marker
The first team of surveyors set this stone 32 inches away from the middle point, after the sons of William Penn and Frederick Calvert, Lord Baltimore agreed that the middle point would be 69 miles, 289 perches west of the stone at Fenwick Island. This photo shows the remnants of the Penn coat of arms, the Calvert arms on the other side has disappeared. 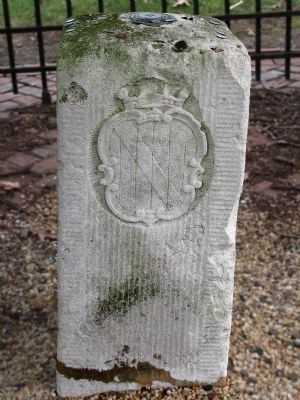 Photographed By Allen C. Browne, December 28, 2007
6. Mason-Dixon Middle Point Marker
Mason and Dixon placed this double Crown Stone at the middle point in 1768 after completing the rest of their survey. It has the Calvert Arms on the south and west sides and the Penn arms on the north and east sides (Calvert arms shown). These markers are carved from oolitic limestone imported from England. 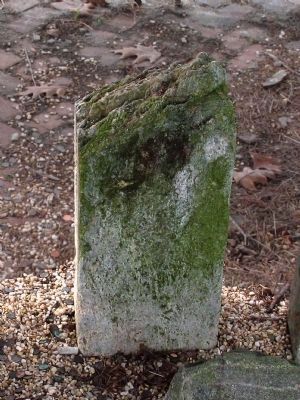 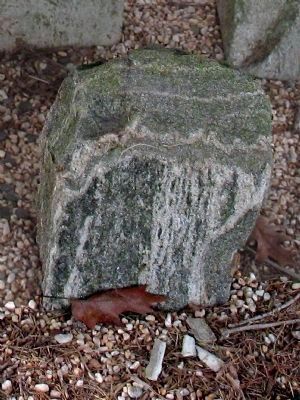 Photographed By Allen C. Browne, December 28, 2007
8. Unrelated Stone
"There is one unmarked stone in the pavilion. Its presence was a mystery until the day of the restoration of the Middle point monument (in 1985). A boundary explorer informed me that his grandfather had found the stone, thought it resembled the stone north of the Middle point monument, so he placed the dark grey stone there. It has no official significance!" -- East of the Mason-Dixon Line by Roger E. Nathan, 2000. 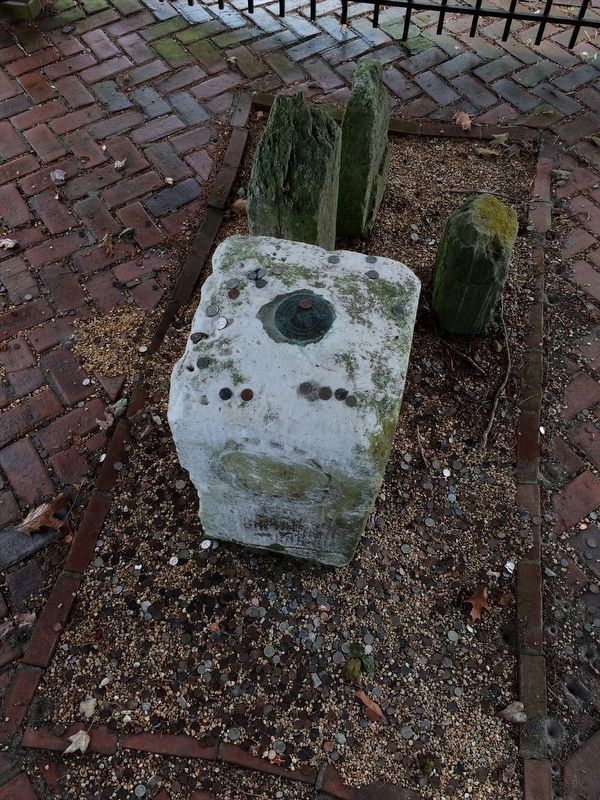