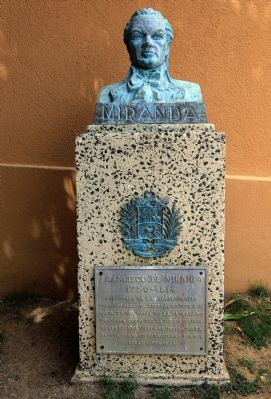 English translation:
Forerunner of Latin American independence. General in Chief of the Northern Army in the French Revolution. He fought for the independence of the United States of North America. He was imprisoned in this city for his liberal ideals.

Erected by the Republic of Venezuela.

Topics. This historical marker is listed in these topic lists: Colonial Era • Hispanic Americans • Patriots & Patriotism. A significant historical year for this entry is 1810. 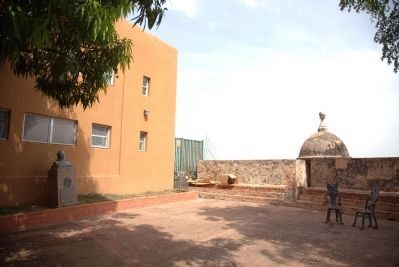 Click or scan to see
this page online
7.012′ W. Marker is in San Juan Antiguo in Municipio de San Juan, Puerto Rico. Marker is at the intersection of Calle Tetuan and Calle San José on Calle Tetuan. It is in a small park at the foot of San José Street in old San Juan. Touch for map. Marker is in this post office area: San Juan PR 00901, United States of America. Touch for directions.

Regarding Francisco de Miranda. Daniel Florence O’Leary, aide-de-camp to Simón Bolívar, said of Miranda’s death: “Miranda was a man of the eighteenth century whose genius lay in raising the consciousness and confidence of his fellow Americans. Although he prided himself on being a soldier, his greatest battles were fought with his pen.” —source: Wikipedia Entry 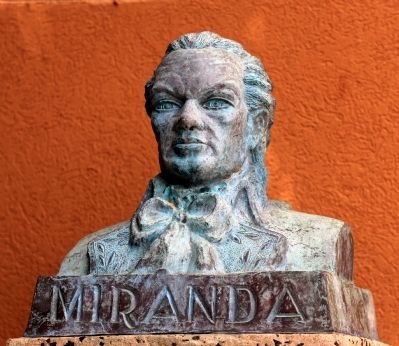 Photographed By J. J. Prats, June 4, 2014
3. Francisco de Miranda (1750–1814)
a Venezuelan revolutionary. Although his own plans for the independence of the Spanish American colonies failed, he is regarded as a forerunner of Simón Bolívar, who during the Spanish American wars of independence successfully liberated a vast portion of South America. Miranda led a romantic and adventurous life. An idealist, he developed a visionary plan to liberate and unify all of Spanish America but his own military initiatives on behalf of an independent Spanish America ended in 1812. He was handed over to his enemies and four years later, in 1816, died in a Spanish prison. Within fourteen years of his death, however, most of Spanish America was independent.” (Submitted on June 6, 2014.)
Credits. This page was last revised on September 12, 2020. It was originally submitted on June 6, 2014, by J. J. Prats of Powell, Ohio. This page has been viewed 587 times since then and 44 times this year. Photos:   1, 2, 3. submitted on June 6, 2014, by J. J. Prats of Powell, Ohio.
Share this page.