Only Battlefield On Vermont Soil 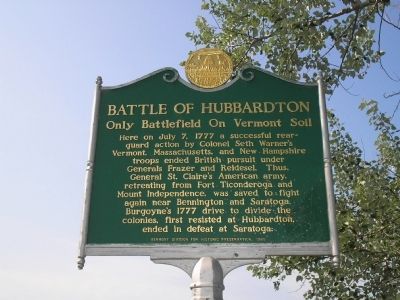 By Bill Coughlin, July 12, 2008
1. Battle of Hubbardton Marker
Inscription.
Battle of Hubbardton. Only Battlefield On Vermont Soil. . Here on July 7, 1777 a successful rearguard action by Colonel Seth Warner’s Vermont, Massachusetts, and New Hampshire troops ended British pursuit under Generals Frazer and Reldesel. Thus, General St. Claire’s American army, retreating from Fort Ticonderoga and Mount Independence, was saved to fight near Bennington and Saratoga. Burgoyne’s 1777 drive to divide the colonies, first resisted at Hubbardton, ended in defeat at Saratoga. . This historical marker was erected in 1989 by Vermont Division for Historic Preservation. It is in Hubbardton in Rutland County Vermont

Topics and series. This historical marker is listed in these topic lists: Military • Notable Events • Notable Places • War, US Revolutionary. In addition, it is included in the Battlefield Trails - Revolutionary War series list. 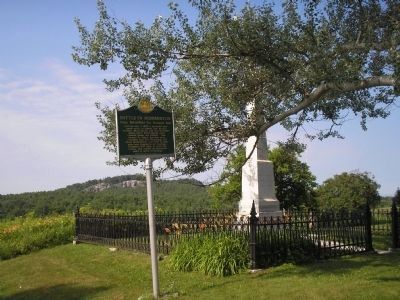 By Bill Coughlin, July 12, 2008
2. Marker in Hubbardton
Mt. Zion can be seen in the photo, beneath the marker. The entire battlefield is visible from the summit, which might have been used by Tory and Indian scouts to spy on the American Army prior to the battle.
this marker, measured as the crow flies. Hubbardton Battle Monument (a few steps from this marker); Germans Arrive, Americans Retreat (within shouting distance of this marker); Welcome to Hubbardton Battlefield State Historic Park (within shouting distance of this marker); The Selleck Cabin (about 600 feet away, measured in a direct line); British Flank Near Mt. Zion (about 700 feet away); Monument Hill Charge (about 700 feet away); Dawn Attack (approx. 0.2 miles away); Slate Pencil Manufacturing (approx. 3.3 miles away). Touch for a list and map of all markers in Hubbardton.

Related markers. Click here for a list of markers that are related to this marker. This series of markers tell the story of the Battle of Hubbardton.

Also see . . .
1. Hubbardton Battlefield State Historic Site. One of the most successful rear guard actions in American history, the Battle of Hubbardton was the only Revolutionary War battle fought entirely in Vermont. (Submitted on July 14, 2008, by Bill Coughlin of North Arlington, New Jersey.) 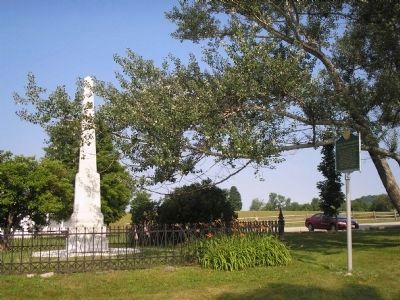 By Bill Coughlin, July 12, 2008
3. Marker on Hubbardton Battlefield
This photo looks toward Monument Hill, where the Americans made a valiant stand against the charging British troops. 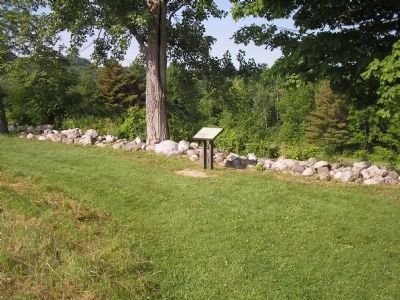 By Bill Coughlin, July 12, 2008
4. Stone Wall on Monument Hill
American forces used this stone wall atop Monument Hill for cover as they attempted to hold off the charging British troops. 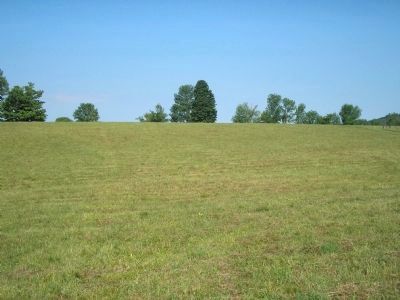