— the Seneca half of the Shawnee Reservation at Lewistown — 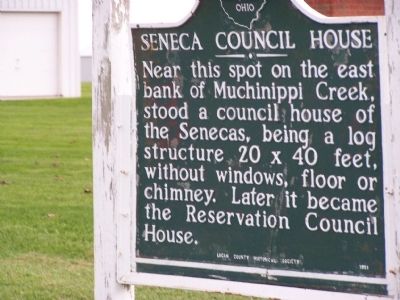 Seneca Council House
Near this spot on the east bank of Muchinnippi Creek, stood a council house of the Seneca, 20 x 40 feet, without windows, floor or chimney. Later it became the Reservation Council House.

Indian Reservation
This reservation of 40,300 acres, was set aside for the Indians by the U. S. Government. Following a treaty with the Indians in 1817, Seneca and Shawnee tribesmen occupied the land until they were moved west in 1832.

Other nearby markers. At least 8 other markers are within 3 miles of this marker, measured as the crow flies. Lakeview Amvets Memorial #1 (approx. 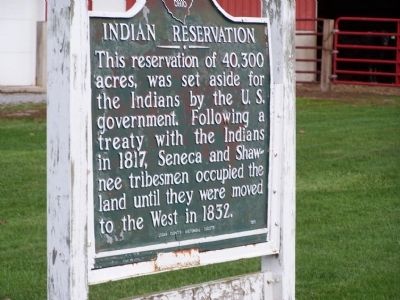 More about this marker. marker is located in a well maintained green space, between a farmhouse and barn

Regarding Seneca Council House / Indian Reservation. Part of the text of the treaty that dissolved the reservation;

ARTICLE 1.
The Seneca and Shawnee Indians, residing at and around Lewistown in the State of Ohio, in consideration of the stipulations herein made on the part of the United States, do for ever cede, release and quit claim to the United States, the lands granted to them by patent in fee simple by the sixth article of the treaty made at the foot of the rapids of the Miami river of Lake Erie, on the twenty-ninth day of September, in the year 1817, containing forty-eight square miles, and described in said treaty as follows:—“Beginning at the intersection of the line run by Charles Roberts in the year one 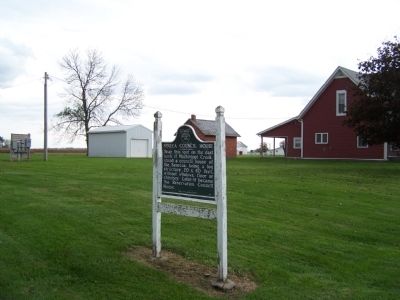 By Rev. Ronald Irick, October 21, 2013
3. Seneca Council House / Indian Reservation
thousand eight hundred and twelve, from the source of the Little Miami river, to the source of the Scioto river, in pursuance of instructions from the commissioners appointed on the part of the United States, to establish the western boundary of the Virginia military reservation, with the Indian boundary line established by the treaty of Greenville in one thousand seven hundred and ninety-five from the crossings above Fort Lawrence to Loramie's store, and to run from such intersection, northerly, with the first mentioned line, so as to include the quantity as nearly in a square form as practicable, after excluding the section of land granted to Nancy Stewart.” And the said Senecas and Shawnees also cede to the United States, in manner aforesaid, one other tract of land, reserved for them by the second article of the treaty made at St. Mary's, in Ohio, on the seventeenth of September, in the year 1818, which tract is described in said treaty as follows:—“Eight thousand nine hundred and sixty acres, to be laid off adjoining the west line of the reserve of forty-eight square miles at Lewistown.” 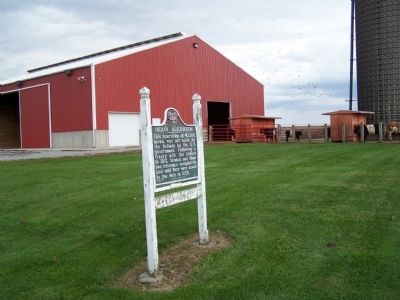 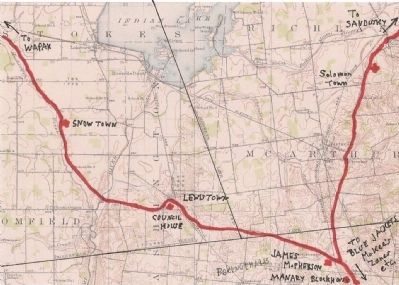