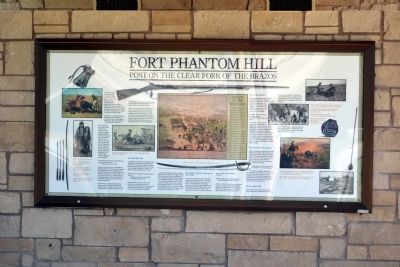 By 1850 new settlers and travelers to the California Gold Rush were moving across Texas. This movement on the open plains increased hostilities between the newcomers and the Indians. The U.S. Army’s solution was a fort, called the Post on the Clear Fork of the Brazos. The Post was part of a line of forts built to defend the western frontier of Texas from Comanche raiders.

I directed that “... 5 Companies be posted ... at the junction of the two branches of the Clear fork and near many villages of Indians lying a little east of the position ...”
– General Persifor F. Smith, 1851

U.S. Army Colonel John J. Abercrombie arrived here on November 14, 1851, with five companies of 5th Infantry soldiers, officers, wagons, wagon drivers and supplies. His orders were to build a fort at the place called “Phantom Hill,” patrol for Indians, and to protect settlers and travelers in the area. The place was named Phantom Hill, because the ridge above the Clear Fork River seemed to disappear as it was approached. 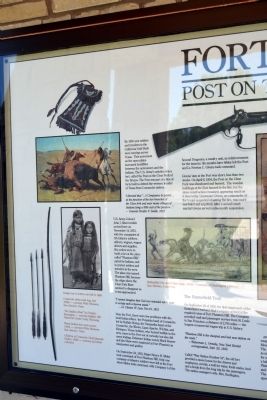 Near the Fort, there were few problems with the local Indian tribes: the Penateka band of Comanche led by Buffalo Hump, the Yamparika band of the Comanche, the Kiowa, Lipan Apache, Wichita, and Kickapoo. These Indians, who hunted buffalo in the area, came to the Fort out of curiosity but also did some trading. Delaware Indian scouts Black Beaver and Jim Shaw were employed at Fort Phantom as interpreters and guides.

On September 24, 1853, Major Henry H. Sibley took command of Fort Phantom Hill. Only one company of infantry soldiers were left at the Fort when Sibley took command, with Company I of the Second Dragoons, a cavalry unit, as reinforcements for the infantry. Six months later Sibley left the Fort and Lt. Newton C. Givens took command.

Givens’ stay at the Fort was short, less than two weeks. On April 6, 1854, the Post on the Clear Fork was abandoned and burned. The wooden buildings of the Fort burned in the fire, but the stone construction remained, appearing much as it does today. Lieutenant Givens, as commander of the troops suspected of setting the fire, was court-martialed and acquitted. After a second court-martial Givens served a nine-month suspension.

On September 22 of 1858, the first stagecoach of the Butterfield 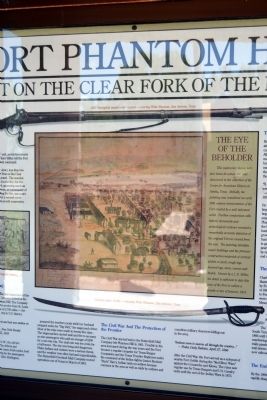 Called “Way Station Number 54", the old fort provided a stone house for the drivers and employees, corrals, a well for water, fresh mules, food and a break from the long trip for the passengers. The station manager’s wife, Mrs. Burlington, prepared the travelers meals while her husband swapped mules for “Big Dick,” the stagecoach driver. Most of the trips were made in twenty-five days. The stagecoaches carried mail and five to as many as nine passengers who paid an average of $200 for a one-way trip. The mail rate was ten cents for a half-ounce. The trip was tiring and dangerous. Plains Indians and outlaws were a serious threat, and the weather was often bad and unpredictable. The Butterfield Overland Mail Company moved operations out of Texas in March of 1861.

The Civil War And The Protection of the Frontier

The Civil War started before the Butterfield Mail Company left Phantom Hill in 1861. Trouble in the area increased 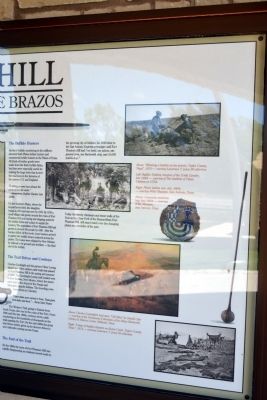 Photographed By Duane Hall, June 9, 2014
4. Fort Phantom Hill Marker (Right Side)
during the war years and the Fort became a regular campsite for Texas Ranger Companies and the Texas Frontier Regiment under the command of the Indian fighter James Buckner “Buck” Barry. Indian raids on settlers became common in the area as well as raids by outlaws and countless military deserters hiding out in the area.

After the Civil War, the Fort served as a sub-post of nearby Fort Griffin during the “Red River Wars” against the Comanche and Kiowa. The ruins saw regular use by Texas Rangers and U.S. Cavalry units until the end of the Indian Wars in 1872.

Herds of buffalo numbering in the millions attracted both Plains Indian hunters and commercial buffalo hunters to the Plains of Texas. All kinds of leather goods were made from the thick buffalo hides, but they were especially useful for making the large belts that turned the machines in the factories of the eastern U.S. and England.

On the Southern Plains, where the largest herds lived, the slaughter began in 1874 and was over by 1878. By 1876 a small village had 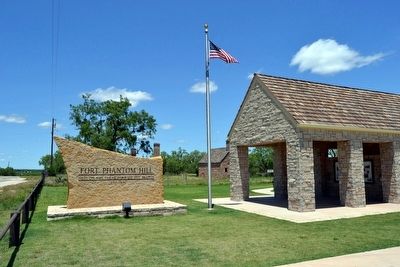 Photographed By Duane Hall, June 9, 2014
5. Fort Phantom Hill Visitor Pavilion
Marker is inside the open air section of the pavilion
grown around the ruins of Fort Phantom Hill as a buying and shipping point for the buffalo hides and a place to supply the hunters. The population of Fort Phantom Hill had grown to around 500 people by 1880. After the hunters killed off the herds, bone haulers arrived to gather the buffalo bones scattered across the prairie. The bones were shipped to New Orleans by railroad to be ground into fertilizer—the final end of the buffalo.

The Trail Drives and Cowboys

Charles Goodnight and his partner Oliver Loving blazed one of the earliest cattle trails that passed by Fort Phantom Hill in the spring and summer of 1866. The Goodnight-Loving trail headed west to Fort Sumner, New Mexico, where the steers were sold to the Army for the Navajo and Mescalero Apache Indians. The breeding cows were driven to Colorado.

“Other states were carved or born, Texas grew from hide and horn.” – Berta Hart Nance

The Western Trail, going to Kansas from South Texas, also ran by the ruins of the Fort. From 1866 until the late 1880s, cowboys drove cattle numbering in the hundreds of thousands on the trails passing the Fort. By the mid 1880s the great trail drives ended, given up for shorter drives to new railroads running across Texas.

The End of the Trail

By the 1890s the town of Fort Phantom Hill 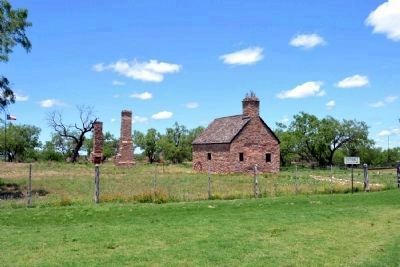 Today the stately chimneys and stone walls of the Post on the Clear Fork of the Brazos River, Fort Phantom Hill, still stand watch over the changing plains as a reminder of the past.


The Eye of the Beholder

This watercolor shown here four times its actual size was discovered in the collection of the Center for American History in Austin, Texas. Initially, the painting was considered an early 20th century interpretation of the Fort created by a well informed artist. Further comparison with historic documents and archeological evidence revealed a remarkably accurate depiction of the original Fort as viewed from the east. The painting identifies major buildings and the primary construction materials of vertical pickets or jacal, rough logs, hewned logs, stone, canvas and thatch. Drawn by a J.B. Miller, his detail is sufficient to date this view of the Fort to within a month or two of January 1853.

Topics and series. This historical marker is listed in these topic lists: Communications • Forts and Castles 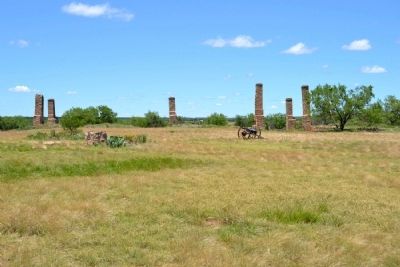 Photographed By Duane Hall, June 9, 2014
7. Officer's Quarters, North Group
• Settlements & Settlers • Wars, US Indian. In addition, it is included in the Butterfield Overland Mail series list. A significant historical date for this entry is November 14, 1851. 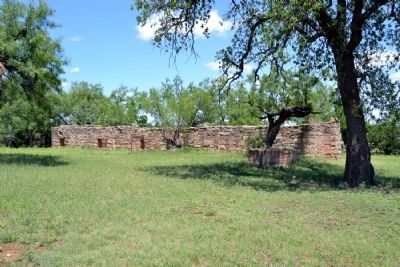 Photographed By Duane Hall, June 9, 2014
8. Stone Commissary
Foundation with abundant information and photographs on the fort. (Submitted on June 23, 2014.) 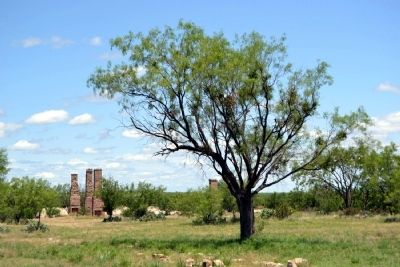