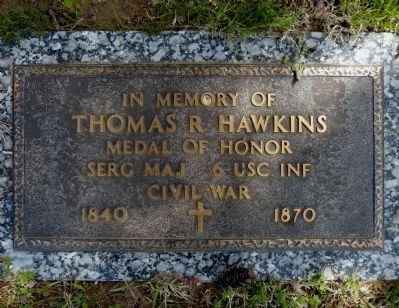 Topics and series. This historical marker is listed in these topic lists: African Americans • War, US Civil. In addition, it is included in the Medal of Honor Recipients series list. A significant historical year for this entry is 1840. 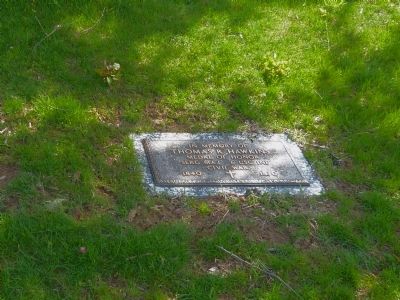 Click or scan to see
this page online
(approx. ¾ mile away); Highland Park High School (approx. 0.9 miles away). Touch for a list and map of all markers in Hyattsville.

More about this marker. 23 year-old, 5 foot 4 inch plasterer, Thomas Hawkins enlisted for 3 years in the 6th USC Infantry on the 4th of August 1863 as a substitute for Henry Passmore of number 824 Shipping Street Philadelphia. He was promoted Sergeant Major on August 22, 1862 and rescued the regimental colors at the Battle of Deep Bottom on July 21, 1864. He was discharged May 20, 1865 on account of wounds. He received his Medal of Honor on February 8, 1870 and died a month later on March 29, 1870. 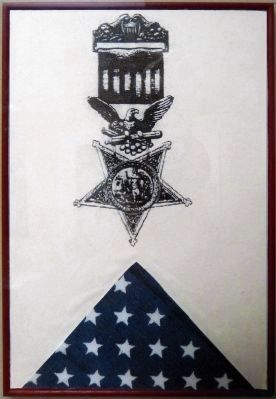 Photographed By Allen C. Browne, April 19, 2014
3. Medal of Honor & Folded Flag
from a display in the Harmony National Cemetery Office 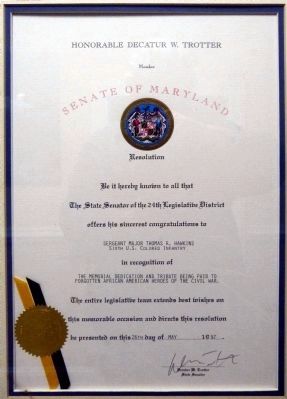 Photographed By Allen C. Browne, April 19, 2014
4. Resolution
Be it hereby known to all that The State Senator of the 24th District offers his sincerest congratulations to Sergeant Major Thomas R. Hawkins, Sixth U.S. Colored Infantry. The entire legislative team extends best wishes on this memorable occasion and directs this resolution be presented on this 26th day of May 1997.
Decatur W. Trotter
State Senator
from a display in the Harmony National Cemetery Office 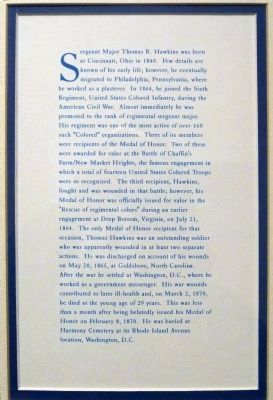 Photographed By Allen C. Browne, April 19, 2014
5. Biography
Sergeant Major Thomas R. Hawkins was born at Cincinnati, Ohio in 1840. Few details are known of his early life; however, he eventually migrated to Philadelphia, Pennsylvania, where he worked as a plasterer. In 1864, he joined the Sixth Regiment, United States Colored Infantry, during the American Civil War. Almost immediately he was promoted to the rank of regimental sergeant major . His regiment was one of the most active of over 160 such "Colored" organizations. Three of its members were recipients of the Medal of Honor. Two of these were awarded for valor a the Battle of Chaffin's Farm/New Market Heights, the famous engagement in which a total of fourteen United States Colored Troops were so recognized. The Third recipient, Hawkins fought and was wounded in that battle; however, his Medal of Honor was officially issued for valor in the "Rescue of regimental colors" during an earlier engagement at Deep Bottom, Virginia, on July 21,1864. The only Medal of Honor recipient for that occasion, Thomas Hawkins was an outstanding soldier who was apparently wounded in at least two separate actions. He was discharged on account of his wounds on May 20, 1865, at Goldsboro, North Carolina. After the war he settled in Washington D. C., where he worked as a government messenger. His war wounds contributed to later ill-health and , on March 2, 1870, he died at the young age of 29 years. This was less than a month after being belatedly issued his Medal of Honor on February 8, 1870. He was buried at Harmony Cemetery at its Rhode Island Avenue location, Washington, D. C.
from a display in the Harmony National Cemetery Office 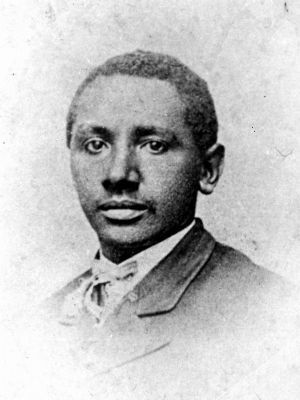