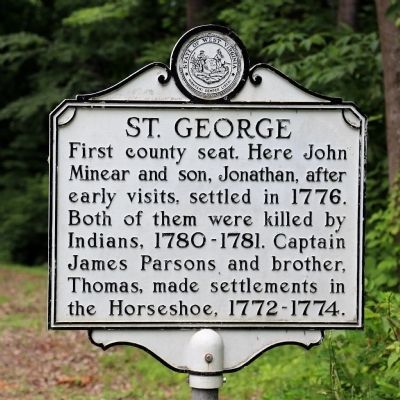 First county seat. Here John Minear and son, Jonathan, after early visits, settled in 1776. Bot of them were killed by Indians, 1780–1781. Captain James Parsons and brother, Thomas, made settlements in the Horseshoe, 1772–1774.

Topics and series. This historical marker is listed in these topic lists: Colonial Era • Native Americans • Political Subdivisions • Settlements & Settlers. In addition, it is included in the West Virginia Archives and History series list. A significant historical year for this entry is 1776.

Other nearby markers. At least 8 other markers are within 5 miles of this marker, measured as the crow flies. Capture of St. George / Imboden’s Expedition (approx. 0.3 miles away); Jonathan Minear (approx. 2 miles away); Flood of November 4-5, 1985 Memorial 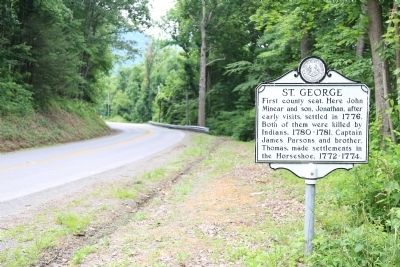 More about this marker. Marker is across the river from St. George, but trees and foliage does not allow you to see the town.

Also see . . .  Wikipedia Entry. Originally known as Fort Minear and then as Westernford, St. George was settled in 1774 by German immigrant John Minear and his son, Jonathan, after early scouting visits to the area. In 1856, an act creating the county specified that Tucker's county court was to be held on the lands of Enoch Minear, descendant of Jonathan Minear. The town was then renamed Saint George in honor of Henry St. George Tucker, Jr. (1828–63), the son of the county's namesake, Henry St. George Tucker, Sr. (1780–1848).

Editor’s want-list for this marker. Photos of the town and of St. George Academy. • Can you help?
Share this page.