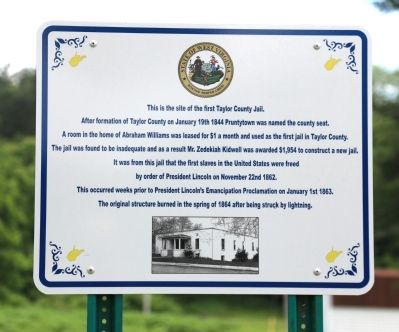 This is the site of the first Taylor County Jail. After the formation of Taylor County on January 19th, 1844, Pruntytown was named the county seat. A room in the home of Abraham Williams was leased for $1 a month and used as the first jail in Taylor County. The jail was found to be inadequate and as a result Mr. Zedekiah Kidwell was awarded $1,954 to construct a new jail.

It was from that jail that the first slaves in the United States were freed by order of President Lincoln on November 22nd, 1862. This occurred weeks prior to President Lincoln’s Emancipation Proclamation on January 1st, 1863.

Topics and series. This historical marker is listed in these topic lists: Notable Buildings • War, US Civil. In addition, it is included in the Former U.S. Presidents: #16 Abraham Lincoln series list. A significant historical month for this entry is January 1881. 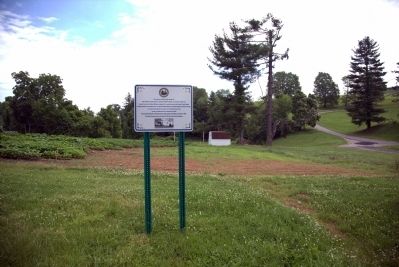 Click or scan to see
this page online
(County Route 18) south of U.S. 50, on the left when traveling south. It is on County Road 18 between US 50 and US 250. Touch for map. Marker is in this post office area: Grafton WV 26354, United States of America. Touch for directions.