Site of the Town of Linnville 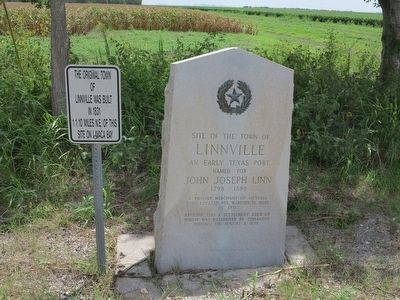 By Richard Denney, July 3, 2014
1. Site of the Town of Linnville Marker
Sign next to marker reads "The original town of Linnville was built in 1831 1 1/10 miles N.E. of this site on Lavaca Bay".
Inscription.
Site of the Town of Linnville. .
An early Texas port named for John Joseph Linn 1789-1885 A pioneer merchant of Victoria who located his warehouse here in 1831 Around this a settlement grew up which was destroyed by Comanche Indians on August 8, 1840. . This historical marker was erected in 1936 by State of Texas. It is in Port Lavaca in Calhoun County Texas

Around this a settlement grew up
which was destroyed by Comanche
Indians on August 8, 1840

Other nearby markers. At least 8 other markers are within 10 miles of this marker, measured as the crow flies. Port Lavaca (approx. 2.2 miles away); Halfmoon Reef Lighthouse (approx. 2.3 miles away); Calhoun County Participation During World War II (approx. 2.9 miles away); 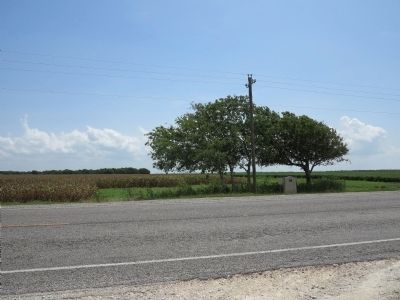 Related markers. Click here for a list of markers that are related to this marker. These markers provide context in which the raid on Linnville occurred.

Additional comments.
1. Context for the Raid in Republic of Texas History
The raid in August 1840 by Penateka Comanches, led by war chief Buffalo Hump, on Victoria and the Port of Linnville, on Lavaca Bay, Texas, is said to be the the largest raid by American Indians on cities in U.S. history (Texas was at the time still a republic). Linnville was sacked and burned

By Richard Denney
3. Site of the Town of Linnville Marker
Panorama from general location of Linnville looking SE to Lavaca Bay Causeway on TX highway 35. The bluff here is about a 20-30 foot drop to the bay.
by the Comanches, and the port was never rebuilt. Citizens of Linnville escaped to safety by taking to small boats and a schooner in the waters off the bay, watching as their town was burned to the ground.

The raid on Victoria and Linnville was one in a sequence of strikes and counter-strikes in Republic of Texas history that defined bitter relations between Comanches and Texans. See related markers link for information on each of these.

Events began with the Council House Fight in San Antonio, March 1840 in which Republic of Texas officials attempted to capture and take prisoner a large number of Comanche chiefs who had come to negotiate a peace treaty, killing them together with dozens of their family and followers.

The Comanche raid on Victoria and Linnville in August of 1840 was in revenge for the ambush at the Council House Fight.

The Battle of Plum Creek, near Lockhart Texas, shortly after the raid on Linnville, was Texans' retaliation against Comanches in their retreat from Linnville.

And finally, The Comanche Village Massacre in Octorber 1840, was revenge by Texans for the raid on Victoria and Linnville by striking Penateka Comanches in their homeland near what is now Colorado City.
— Submitted July 5, 2014, by Richard Denney of Austin, Texas. 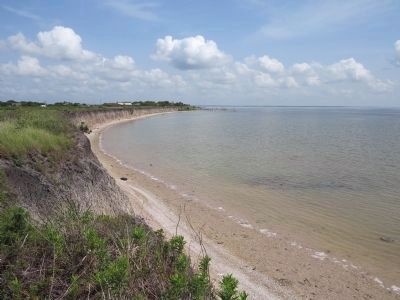